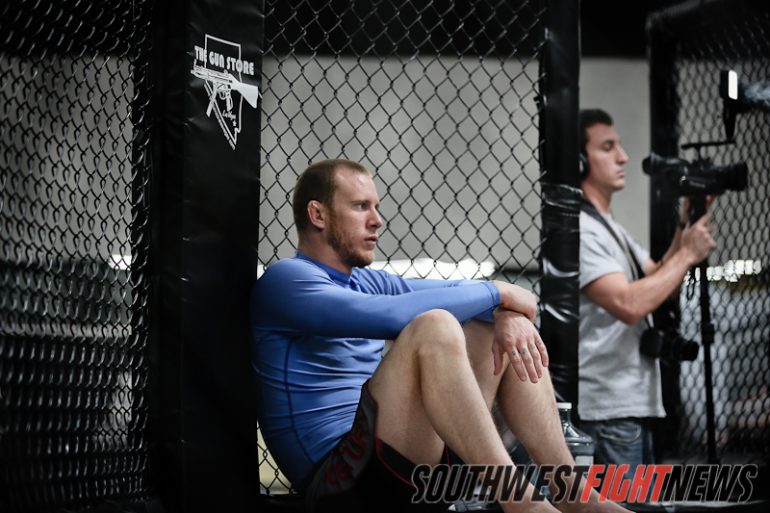 Not everyone can be the headlining act atop a star-studded fight card. However, the argument can be made that being the opening act on a fight card headlined by Boxing World Champion turned MMA prospect Holly Holm may be just as notable. The two main-card fighters scheduled for the opening act have the chance to set the pace and crowd excitement for a fight card that is sure to have loads of attention attached to it. A pair of fighters, one of which New Mexico trained and the other making the trip from Texas will have the opportunity to set the bar high for the main card of Friday night’s “Havoc” fight card.

When Fresquez Promotions hosts their first show of 2013 on December 6th inside the Route 66 Casino, the spotlight will be on retired Boxing World Champion and undefeated MMA fighter Holly Holm returning to New Mexico to fight inside the cage for the sixth time. Before that highly anticipated bout, Jackson-Winkeljohn product Clint Roberts (3-1) will face-off with Bushido MMA’s Eddie Gamboa (1-0) in what could be a show-stopping match-up between two very exciting 170-pound Welterweights.

Fans of the regional circuit should be able to recognize both Roberts and Gamboa as neither are strangers to the area. The locally trained Roberts has competed three times for the Jackon’s MMA Series and once for the Mescalero Warrior Challenge. Gamboa is El Paso based and aside from fighting in the El Paso area, he also came to Albuquerque for the Jackson’s MMA Series 11 event and upset the Jackson-Winkeljohn trained Brandon Jones by first round submission.

This fight has heavy intrigue based on the fact that both fighters are very dangerous in every area inside the cage. Roberts can be very tight and technical with his striking game but his last fight displayed the fight-changing power he possesses in his strikes. Roberts ended the fight against Geronimo Gonzales with a left hook just 17-seconds into the bout. Roberts has the ability to out-point fighters on the feet but also remains a dangerous foe capable of catching a power shot to end the fight early. 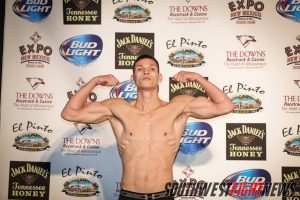 No stranger to the Albuquerque area, Bushido MMA’s Gamboa will look to spoil another hometown fighters night this Friday inside the Route 66 Casino.

Gamboa’s striking is dangerous when taking into consideration his length and his ability to transition his striking game into his grappling game which is very crafty. Gamboa is a physical specimen as he is in great shape and can really push the pace looking for a finish. A perfect, seven-fight amateur career truly groomed Gamboa well and has finished almost every fight with a submission after overwhelming fighters on the mat. The wrestling acumen of the Shane Schuman trained Gamboa is a big-time difference maker and it has seemed like each time Gamboa has wanted the fight to hit the mat, it does.

This fight gets even more interesting when you put into the equation that Roberts is very talented on the mat as well. In fact, Roberts has fought for the Jackson’s MMA Series three times and each time he has notched a submission victory. He has finished an arm-bar, a rear-naked choke and a triangle choke. That versatility makes his grappling game very unpredictable and dangerous. Being able to finish fights off of the back as well as from top position means that no matter how scrambles conclude, it is a bad spot with Roberts latched on to you.

The experience factor is arguably a wash because of Gamboa’s extensive amateur record. Despite Roberts having three more professional bouts, if we included amateur bouts than Gamboa in fact may hold cage-time experience.

Training camp advantage may go to the hometown fighter however as Roberts of course comes from the acclaimed Jackson-Winkeljohn gym where he receives elite level coaching and has arguably the best camp for sparring partners world-wide. In fact, Roberts has been fortunate to be in the same training camp as UFC top welterweight contender Carlos Condit. Condit is scheduled to fight on next weekend’s UFC On Fox event and Roberts joined Condit’s training camp as one of his primary sparring partners.

While Gamboa’s gym, Bushido MMA doesn’t have those accolades or recognizable names, they do in fact have a very respectable reputation. The Bushido MMA roster has not only found success in the New Mexico regional circuit they have found success on the national level. Several of their fighters are rising high in the rankings and the system being run by Head Coach Shane Schuman is getting a lot of acknowledgment from the surrounding areas as well as the respect from the Southwest’s combat community.

The fight pairing is another face-off between Bushido MMA and the Jackson-Winkeljohn camp. There have been several bouts featuring these two gyms competing versus one another and this match-up is another addition to the history between the two gyms.

If the records of these fighters are a teller, than fight fans may be wise to get to their seats early as the kick-off fight for this fight card could be fast-paced and could end early as both Roberts and Gamboa are extremely inept to finishing bouts. While the skill set may suggest the two could be participants in a “Fight of the Night” type fight, I would believe that due to the finishing abilities of each fighter that the winner of the bout could be the favorite to win the “Knockout or Submission of the Night”.

Stay tuned for more event coverage, bout breakdowns and analysis. We hope to see all of the fight fans in the area at Route 66 Casino on Friday night. For ticket information please call (505) 884-7484.