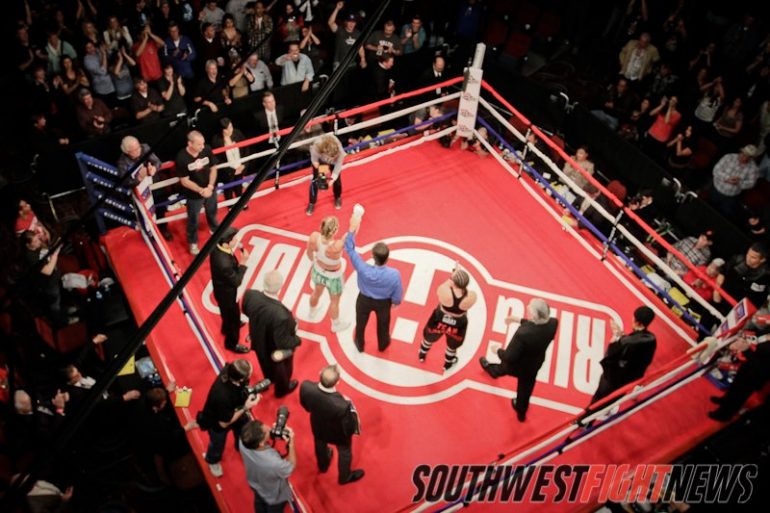 The women divisions within mixed martial arts are still on a progressive climb as the popularity of female fighters are surging upwards at a monumental pace. The year of 2013 has been arguably the biggest year for WMMA and with the emergence of superstar Ronda Rousey, the women now have a chance to shine brightly in the sport’s brightest lights. Albuquerque’s Holly Holm has been a World Champion Boxer for several years and has also been the State of New Mexico’s biggest draw in terms of headlining acts. While WMMA is finally getting the attention it deserves, Holm has been a superstar in New Mexico for some time.

After her retirement from Boxing, Holm focused 100% of her efforts towards her MMA career and that has shown magnificently through her unblemished record. Holm (5-0) has finished each opponent, including a perfect 2013 that has seen Holm win fights for the Legacy FC and Bellator MMA promotions. Holm will look to cap off a 2013 with a win over arguably her most experienced opponent since retiring from boxing earlier this year.

Coming to Albuquerque to play spoiler to Holm’s rise in the WMMA ranks, Colorado’s Angela Hayes (6-6) will have her opportunity to end Holm’s hype and throw her name into the spotlight. Hayes is ending a two-year hiatus from active competition and saw her most busy fight schedule in the beginning of the decade fighting three times in 2010. Hayes was part of the ill-fated women reality show that culminated with the UWC fight event in Utah, she also has notable fights against Julie Kedzie and Tonya Evinger on her resume.

While many may point to the fact Hayes has more than two times the MMA fights of Holm, the experience edge still goes to Holm as it will be in almost every scenario in her MMA career. Holm has been in more World Title fights as a Boxer than most WMMA fighters will ever have within the elite ranks of the UFC. Hayes will also have to battle the “ring-rust” factor of competition as she is an older fighter (40-years old) making a comeback to fighting after approximately 25-months off.

Holm will be in the spotlight Friday night as she headlines another event in her hometown of Albuquerque, New Mexico.

What Hayes will bring in as an advantage is a submission game which is the only question that has yet to be answered in the career of Holm. Fans, fighters and media alike understand the danger of Holm’s vaunted striking game but the question often asked when discussing Holm’s MMA talent is whether or not she can handle herself if the fight hits the mats. In WMMA today, there is a high percentage of women competitors who are grappling specialists and started their careers with Jis Jitsu backgrounds. Hayes has finished five of six career victories and four of which have been via guillotine choke.

Holm’s Head Coach Mike Winkeljohn talked about that guillotine choke during the pre-fight press conference on Wednesday afternoon. While the likelihood of Holm shooting a takedown for Hayes to attempt a guillotine is slim, the skills to end the fight via submission makes Hayes dangerous in the clinch and if the fight were to go to the ground. Should Holm score a knockdown and Hayes survive, the fight could quickly turn on Holm when Hayes has an opportunity to work the grappling game.

Holm will hold arguably every advantage outside of the submission game. While Hayes has only been finished by strikes once in her career, most WMMA competitors have never been in front of the technically flawless delivery that comes from Holm’s punches and kicks. Holm delivers leg kicks with fight altering power, body kicks with emphatic finishing power and head kicks with devastating knockout power; and those are just her leg strikes. Mix in the fact that Holm’s punches are tight, crisp and land with impact and you have a striker who you do not want to stand in front of for too long.

Training with Coach Winkeljohn and Greg Jackson at the famed Jackson-Winkeljohn gym has undoubtedly prepared Holm for all facets of MMA and having training partners like Michelle Waterson, Julie Kedzie and Tara LaRosa has to have helped Holm be ready for the MMA grappling aspect of the sport. While it is true that she has yet to be tested on the ground, Holm’s world class footwork and usage of proper striking distancing has made it a very daunting task to set up takedowns or clinch opportunities. Needless to say, Holm’s talents are of elite levels and a win over Hayes only pushes her further to the limit of taking the next step which is bypassing the regional circuit.

The match-up Friday night should be an exciting bout that could end up being a strategic chess match for Hayes and a skill exhibition for Holm. Hayes will have her best chance of winning by trying to get Holm to the mat while Holly is best suited to show-off her striking game while avoiding the grappling of Hayes. Holm has rare power for WMMA and her ability to end fights in devastating fashion is one reason why she has captured so much attention in the MMA world this year. In this pre-fight press conference, promoter and Holm’s manager Lenny Fresquez once again stated his “end-game” of Holm meeting up with UFC Champion Ronda Rousey and this fight is a big-step towards that goal.

A Holly Holm fight is always a ‘must-see” as she is New Mexico’s biggest star and arguably most accomplished combat star. We hope to see all of you fight fans on Friday night inside the Route 66 Casino for “Havoc” presented by Fresquez Productions. We will be live inside the arena to bring you live play-by-play and will have post-fight analysis for you as well.