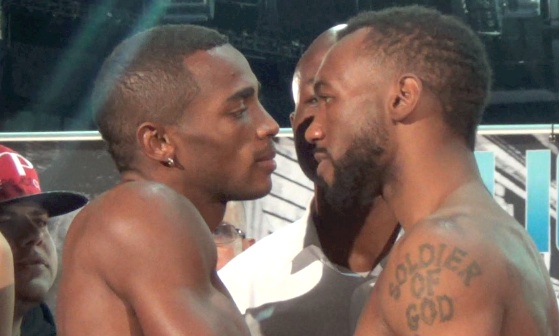 Erislandy Lara vs. Austin Trout Not As Competitive as Experts Expected

Nearly seven months of trash talking between Austin Trout and Erislandy Lara via social media was finally silenced in the ring tonight at the Barclays Center in Brooklyn, New York on Golden Boy Promotions’ Zab Judah vs. Paul Malignaggi card.

Most expected the bout to be extremely technical as neither fighter is known to be aggressive. The Barclays crowd apparently did not get the memo as they would cascade the two fighters with boos over most of the contest.

Refusing to yield to the crowds request for more action, Lara (19-1-2, 12KOs) remained composed and put on a clinic.

From the onset of the contest Lara  was able to time Trout (26-2, 14KOs) with short counter shots as the New Mexican attempted to implement his trademark lead right jab.

To the distaste of the Brooklyn crowd, most of the fight took place from the outside. Despite having a three inch arm length disadvantage it was Lara who was able to capitalize with lead jabs and strong combinations.

Trout would visibly become upset with Lara’s speed. None more then in the 11th round when a powerful straight left-hand would land flush on Trout’s chin putting him on the canvas. Trout would sit in disbelief and stare in wonder toward press row but would survive the round on very shaky legs.

It was surprising to most that Lara would not try to finish Trout in the final round instead resorting to the same tactics that got him to there.

Lara now becomes the Regular Champion of the WBA belt he was already the interim champ of. A showdown with Saul Canelo Alvarez is very likely for Lara.

After the contest Trout was taken to a local hospital to be evaluated.

King of the Cage “Driven” – Results From Ute Mountain Casino

[…] Our very own Jorge Hernandez was in New York over the weekend for the stacked boxing card featuring Paul Malinaggi vs. Zab Judah. Unfortunately for Trout, he would fall short in his attempt to capture the title. Many experts noted that Trout lost to a “better version of himself”. Here is an excerpt from Jorge’s article: […]