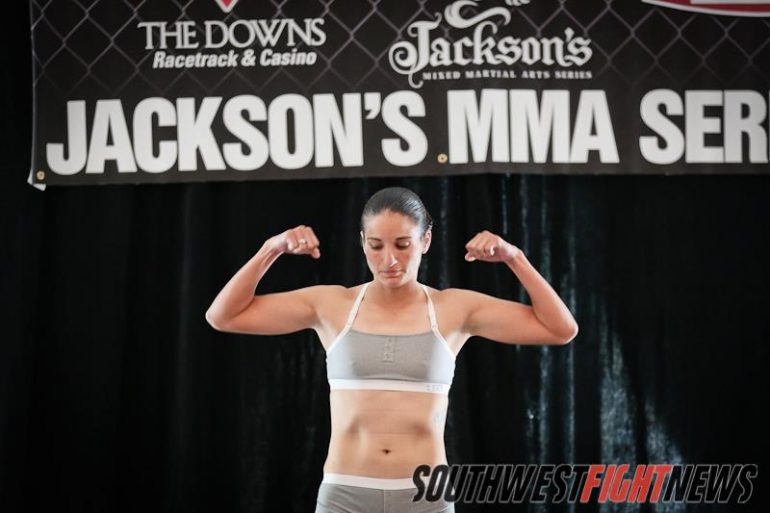 Some big news coming from El Paso today in the form of a fight announcement set for the New Year. The World Series of Fighting promotion is starting 2014 very quickly with a show on January 18th inside the Hard Rock Live at Seminole Hard Rock Hotel & Casino in Hollywood, Florida. While the main event features undefeated Justin Gaethje (10-0) and Gesias “JZ” Cavalcante fighting for the World Series of Fighting’s inaugural lightweight championship; the news coming from the Bushido MMA gym and Coach Shane Schuman is that one of his premier talents in El Paso will have the opportunity of a lifetime on the fight card.

Bushido MMA is excited to announce that Alida Gray has just signed with World Series of Fighting to fight #1 ranked Jessica Aguilar, Jan 18 in Hollywood, FL. for the WSOF Strawweight Title. The fight will be aired live on NBC so make sure to mark it on your calendars

This news brings forth one of the biggest opportunities for a local in some-time. Jessica Aguilar (16-4) is a former Bellator MMA standout who was a victim of the promotion cutting ties with the WMMA divisions. Aguilar holds a win over Invicta FC’s top 115-pounder Carla Esparza and oddly was left off the list of 11-women who will be part of the TUF 20 show to name the UFC’s first ever Strawweight Champion. Aguilar is arguably the top talent outside of the UFC and Invicta FC and has two notable victories over WMMA legend Megumi Fujii.

El Paso’s Alida Gray is somewhat of an enigma as she is only four fights into her professional career but has made a name for herself in that time period. Gray (4-0 professional, 4-1 amateur) is actually very experienced despite three years of active competition. Gray saw a knockout video go viral earlier this year when she landed one of the most brutal overhands you’ll ever see against Soannie Tiem back in October for the 24/7 Entertainment promotion. Gray has uncanny power for a Strawweight and has finished each of her 8-career victories either by submission or knockout. It is easy to see why this fast rising WMMA prospect earned her shot at Jessica Aguilar.

Gray’s Head Coach Shane Schuman is very confident in the match-up, per his Facebook:

It’s official. Alida Gray vs. Jessica Aguilar Strawweight Title fight is scheduled for January 18th at the World Series of Fighting. This event will be televised live on NBC. Jessica Aguilar is the #1 strawweight in the world so we have every intention of relieving her of that burden.

Both women have ties to the New Mexico area in their past as well; Aguilar dropped a bout back in 2009 to Team Four Corner’s fighter Angela Magana and Gray won her final amateur bout in Albuquerque against Lorna Johnson for the Jackson’s MMA Series promotion. This is a huge match-up for the Southwest as El Paso’s Bushido MMA is already rising up in the ranks of reputable gyms in the area and a win for Gray will continue to solidify that label country-wide as Aguilar represents one of the most well-known MMA gyms in the country, American Top Team.

While Gray could have been a dark-horse to fill-in one of the five remaining slots for The Ultimate Fighter 20 expected to film in mid-2014, a win over Aguilar almost thrusts her past the rankings and placement of the women expected to compete on the reality show. On behalf of Southwest Fight News, we wish Gray our best wishes in her preparations and encourage fight fans to tune in on January 18th for the fight that is expected to be part of the live broadcast on NBC. This will be the first premier fight for one our region’s own in 2014; tune into the site as we approach the event for more coverage on the highly anticipated bout.