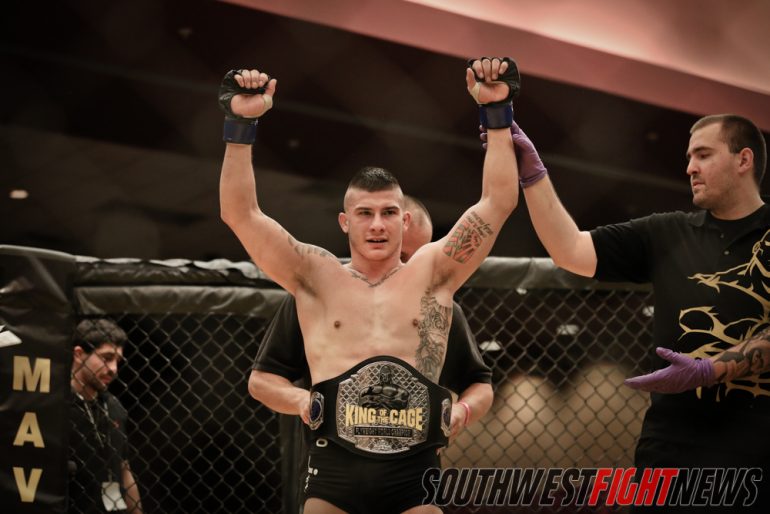 The weekend of December 7th was full of MMA action in New Mexico and Southwest Fight News had a full schedule in handling coverage. While Jorge Hernandez was in New York to cover the Boxing mega-card featuring Zab Judah and Paul Malinaggi, which was host to an undercard bout between Las Cruces trained Austin Trout, the remainder of the team stayed home to cover the Holly Holm headlined “Havoc” fight card. The crew would then make a quick turnaround, making the four-hour trip north to attend the King of the Cage “Driven” event in Towaok, Colorado inside the Ute Mountain Casino.

The “Driven” fight card is this year’s Southwest Fight News “Amateur MMA Event of the Year”.

The setting was low-key, a small casino in a small town where the promotion’s cage is smaller than most but the fighters competing had enormous heart, impressive talent and the ability to entertain everyone in attendance. It is truly a shame that these types of events are only seen live by a small, local crowd and it is some consolation that the fight cards air on delay on MavTV several weeks later.

The evening was full of action throughout, including a brawl between Ryan Wirth and Ambrose Teasaytwho Jr.

A great fight card’s true definition is up to debate depending on a fan’s perspective towards what makes MMA exciting. Some people like knockouts, some like submissions; some fans enjoy grueling tactical bouts and others all-out wars. This fight card had it all (check out our live blog). From start to finish, every fight had a moment where the crowd roared if not several of those moments. The Durango Martial Arts support crowd came out in full force, making sure their fighters had the loudest pops of the night. The fighters from the local gym won nearly every contest they competed in and were definitely amongst the notable themes of the night.

The night started out with a true slugfest between two very game Heavyweights that went deep into round three and that fight had everyone cheering and really set the tone going forward. J5 MMA’s Seth Leake made a memorable amateur debut showcasing crisp striking and devastating power to finish his fight and the next fight would follow into the theme of knockouts as Farmington’s Zack Sanchez caught three consecutive flush hooks on his opponent’s chin to get the KO finish. It was the first time the crowd in attendance erupted.

Durango Martial Art’s first fighter up to fight was Ryan Wirth and he took on Ambrose Teasaytwho Jr in the night’s first emotional bout. Wirth would come out in the first round and truly dominant; Wirth got a powerful suplex to start the round and continued on with his grappling talents as the main focus, taking the back and getting to mount on his way to arguably a 10-8 round. The fight looked as if it was just a matter of time before Wirth would lock in a fight ending submission using his powerful grappling in the second round. Teasaythwo Jr. had other plans however, fighting off multiple takedowns in the round he landed huge punches that had Wirth on his heels. It was a big-time comeback that showed the toughness and heart Teasaytwho Jr. The third round was classic as both fighters found success on the feet and on the mats, they reversed one another and it seemed like neither fighter could gain the upperhand. It was Wirth in the end of had his hand raised after 15-minutes of competitive MMA action. 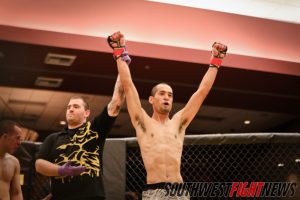 While each event has to have its winners and losers, Judgement MMA’s Jesse Sandoval earned his first career amateur victory.

Rio Rancho’s Judgement MMA had three fighters in competition that evening, all of which were cornered by Head Coach Scott Marlowe. Coach Marlowe was busy as he had his three fighters compete in a six-fight span. His first fighter Jesse Sandoval came into the evening winless at 0-3, but he showed in his bout with Mike Silva that durability and heart goes a long ways. Despite staring down his fourth consecutive loss, Sandoval worked diligently from beneath the takedown focused Silva, out-landing his opponent from the bottom position.

Sandoval would prove convincingly to all those watching and especially opponent Mike Silva, that endurance and good cardio plays a huge role in fight results. A visibly tired Silva would be unable to keep a high temp with Sandoval and the Judgement MMA fighter would pour it on late to earn the TKO stoppage in a fight he may very well may have lost had the fight hit the judge’s scorecards.

Andy Salas and Brendan Barker followed up that fight with a “doozy” of their own. Salas threw everything he had at Barker and couldn’t put him away. Barker fought back valiantly but it was the power shots of Salas that earned him the split decision victory.

Caden Rezeck hit the night’s first slick submission over Gracie Barra’s George Clynes in a fight that was back-and-forth in the first frame. The two fighters fought to get the upperhand against the other with Clynes landing from distance and Rezeck landing brutal knees in the clinch. Rezeck would open up in the second, including a slick reversal of position into the rear-naked choke. It looked as if Clynes was going to get into dominant position and with a quick sweep to the back, Rezeck got the victory.

In the lone women’s bout of the evening, FIT NHB’s Melody Nanez showed that it was going to take quite the effort to put her away in her bout with Amanda Lovato (http://www.awakeningfighters.com/athletes/amanda-lovato/). Judgement MMA’s Lovato pushed the pace for 15-minutes and while Nanez seemed to fade offensively as the fight went on, she remained game the entire time. Lovato showed an improved Jiu Jitsu game and picked up the decision win in what was her final amateur MMA bout.

The fight itself was indicative of the excitement the ladies are reputable for bringing. Lovato’s aggression met Nanez’s grittiness much to the chagrin of the crowd who applauded throughout for the two women entangled in their battle. 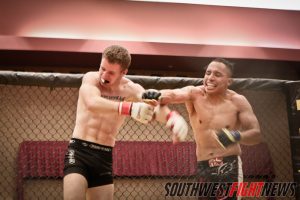 The evening was full of action ranging from close decisions, submissions and this time of knockout inducing striking.

To continue the theme of excitement, David Lyons and Matt Strawn took turns dropping each other with powerful punches. Just when you thought one fighter was getting the advantage… BOOM! The hurt fighter would drop his opponent. It was insane how each time one of the fighters ended up wobbled, how much poise they’d show in turning the tables. The fight ended with Lyons, who had just been knocked down, buckling Strawn and finishing the fight with ground and pound.

It was hard to imagine anyone beating that for “Fight of the Night” but there was more!

The final three fights lived up to the expectations that the rest of the card had set. Local fighter, Joey Trevino endured a powerful onslaught from Judgement MMA’s Ozzy Chavez and amidst some good ground and pound, found himself a triangle choke that he used to end the night for Chavez. In the main event, Durango Mixed Martial Art’s Steve Hanna won the only professional fight of the night. Hanna showed impressive grappling skills in quickly finding his way to the back of opponent Kani Correa where he’d sink in the fight ending rear-naked choke.

But the real excitement fight fans came in the evening’s co-main event, where the amateur title fight stole the show and arguably turned a great night of fights into a classic night of fights.

505 Fight Factory fighter Robert Herrera and Durango Martial Art’s fighter Kevin Wirth put on a title fight for the ages and when the King of the Cage 135-pound Amateur Title was wrapped around the waist of the winner, there was no doubt that this fight had been worthy of title accolades. The two fighters represented arguably the loudest groups of fans in the crowd making the exciting moments of this fight so loud, the venue was truly buzzing.

The first round was slow-paced but had plenty of highlights including an absolutely dominant body lock from Herrera that he used to suplex and slam Wirth on three different occasions. These slams were a sight to behold as Herrera was picking Wirth up to head-level and bringing him down with authority. In the second round, Herrera would once again earn a couple of slams but Wirth fought back with nice solid strikes standing as well as knees from the clinch. Wirth would even get to the back position before Herrera was able to reverse. 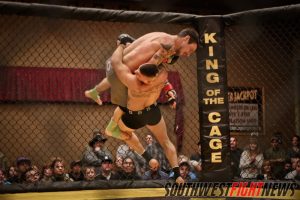 Robert Herrera unleashed a healthy dosage of huge slams and suplexes on his way to capturing the King of the Cage Title.

The fight was 2-0 Herrera headed into round three and Wirth fought perfectly just like a fighter down rounds should. Wirth succumbs to more big-time slams from Herrera to open up the round but fights to his feet on different occasions where he is winning the striking exchanges. Wirth counters a late round takedown with a kimura off his back which looked very deep and turned it into a modified armbar in a brilliant showcase of chain-grappling. While Herrera’s faced did grimace, he escaped and ended the round emphatically with yet another slam.

The fourth round was interesting to say the least. After another takedown, an adapting Wirth was once again able to get a kimura. The armlock looked deep and once again Herrera escaped but in a scramble, Herrera knee’d a downed Wirth prompting a point being taken away from Herrera by the referee. After the timeout in action, Wirth went on the offensive standing, catching an over aggressive Herrera. Wirth would reverse a takedown and get into back mount in the later part of the round, winning the round 10-8 due to the point deduction.

With that point deduction, Wirth made up some points and with a strong round could either steal the fight or push the fight to a draw. A visibly tired Herrera started to eat punches from Wirth and the Durango fighter dropped Herrera with a leg kick that brought the crowd to an insane roar. The packed house was already loud for the first four rounds and they turned it up a notch in the fifth.

What happened next, in the conclusion is best told by our own play-by-play of the bout:

Head kick blocked by Herrera and now he grabs the body lock. BIG SLAM! That’s been Hererra’s go-to move. Full guard for Wirth. Wirth reverses and gets the back but then Herrera rolls and gets back to guard. Closed guard for Wirth. Referee stand-up. Jab for Herrera. Body kick lands. Round ends with Herrera on top. Close round. 10-9 Herrera. What a GREAT fight. That was a classic for the King of the Cage and the amateur ranks.

The fight ended and the two exhausted fighters would now await the judge’s decision to know whether or not, they put enough inside the cage to be crowned champion. When the scorecards were read, Farmington’s Robert Herrera was announced the winner and while Wirth came up just short, there would be no losers inside the Ute Mountain Casino that night as everyone was witness to one of the best fights of the entire year.

That ladies and gentleman, was 2013’s amateur MMA event of the year.

Quick Results From King Of The Cage “Driven”: