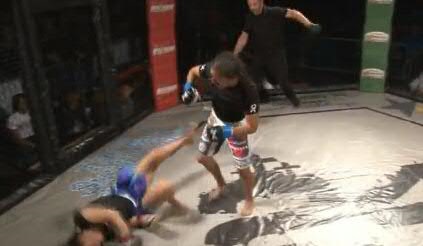 There must be a lot of anger running through El Paso based fighters. For the second consecutive year a Bushido MMA fighter wins our 2013 Mixed Martials Arts Knockout of the Year.

Last year, Bushido’s Jerry Sano walked away with the award after landing a sneaky uppercut that put George Clynes out last April in Gallup, New Mexico. This year, at 24/7 Entertainment 12 – State of Emergency event in Odessa, Texas, it would be Alida Gray who would deliver a swift shot against Soannia Tiem that would temporarily launch her into international popularity.

The women would exert a countless amount of energy grappling in the first two rounds. Toward the end of the second Gray would catch Tiem off guard after a break ordered by the referee. She would take this same tactic into the third.

Gray would begin the final stanza out of the gate, immediately attacking Tiem. In one swift motion, BOOM! An over the top sledgehammer of a right-hand à la Dan Henderson, would land flushly on Tiem’s chin, folding her entire body. Only the sound of her body hitting the floor would resonate more the than the thudding blow.

The knockout would be picked up by and ran by media outlets including AXS TV. It’s likely that this performance drew the eyes of the World Series of Fighting, the promotion whom Gray will be fighting for January 18th when she faces top world ranked Strawweight Jessica Aguilar.

Here is video of Alida Gray’s KO of the Year: