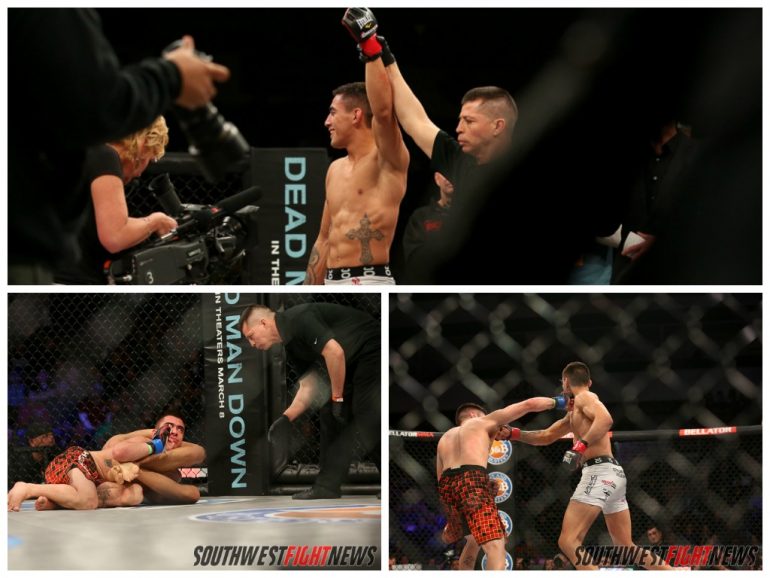 There are dozens of fights that happen every year in this area, hundreds would most likely be more accurate to describe the volume of MMA fights that are put on by various promoters in different areas within the region. With the Albuquerque area being home to much of the traffic that goes on, it is no surprise that some of the region’s best fights have happened on it’s soil. Much like our “Submission of the Year” and “Professional MMA Event of the Year“, this years “Fight of the Year” was held very early on in 2013 and all three moments for awarding happened on the very same night inside Rio Rancho’s Santa Ana Star Center.

For fight fans who made it out to Bellator 91 on February 28th, it will come as no surprise that Andres Quintana vs. Russell Wilson is this year’s “Fight of the Year”.

When it was announced that Felipe Chavez pulled from the Bellator 91 fight card due to injury, Lovato’s Total Fitness fighter Russell Wilson was in jeopardy of losing his slot on the first ever Bellator MMA show in New Mexico. Fortunately for him and in extension the fans, Lutrell’s MMA (formerly Mean 1 MMA) Andres Quintana would step up and take the fight on short notice. The fight was huge in our decision-making for our choice of “Professional MMA Event of the Year”. In fact, the fight was so amazing that we dedicated an in-depth article solely focused on the three rounds of pure intense MMA action. Here is an excerpt from that article:

We had striking, clinching, wrestling and grappling rolled into the 11-minutes of action, both fighters found success against one another and the fight ended in dramatic fashion. Quintana would finish the fight after arguably losing two rounds and he would do so in the very clinch that he found himself losing in against the talented wrestler in Wilson. We saw adversity overcome when Wilson was in the first round submission and watched him turn the tide by really digging into the tank to win round two with very technical takedowns. The bout showed the impressive talents of both fighters and while it was unfortunate one fighter had to take the loss in the epic clash, the bout was deserving of “Fight of the Night” status for the Bellator event. Quintana (4-1) propelled in popularity after the exciting fight and the intrigue to see Wilson (1-2) fight again grew tremendously throughout the regional New Mexico fight community.

The two fighters entered into the arena for Bellator 91 as lesser-known undercard fighters and left that night as local stars.

The fight could never be described accurately in words as the performances put forth inside that cage that night would be beyond remarkable; Quintana and Wilson were evenly matched so well that night that it seemed that if the fight would go five rounds (ten rounds even) that the fighters would continue to battle back-and-forth. Wilson found success in the wrestling department and Quintana would show his glimpse of technical fluidity in the striking game. (For round-to-round action, check out or live blog from February.)

It seemed as if the fighters had the answer for the other’s attacks for entire 11-minutes of action. When Quintana would land solid shots on the feet, Wilson was able to earn takedowns. When Wilson would get those takedowns, Quintana would work his way to his feet. When the two fighters scrambled, Quintana would find a submission attempt that Wilson would defend and escape and when Wilson hunted his own submission, Quintana would also find his way out of it. There were kneebars, guillotine chokes and armbars to compliment the overhands, straight rights and knees from the clinch. The fight had everything except the bright lights of Hollywood’s dramatic slow-motion shots of punches being landed squarely on each fighter’s chin. While the fight was keeping fans on the edges of their seats in the arena, Quintana showed great poise being that he was arguably losing the fight two rounds to zero headed into the third frame.

“While I was fighting I didn’t think of how intense the fight was, I felt composed the whole time. I have trained my whole life for this moment and I knew that I wasn’t going to let anyone take it from me.” – Andres Quintana

Quintana would triumph in the third round when he met an aggressive attack from Wilson with a barrage of knees that would stun Wilson en route to earning the TKO stoppage. The killer instinct in which Quintana flurried Wilson was impressive in that his relentless attack was calculated and precise. It was an opportunity that Quintana had yet to have in the previous ten minutes as Wilson would shrug off any rhythm Quintana would gather by putting him on his back with takedowns.

“I knew the fight was close and it could go either way if it went to decision so I knew I had to go out aggressive and look for the finish, which is why I rushed in when I landed that right hand which caused me to catch those knees.” – Russell Wilson

There is not a lot to say that has not been said about these two warriors other than that the people in attendance inside the Santa Ana Star Center and those watching via online stream were treated to a true classic bout between very talented fighters. The “Fight of the Year” label does little to explain the magnitude of it all as both fighters clearly left it all out there as they attempted to best one another in skilled combat. While Wilson took the loss and Quintana took the win and momentum going forward, both fighters shared some post-fight sentiments about their battle.

“I watched the fight probably 2 or 3 days later when I found it online. It was weird just seeing all the mistakes and things I could’ve done differently; I don’t really like watching my fights because I’m very critical of myself and I just see my mistakes and am not very proud of my performances, I have yet to feel as if I have fought at my best yet. I noticed a lot of things that I could’ve done differently but what stood out most was I took a lot of bad shots and I forced a lot of the takedowns which used a lot of energy, I should’ve just abandoned some shots and set up better position and I let him control where the fight took place. Most of the fight was in his corner where I could hear his coaches saying that I couldn’t take him down which caused me to be more stubborn with my takedowns.” – Russell Wilson

“It was my first Bellator win so that was a big moment for me, I’ve always wanted to compete in a big show since I was a little kid, so it felt like a dream come true and I finally made it. I had re-watched the fight that night and felt as if I had performed very well especially for taking it on short notice, even though there are always things to improve on and learn my coaches have prepared me very well for any situation. I made him work from every position and I was able to work my submission game off my back and get up at will. He was always on the defensive from one submission attempt to the next. I had a deep arm bar, knee bar, and heel hook and I believe I would’ve finished the heel hook against the cage if I had more time. My stand up was too much and that was the main reason why I felt he shot on me. I knew Russell came to fight but I truly believe that it’s my time.” – Andres Quintana

Those emotional sentiments speak volumes for the type of fighter both Quintana and Wilson are and they display the dramatic difference between a win and loss but also showcase the similarity of intense competitive drive. While Wilson talked about what could have been better being that he lost, he still was able to take a lot of positive from the loss in order to improve. He recognized his own mistakes and pinpointed things that going forward would benefit him. For Quintana, his words were full of confidence which is indicative to being the winner but also similar to Wilson in that he was able to recognize what he did in the fight. Instead of the wrong however, Quintana saw the positives and would use that going forward to continually find his niche inside the cage.

Phil’s Award Commentary: This was my favorite live fight of all time and arguably one of the top ten fights I have ever seen in the more than seven years of fighting I have engulfed myself with. Being on press row means that we aren’t supposed to cheer or show any real emotion and while that tends to be hard during big moments in most events, this was by far the hardest instance of refraining. I wanted to scream for Andres to continue with his combos, I wanted to yell when Russell escaped out of that arm-bar. I wanted to put my head down when I saw the referee step in out of sadness for Russell but I wanted to yell my head off for Andres after finishing that fight. That fight sparked my fandom from way down deep inside, the fandom I had when I first started watching MMA.

It was the first time in person that a fight made me emotional. It was that good.

While this award is for two fighters one of which had to lose, I hope it speaks to the tremendous talent level of both Andres and Russell. Andres took this fight on short notice and this would be the last time Russell fought at 145-pounds where he gave up plenty of size in that weight class. I wish there was more that could be said, but the simple truth is that on February 28th, these two fighters showed anyone watching what MMA was all about.