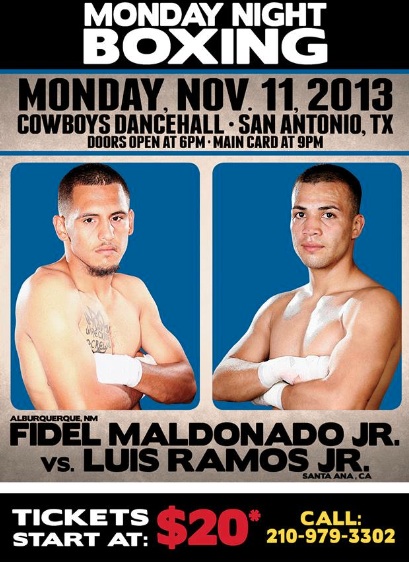 The stage is set for Fidel Maldonado Jr. and Luis Ramos Jr. to assert themselves as a true contender in the light welterweight division on tonight’s Golden Boy Promotions boxing card at Cowboys Dancehall in San Antonio, Texas.

Both men come into the contest via different journeys but have the same opportunity to make a statement on Monday’s nationally broadcasted Fox Sports 1 and FoxDeportes event.

The edge in experience undoubtedly goes to Ramos, whose record includes 12 victories over fighters with 20-plus fights on their résumé. This includes a unanimous decision win over recent lightweight title contender Raymundo Beltran. Many feel that Beltran did enough to earn the WBO crown against Ricky Burns in his last fight which was controversially declared a draw.

After dropping consecutive bouts in 2012, one being a controversial split decision loss to Michael Perez, Maldonado has rallied to win three straight; the last two via brutal TKOs, and goes into tonight’s bout 2 to 1 against the sportsbook odds.

“It motivates me to be the underdog,” says the Albuquerque native, Maldonado. “I don’t care for his experience. I feel that my chances are good. He’s a good fighter but I ain’t gonna go all that way to lose.”

The fight tonight is a rescheduled bout as Maldonado and Ramos were supposed to first face off this past June, on the Marcos Maidana vs. Josesito Lopez Showtime undercard which was held in Ramos homestate of California; a place where Ramos has had the luxury of fighting in seven of his last eight fights. Ramos was forced to pull out of the June bout for personal reasons. Tonight they meet on neutral ground in the state of Texas.

It has been nearly a year since Ramos (23-1, 10KOs), was last in action where he suffered the first loss of his career against Ricardo Williams Jr. (21-3, 11KOs). Early in the fight Ramos, received matching cuts over each eye from what appeared to be inadvertent headbutts. The contest was stopped and controversially declared a TKO for Williams.

The match-up is between the fellow Golden Boy Promotion southpaws tonight is a compelling one: Maldonado comes into the fight with more knockouts and an almost six-inch arm length advantage while Ramos has faced experience opposition and has proven to have a motor, going the distance 14 times in his career.

“This is the biggest fight of my career,” says Maldonado. “This is my toughest fight but he’s a person just like I am. I have nothing to worry about.”