What would a 125lb New Mexico Flyweight Grand Prix tournament look like?

As many fight fans already know, Southwest Fight News has worked very diligently over the last couple of years to become the premier provider for all of your combat sports news, coverage and analysis. From covering live events to visiting local gyms, the site has remained dedicated to providing the highest volume of quality content in the area. To compliment that, our partners over at the Low Blow MMA/Boxing Podcast have also consistently been bringing quality content in the form of their weekly podcast and exceptional interviews. In an effort to be more interactive with one another, SWFight and Low Blow have come together to start a new regular feature to the site.

Ladies and gentleman, this is the inaugural SWFight vs. Low Blow Face-Off.

In this segment, SWFight’s Phillip Lujan and Low Blow’s Jorge Hernandez will take a buzzing topic and debate their opinions in a roundtable format. The two will share their insight on the topic in interest to get you.. the fans on their side of the debate. So without any more hesitation, here is the Face-Off.

Phillip: I think it is very clear that three New Mexico 125-pounders stand out above the rest. Chavez Dojo’s Joby Sanchez, Jackson-Winklejohn’s Nick Urso and FIT NHB’s Ray Borg. Now I don’t know who I would select as the fourth flyweight but whoever it was they’d be a big time underdog as those three stand out above the rest, even more so then the Bantamweights in New Mexico. If I had to nominate someone it might even be theoretical, dropping down a 135-pounder down 10-pounds. As a dark horse I may even consider “The Burque Bulldog” Mikey Lovato even though injuries have kept him from action lately. Another good name is Jordan Espinosa but I am not sure if we count him as he is primarily based out of state but spends time at Lutrell’s MMA (formerly Mean 1 MMA).

I think I will go with Espinosa as he represents the new wave of MMA much like the other three Flyweights mentioned. If I was seeding them I would likely make Urso my top seed followed by Sanchez, Borg and Espinosa. This could get interesting if the tournament was a one-night spectacle as I would have to consider who is the most durable and conditioned of the bunch and honestly, not a single one of them have really been tested heavily save maybe Urso in his fight with the late Freddie Lux.

I believe the first round match-up with Urso and Espinosa would be a good one as the athletic Espinosa would really be the Cinderella-story in this one and could upset the Jackson-Winklejohn product. Urso’s striking, ability to use his range and use of knees could spell disaster for Espinosa though as well and very well could win him the fight. Urso is no slouch with his back on the mat which is where Espinosa can take the fight should he choose using his exceptional wrestling skills. Still, I think experience prevails and my bet would be on Urso taking a close three-round decision.

On the other side of the bracket, Ray Borg and Joby Sanchez arguably could be locked in as potential “Fight of the Year” type fight. The two fighters stylistically could fight anywhere inside the cage and be so evenly matched that a coin-flip could hardly do justice to the evenly matched skillsets of both fighters. I would love to see the scrambles that came out of the duo and I would feel bad for judge’s cageside who have to score the bout that undoubtedly will be fought with high-pace. I think it comes down to the wrestling of Borg which is utterly impressive and the guard game of Sanchez which is nothing short of special as well. I think the two will engage on the feet but when the final bell rings, I believe Borg will have done enough to win two of three rounds which advances him to meet Urso in the finals.

Urso versus Borg would be a barn-burner. For fans that saw Urso versus Lux, it would be that type of fight. Borg is 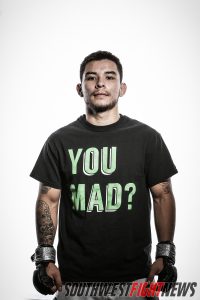 dynamic on the feet and legitimately phenomenal on the ground. Urso’s technical talent will test that explosive striking talent of Borg and with his expert use of range, Urso may force Borg to use his wrestling to get into his rhythm. I don’t know that Urso could stop every blast-double leg takedown Borg goes for and if he did, Borg’s single leg is extremely crafty as well. I don’t see a single stoppage happening in this grand prix tournament as I would pick Borg to use his wrestling/striking transitional game to earn the judge’s decision and become New Mexico’s premier Flyweight.

Jorge: The New Mexico flyweight division is quickly up-and-coming for the state. Currently, the best fighter from the state at 125lbs is easily Jackson’s-Winkeljohn’s, John Dodson. We will exclude him from the grand prix as he is already participating with the world’s top promotion. Four men based out of the state are in line to join him in the UFC; Joby Sanchez of the Chavez Dojo, Nick Urso of Jackson’s-Winklejohn’s MMA, Ray Borg of FIT NHB, and Rafael “Barata” de Freitas of Gracie Barra New Mexico.

The fixtures, I feel will be as followed with odds included:
(*Sanchez and de Freitas are teammates – we’ll keep them away from each other in the first round)

This first round match could easily be the championship. Sanchez is the only fighter in the tournament that has finished every single one of his fights but will have a difficult time doing that against Borg who had has a slight advantage on the ground because of his strong wrestling. The feisty Sanchez would eventually find his way off the ground; standing is where he can truly display his skills and I feel is where he would outpoint Borg in a three-round decision.

A very compelling battle here. Urso has a strong wrestling pedigree and ever impressing striking. De Freitas has worldclass jiu-jitsu and would have the ability to end the contest at anytime on the ground – not to mention that five of his six victories have ended in submissions. Working his way out of some holds, Urso should for the most part be able to keep the fight standing and outstrike de Freitas.

This is one match-up that has me salivating just thinking about it. Each guy has shown they are worthy of the next level.

A lifelong Kajukembo practioner, Sanchez’s kickboxing is key to this match as both men’s wrestling could have the fight

end in a standstill. Nulifying, Urso’s ground game is vital for Sanchez. If Urso, is able to gain top position it might be a difficult contest for Sanchez to take. Eventually, Sanchez I feel would find a way to match Urso in wrestling and be technical enough standing to earn him a victory.

A grueling competition in one day against multiple fighters is nothing new for him. Last year, Sanchez took XFC’s Open Tryout where over 100 other fighters in all weight classes attemtped to win a 5-fight contract with the promotion. Sanchez, excelled and was victorious. His striking skills are some of the best in the state and the improvement of his ground game with worldclass grapplers at Gracie Barra New Mexico would be a benefit.

Urso. would be sure to give him hell though. If the grand prix was stretched over a series of weeks, I’d give the edge to Urso because of systematic gameplan his coaches would be able to implement but since this grand prix would be held in an evening, the edge would to go Sanchez by narrow split-decision.

This would be one hell of grand prix.

Hot off A Marquee Win, Ray Borg Drops Back Down To 125-Pounds For This Weekend’s Bout

[…] win over former teammate Donald Sanchez at 145-pounds. The win really opened up a lot of eyes and threw Borg into a discussion as to whether or not he was New Mexico’s premier […]