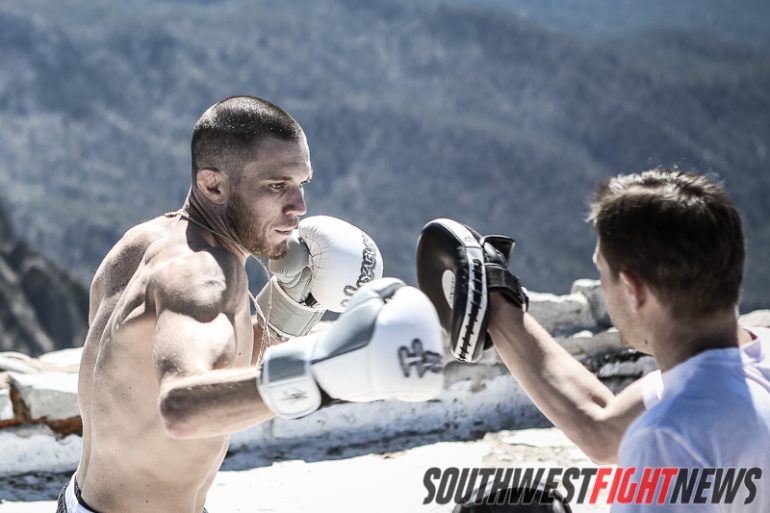 The very talented Hunter Tucker will look to get back on a winning streak and emerge as a fighter who is ready to break out of the regional circuit.

In just a few hours, the Legacy Fighting Championship will promote their 24th installment in their successful professional series of shows and showcased as part of the fight card, two recognizable New Mexico trained fighters will have their opportunity to make big statements. Legacy 24 in Dallas, Texas will be host to former World Champion boxer Holly Holm and young, talented Hunter Tucker both of which represent Albuquerque’s Jackson-Winklejohn gym.

Tucker (5-1) was on quite a hot streak heading into his last bout in April for the Legacy FC promotion. Tucker had finished five straight opponents in impressive and dominant fashion and was being discussed as possibly being the next big-time prospect emerging out of the Jackson-Winklejohn fight camp. Tucker would suffer his first professional defeat to Kevin Aguilar back at Legacy FC 19. Bouncing back for the first bout since the loss, Tucker will take on the very experienced Douglas Frey who will be fighting out of his home state of Texas.

Holly Holm will be looking for her fifth pro win and her fifth consecutive stoppage victory.

Frey has been in battles with UFC veterans Daniel Pineda and with Tucker’s teammate Erik “El Goyito” Perez; the Amarillo native has long been considered one of the toughest draws in the Texas regional circuit. It almost guaranteed that Tucker is hungry to get back in his winning ways and should bring some of the elite, technical talent with him in a content against a very game Frey.

The buzz of the fight card however is coming from the anticipation of Holly Holm’s fifth professional MMA bout. In her second bout since retiring from professional boxing, Holm (4-0) is looking to continue her tear through the MMA ranks. She has racked up four consecutive finishes most of which coming by way of her punishing kicking arsenal. She has now stopped an opponent with leg kicks, body kicks and in her last bout in July she finished Allana Jones with a highlight reel head-kick knockout. Holm’s background in kickboxing compliments her elite boxing talents making her arguably the most dangerous striker in the 135-pound women’s division.

Taking on the task of challenging Holm’s perfect record is Gracie Barra Alaska’s Nikki Knudsen who will have grappling talent to assist her in the task of slowing down the offensive onslaught that comes with fighting Holm. While Knudsen is a huge underdog in the bout, we have yet to seen Holm challenged on the ground and the grappling savvy Knudsen may be the first to take Holm down and if that happens then the fight could become very intriguing.

Legacy 24 is scheduled to be aired on AXS.TV and will begin airing the main card at 8 P.M. mountain time. Stay tuned to SWFight.com for results and post-fight analysis.