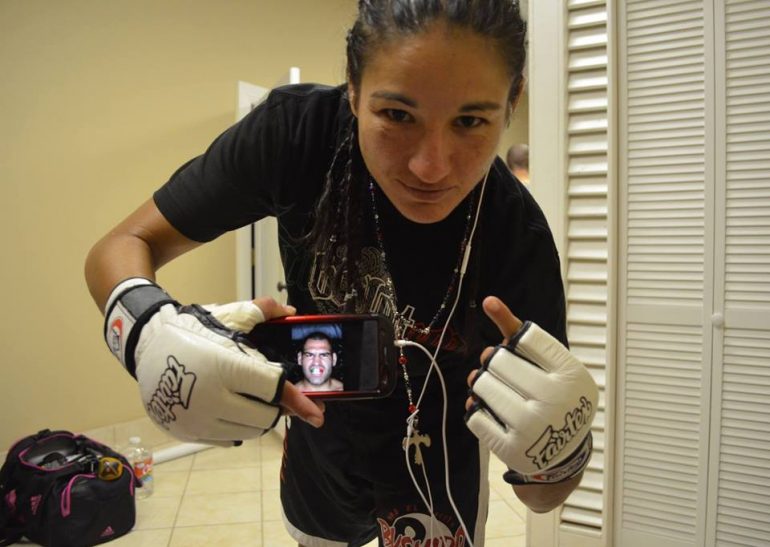 By now everyone in the combat sports world is aware of the rise in popularity of Women’s Mixed Martial Arts. New Mexico based fighters Holly Holm, Julie Kedzie, Michelle Waterson and most recently Angela Magana have headlined New Mexico cards. This weekend west Texas will follow suit when Alida Gray (2-0) becomes the first female from Bushido MMA to headline a card for the gym, in Odessa,Texas at 24/7 XII: State of Emergency.

Gray’s athletic roots start at age of 9 when her step-father introduced her to the sport of judo. That is where a young girl’s dreams would start to wander.

“I remember being in the kitchen and I told my step-dad, ‘I wanna go to the Olympics,’” recalls Gray, now 36-year-old. At that time current UFC bantamweight champion Ronda Rousey’s mother Ann Maria, was the judo world champion and was the athlete Gray most looked up to.

Gray would eventually become talented enough to be on the 1995 world team and challenge for a position on the 1996 Olympic team in Atlanta, Georgia the last Olympics held here in the United States.

“I ended up an Olympic alternate in 1996,” says Gray in a half satisfying tone. This is quite the accomplishment for anyone. Gray was ranked 5th in United States at the trials. There she would defeat the second, third and forth ranked judokas.

“In the finals, I faced off with number one ranked Marissa Pedula. She went to the Olympics and I went home,” says Gray.

After high school she would quit judo to pursue softball, earning a scholarship to Cal State-San Bernardino.

“That’s the only way I could get through schooling; with a scholarship,” she says.

For much of her childhood in North Hollywood, California, Gray’s mother raised her and her two siblings, alone, working three jobs, living in a single bedroom apartment. The family struggled but would get by with the help of an aunt and uncle that lived in the same apartment complex.

Her step-father would come into the picture when she was 8-years-old. A black belt in judo and karate, his and her mother’s work ethic would rub off on her whether it was through judo, softball and eventually mixed martial arts.

After finishing school at Cal State-San Bernardino, Gray would find herself without a job. She would move to El Paso, Texas where her family had relocated. There she says she milked it off her parents until she would receive her teaching certification from the University of Texas-El Paso. That would lead her to her current role as Physical Education teacher at Fannin Elementary in El Paso.

While teaching at the elementary school Gray, would pick up a side gig as the assistant softball coach at Andress High School. While there her judo background would help open up a position never before taken by a female in Texas high school sports history.

“I was approached by the wrestling coach who asked me to become his assistant because of my background in judo,” says Gray. “I told him I didn’t know the first thing about wrestling.”

The coach, who had been coaching for 30 years, was starting to receive requests from female students to join the wrestling team. Coaching a female is something Gray said he felt uncomfortable with and was the reason for her seeking her assistance.

Gray would learn the sport along with her female students. For six years she would serve as an assistant coach before becoming the first female head wrestling high school coach in Texas.

During her coaching Gray, was introduced to Shane Schuman, an instructor at Bushido MMA, by a mutual friend. A predominantly male school, Bushido MMA is loaded with El Paso MMA talent featuring several military veterans.

“We knew what her background was,” says Schuman. “She wanted to be an MMA fighter so we were gonna turn her into one.”

“He tells the guys, ‘Don’t treat her like a princess. You better kick her ass,’” Gray says, Schuman’s instruction were to his male fighters. “At first Shane, thought I was going to quit. He pushed me as hard as a guy. He never treated me like a girl.”

The training has been a success. Gray ended her amateur career last year with a 4-1 record, that ended with a stunning and impressive spinning back-fist knockdown to armbar submission win over Lorna Johnson at Jackson’s MMA Series IX in Albuquerque, New Mexico.

Her professional career got off to a huge start with an impressive armbar victory over thirteen fight veteran Patricia Vidonic in June. Less than two months later she would stop Jessica Armstrong-Kennett.

Tonight she has a chance to continue to rise as a legitimate strawweight prospect against Oklahoma’s Soannia Tiem (1-0).

The bout for Gray and Tiem, whether they know it or not, is not just a battle to stay undefeated but it’s a chance to continue our region’s development of Women’s Mixed Martial Arts. It is an opportunity to show their male contingent that they also deserve the spotlight as a main event.

The Next Day Perspective: Bellator 105