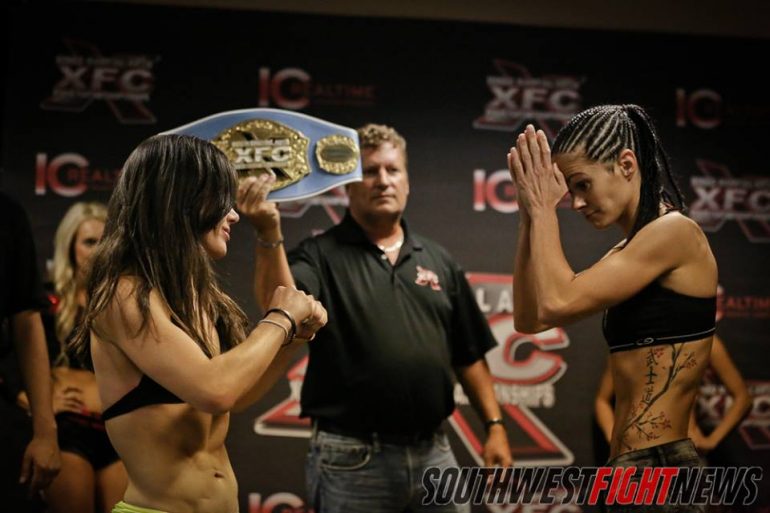 MMA has come a very long way in recent years which is best highlighted when you consider that just last year, women’s MMA wasn’t part of the sport’s most popular promotion. A year before that, it was rare to see WMMA featured outside of the regional circuits. The stigma that women are not as popular as their male counterparts will once again be tested when the women headline XFC 25 “Boiling Point” tonight inside the Albuquerque Convention Center.

Team Four Corner’s will send the accomplished Angela Magana (11-5) into MMA action, where she will be matched with Gracie Tampa’s Stephanie “Snowflake” Eggink (3-1). The two talented women will be fighting for the XFC 115-pound Strawweight Title.

For those who haven’t heard of Magana do not be surprised, she has flown beneath the radar for so long despite being one of the most successful women in MMA. She has beaten Jessica Aguilar and Barb Honchak and was extremely competitive against opponents Jessica Penne and Jessica Eye. Penne as you may recall was the Invicta FC Champion before Albuquerque’s Michelle Waterson dethroned her and Eye is now officially signed to the UFC.

Magana is very submission savvy, defeating six of eleven opponents via submission and the arm-bar has been her technique of choice in most of those bouts. A pro since 2007, Magana has never been stopped by strikes and through 16-professional bouts has never lost two straight bouts. If history should repeat itself for Magana, a loss only means a winning streak is about to follow.

Standing across the cage from Magana is Stephanie Eggink who poses several points of similarities as well as opposite focus points. Eggink is also a very skilled grappler who uses position to dominate and overwhelm opponents. Through eight professional and amateur bouts, Eggink has been awarded four judge’s decisions.

Making her fifth appearance as a professional in a little over a two year span, Eggink will find herself in the most significant bout of her career. Neither Eggink nor Magana have ever seen Championship rounds and the extra two rounds may play a huge factor favoring the more conditioned fighter. While Magana has the professional experience advantage, the title fight featured as the main event will put both women into fresh territory.

The bout itself comes with some extra curricular drama outside of the cage which makes the event’s title of “Boiling Point” really fitting in context of the featured bout. Magana and Eggink were scheduled to face off earlier this year until Magana was forced to be a late scratch due to an injury caused by a car accident. Since then, both women have exchanged verbal barbs at one another including Eggink questioning the validity of Magana’s car accident and Magana firing back with much more personal attacks. The “Boiling Point” will capsize tonight when both fighters will finally have their chance to square off.

This is definitely a must-watch for local MMA fans as the show also features locals from several of the prominent gyms in the area. Stay tuned to SWFight.com this evening for event updates and post-fight analysis. We encourage all of the fight fans in the area to make their way to the Albuquerque Convention Center for the XFC 25 event starting at 6 P.M.