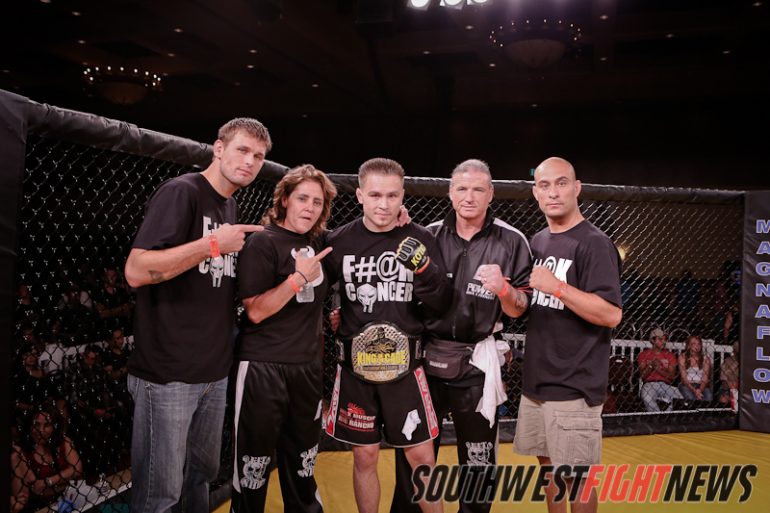 Donald Sanchez arguably is the area's best regional fighter of all-time and his run as King of the Cage Champion cements that opinion.

The Legacy FC promotion has been a stomping ground for all of the best talent in Texas and has also been welcoming to New Mexico fighters looking to make their mark in a neighboring regional circuit. Damacio Page, Leonard Garcia and Holly Holm have all participated on Legacy fight cards and now we can add Tim “The Dirty Bird” Means to the list of New Mexico based fighters who have ventured over to Texas seeking big wins.

In preparations for the main event bout featuring Means, SWFight.com looked to “The Dirty Bird’s” home gym for some insight from his teammates and coaches. We would like to thank Brenda Gonzales for helping in the quote collection process and also to all of FIT NHB for graciously giving up their time.

As fight fans know, Tim Means is one of the most vicious finishers in the sport today and has unleashed brutal strikes on his opponents for several years. While his opponents definitely know how hard he hits; a forgotten aspect of combat training is that his teammates feel his talent based wrath on a much more common basis than his opponents.

FIT NHB Fighter’s And Coaches On Training With Means:

“Good and bad experience. First time I’ve ever been KO’d with a body shot in practice. “Dirty”.” – Nate Baker

“Tim Means sucks, has no power. LOL JK. He almost embarrassed me by making me soil myself in training with a body shot!” – Ray Borg

“Training with Timmy is a good experience. He’s a good fighter, he gives alot of different looks when we train. He is overwhelming, and gives body shots that will drop you to your knees.” – Tyler East

Spoken from the mouths of the training partners of Means and each quote combined then paints the picture of just how devastating the striking arsenal of Means truly is. From the smaller weight guys like Borg and Baker to the heavyweight East; the sparring isn’t enjoyable but imaginably very beneficial. It is evident through the feelings of the fight team that the body work of Means is clearly setting him apart. While the words from the male competitors tell a story of the destructive power Means possesses, the women of FIT NHB chip in on more insight into the fight camp of “The Dirty Bird”  which includes a gem from Means’ own fiancé who herself is a very talented mixed martial artist.

“It’s cool getting to punch your fiancé in the face and not get in trouble for it! 🙂 JK! Love being on the same team, learning from each other, and pushing each other! The gym keeps us together!!” – Brenda Gonzales

The home gym of Means is downtown Albuquerque’s FIT NHB (Fighter’s In Training, No Holds Barred) which is headed by the Vaughn’s, Tom and Arlene who are both in their own right two very acclaimed coaches. The words from both of the head coaches speaks volume for the talent and relationship they have with Means. Tom has spent time with some very high profile fighters including Ryan Bader while Arlene has worked with such notables as Seth Baczynski; needless to say there opinions on fighters should hold marginal weight in the MMA community. Means has spent his career fighting for the Vaughn’s inside the FIT NHB gym.

“Coaching Tim Means is the reason I became a coach. It’s like scripting your best movie and landing the ideal actor to play the part.” – Coach Tom Vaughn

Stay tuned fight fans for more event coverage and Tim Means coverage as we draw near to this Friday’s main event bout featuring Tim Means and UFC veteran Pete Spratt fighting in a welterweight bout. Join us in sending him the support of the local MMA community as he looks to bring a win back to New Mexico at the end of the week.