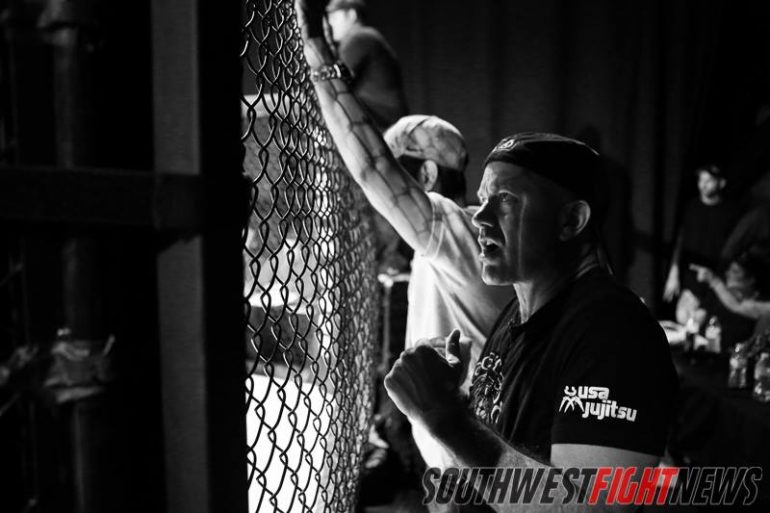 King of the Cage “Future Legends 18” is all about featuring the amateur MMA fighters competing under the promotional banner. There are intricate steps that fighters make during their early career paths that will lead them to the professional level. One of those steps is feature bouts as amateurs, which really promotes the fighter as nearly being ready for that transition. Next weekend at The Crowne Plaza Hotel, the King of the Cage fight card will promote a few of these types of fights. It is very easy to predict that October 5th will be a very significant night for several amateur fighters.

Three of those fighters will be coming out of Rio Rancho’s Judgement MMA & Fitness where Head Coach Scott Marlowe has prepared his fighters for bouts that have huge implications as to where their careers go after next Saturday’s event. 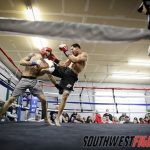 The hard hitting Rozema knows that his power makes all the difference in his MMA bouts.

Marlowe’s step-son John Rozema (3-1) will enter into the cage against Mike Aguilar (1-0) in a 145-pound Featherweight bout. Rozema started his amateur career earlier this year and has really stood out in the four bouts he’s competed in. Rozema has garnered the reputation of being a heavy handed striker whose intention is to end the fight as soon as the fight starts. The very skilled striker has ended each of his three victories by utilizing that fight ending power he possesses in both hands.

Rozema’s one flaw thus far in his short amateur career is that his striking acumen is so strong that fighters are looking to ground him and turn the fight grappling based. In his lone amateur defeat, Rozema was beaten on the ground where he was unable to gain advantageous position and eventually succumbed to a submission. This bout will be very telling as to whether Rozema went back and fine-tuned his ground skills in preparations for Aguilar who has very good skills in the wrestling department. Rozema’s progress and improvement in this bout will speak volume as to where he goes post-bout as he is expected to turn professional after this fight.

Another member of the Judgement MMA team looking to make an emphatic mark on an amateur career is Amanda Lovato (2-1). Lovato represents part of the wave our area has of talented women mixed martial artists. After a year of amateur MMA bouts and kickboxing/boxing smokers, it has been discussed that Lovato may in fact be making the move to the professional level with an impressive showing. 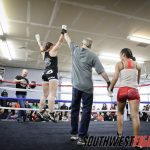 Will Lovato continue her rise up the ranks? Her hand being raised is becoming typical for the Judgement fighter.

With talents strengthened by aggression and an unrelenting pace, Lovato is a very dangerous striker who alike her teammate Rozema is working to add a solid grappling game to her talent set. In two career amateur victories, Lovato’s pressure and overwhelming volume striking has earned her two TKO victories. Still very young, Lovato has shown immense progress in a year’s span indicating that the progress will lead soon to the promotion to the pros.

Rounding out the amateurs from Judgement MMA is Jerome Rivera (2-0) and the 18-year old from Santa Fe may be one of the most exciting fighters to watch out for on Saturday night. The Josh Montoya protégé has shown that his ground game is not to be overlooked and that his talents this early in his career is to be respected. While two wins may scream premature hype, a fan has to look deeper to see that Rivera’s skillset if very advanced for his age and career level.

Rivera’s striking has looked solid when his fights have seen stayed standing but it has been his creative grappling that has secured his success. Not only can Rivera work the takedown and win from top position but he has also shown his ability to work from his back and still find success. The young flyweight will take on the most experienced fighter on the fight card and should Rivera find success once again, we may not have to wait long to see him hit the professional circuit.

Stay tuned to SWFight.com for more event coverage, bout breakdowns and analysis. Join us in sending our support to the Judgement MMA team as well as the rest of the competitors participating in “Future Legends 18”.