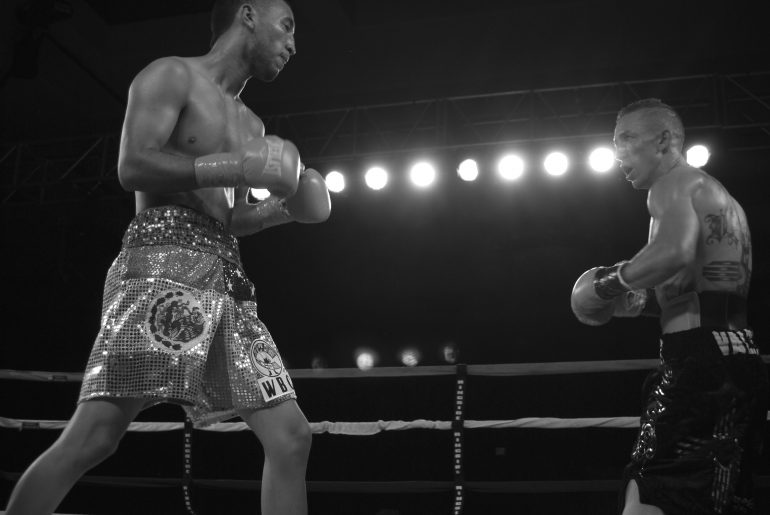 A raucous packed ballroom of about 1,200 were on hand to witness what could be the boxing card of the year, Saturday at the Buffalo Thunder Resort and Casino. The evening’s main event saw Espanola’s Tony Valdez great game plan early on abandoned in the final round against San Antonio, Texas‘ Felipe Castaneda in their WBC US Super Flyweight championship match. 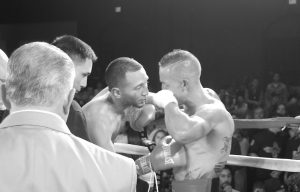 (Check out our highlights from the fight)

In the first three rounds Valdez‘ game plan was evident as he would tactically and beautifully land combinations and move away from Castaneda’s range. The only times Castaneda would land was with counter shots delivered when Valdez stayed in the pocked too long.

It was a cat and mouse game up until the fourth when Valdez would tire, dropping his hands to his waist. Despite the fatigue in his opponent Castaneda, remained patient not attacking but instead waiting to counter the slower combinations coming from Valdez.

Going into the final round it was clear that Valdez was up by at least three rounds. All he had to do was box his way to the WBC US title but the style he used to build that lead was forgone. His approach to trade shots with Castaneda proved to be a big mistake.

With just two minutes remaining Castaneda would unleash a rampage that would send Valdez stumbling around the ring and look to desperately clinch the Texan. After what seemed like a prolong clinch referee Rocky Burke finally managed to untangle the men.

The two fighters would then engage in a fight ending exchange. Castaneda fought for a championship while Valdez fought to stay in a fight that was his. The more powerful and meaningful shots clearly came from the visiting fighter while Valdez flailed erroneous punches, the punishment taken by the hometown fighter was enough for Burke to stop the fight.

Immediately both corners charged the ring, Valdez’ team in protest and Castaneda’s in pure elation and celebration of the incredible comeback.

“We thought the stoppage was a big premature,” said Valdez’s trainer Pat Holmes Sr. “We were winning the fight easy and Tony decided to trade punches. That’s why you don’t play with your food.”

Ringside SWFight.com had the contest 69-64 in favor of Valdez going into the final round.

“I felt like I was losing. Every round he came out strong,” said Castaneda post-fight. “I felt the crowd too, yelling. I thought if these guys don’t stop [cheering] I’m not gonna win this fight but thank God, he gave me the last round. I hurt him.”

“This was an eight round fight not seven. Any round can change the fight,” said an elated Castaneda.

Holmes Hammers Salinas in the Second

In the co-main event of the evening Brandon Holmes Jr. knocked out Daniel Salinas in the second round. A very patient Holmes was seen in the first round waiting to counter Salinas.

The busier Salinas took the first but it was the second where his aggression would lead to his downfall. While against the ropes parallel to press row, Holmes would unleash a brutal left hook, right hook combination to stun Salinas and finish with another flush left hook. 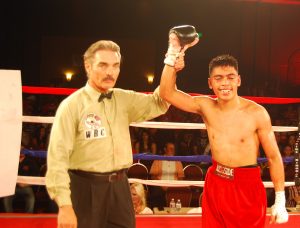 A very impressive Angelo Leo (3-0) got a chance to showcase his technical skill against veteran Brian Garcia (7-21, 2 KOs). The contest was a one-sided affair. Garcia’s flatfooted bullish style allowed Leo to box from the outside and sidestep the vet anytime he tried to impose his weight and strength against the ropes.

Leo appeared to control every since round but only one referee disagreed with everyone else ruling the contest a draw. Thank goodness the other two judges were not asleep at the post awarding Leo a well deserved 40-36 decision.

In what most thought would be a stern test for debuter Patrick Holmes Jr. (1-0), his opponent Brandon Salazar (1-2, 1KO) weathered an early storm to stop him in the third.

The fight commenced with feeding off of his hometown crowd. Both men came out in extremely wide stances. It was Holmes that was effective early on getting past Salazar guard and Muay Thai-like stance with punches right up the middle.

After being staggered by a right cross and holding compose himself, Holmes would counter a Salazar combination with a huge one-time right cross that floored Salazar.

As the fight when on into the third and eventual last round, the fighters disregarded protecting themselves. Salazar would attack Holmes in a neutral corner landing a huge five punch combination where we would almost pry his mouthpiece loose. During the onslaught Holmes would turn himself sideways and forcing the referee to jump in and stop the contest.

Debatable Draw in Fight of the Year Candidate

The opening bout of the night between Matthew Baca and Antonio Martinez was the best of the evening and in a dry boxing year it is Fight of the Year Candidate that immediately jumps in to the top five.

Baca controlled the contest early on with a tactical body attack but Martinez built momentum in the third and made a fourth round competitive.

One judge scored the contest 39-37 in favor of Baca. SWFight scored the bout 39-38 for Baca. It is possible that Martinez squeezed out the 4th round to force a draw but for a judge to rule the fight in favor of Martinez is highly questionable.

Check out our breakdown of it and all the other fights at http://swfight.com/2013/09/06/holmes-boxings-new-mexico-pride-and-glory-play-by-play/