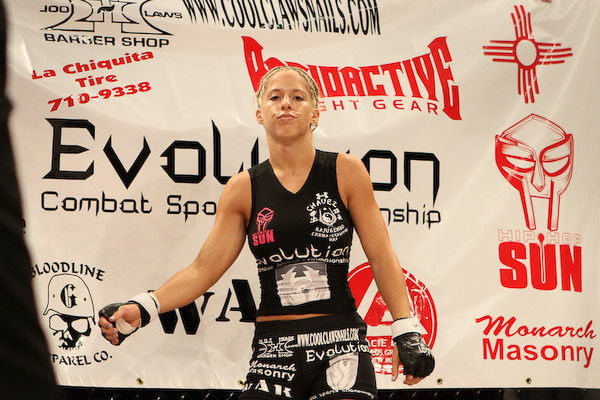 The fans of MMA in New Mexico know that our region is full of talented women fighters who are continually making a name for themselves in promotions across the country. From promotions like Invicta FC based in Kansas City to Texas based Legacy FC; women are finally getting their shine after the men have been the focal point of MMA for over a decade. The XFC promotion is also doing their part in the expansion of WMMA and their show next week here in Albuquerque is a perfect example of their efforts.

In the XFC’s debut show in New Mexico, the headlining act will be a WMMA Title Fight featuring the companies Champion Stephanie Eggink and Team Four Corner’s fighter Angela Magana. However, before that main event bout fight fans will be treated to a feature bout between the South Valley’s Angelica Chavez (4-2) and Stephanie Skinner (2-4).

Chavez is one of the most popular combat athletes in Albuquerque and arguably the state as well. The 26-year old Atomweight is a four year veteran of the sport and will return to her hometown to fight after a brief stint fighting for Invicta FC. Training out of the Chavez Dojo, Chavez is a very efficient kickboxer who has powerful leg kicks and precise punches.

While training at the Chavez Dojo, Chavez also has a prolific Jiu Jitsu specialist to pick up skills from. Rafael “Barata” de Freitas is a World Champion Jiu Jitsu Ace and joins Chavez and fellow XFC fighter Joby Sanchez in training in the South Valley gym. It comes as little surprise that Chavez can win fights on the feet and then finish opponents on the ground. In all four of her career victories, Chavez has defeated her opponent via submission.

Wyoming’s Stephanie Skinner has some history with Chavez even before they enter into the cage this upcoming Friday night. Skinner’s Serial Boxe teammate Diana Rael handed Chavez her first career defeat back in 2011 in a bout that was featured inside Albuquerque’s famous venue “The Pit”. Skinner is nicknamed “The Scrapper” and her reputation for brawling as each of her six fights have been exciting fights which only one has seen a Judge’s scorecard.

The aggressive nature of the Serial Boxe fighters will be met with anticipation this time around for Chavez. In the bout with Rael, she was clearly thrown off of her rhythm by Rael’s pressure and pace. Chavez is a calculated and measured fighter which makes her match up with Skinner a style mismatch.

Can Chavez bring her fans the win in her hometown with her solid striking acumen and savvy grappling chops? Or can Skinner play spoiler and take home a win over the beloved Chavez with her aggressive and smothering style of fighting?

Stay tuned to SWFight.com for more event coverage, fight breakdowns and analysis. Make sure to clear your schedules out for September 6th to spend a Friday night watching some exciting and high level MMA action.