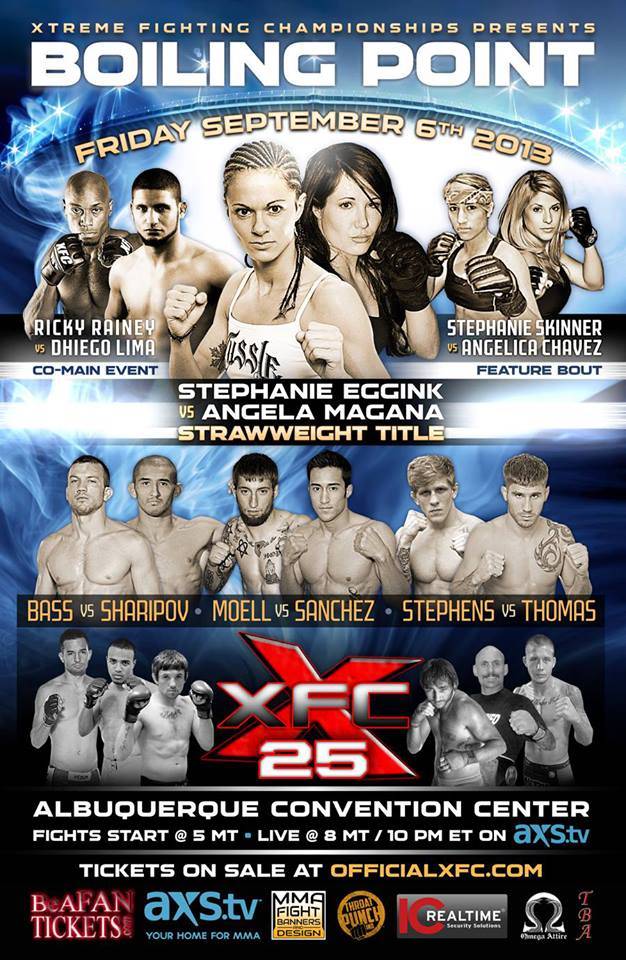 The Xtreme Fighting Championships (XFC) is coming to New Mexico for the very first time and the East Coast promotion is making their debut in spectacular fashion with a fight card full of intriguing match ups, title fights and contender bouts as well as featuring several of our areas most talented fighters. The XFC 25 “Boiling Point” event is scheduled for September 6th inside Albuquerque’s Downtown Convention Center.

Headlining the event is a WMMA Title Fight featuring XFC’s top Strawweight Stephanie Eggink facing off with New Mexico’s own Angela Magana. Representing Team Four Corners, Magana is one of the most proven commodities in WMMA despite flying under the radar for much of her career. She will have the opportunity to add another quality name to her resume and capture promotional gold in the same night. Eggink and Magana also have some bad blood spewing over from verbal exchanges after their originally scheduled bout at XFC 23 fell through.

The XFC 25 main card is made up of several explosive match ups that will shake up the XFC Welterweight Division. There will be two 170-pound bouts on the main card featuring a fight between Dhiego Lima and Ricky Rainey and another between Ian Stephens and Ryan Thomas.

The talk of the main card however buzzes around two fighters from Albuquerque’s South Valley. It wasn’t long ago that Joby Sanchez went out to the XFC open try-outs in Florida and came home with an XFC contract and he will square off in the second fight of that contract against Eric Moell. There is a solid storyline in this bout as Sanchez recently defeated a teammate of Moell. Sanchez is considered to be one of the premier blue chip prospects in the area and his participation in the event comes with heavy anticipation.

When we discuss anticipation, we need to include one of the area’s most popular fighters. Chavez Dojo’s and Joby Sanchez teammate, Angelica Chavez will return to fight in New Mexico after a brief stint in Invicta FC to take on Stephanie Skinner in an Atomweight Division fight. Chavez is a very dynamic fighter both on the feet and on the mat; her fight with Skinner should be a fun one full of action regardless of where the fight takes place.

Jackson-Winklejohn’s Landon Vannata will also be in action fighting in the Lightweight Division in what is being labeled as XFC’s TV Swingbout. Should time permit, this bout may join the duo from Chavez Dojo as being featured on the live telecast. Teammate Tommy Truex was also expected to participate on the fight card but unfortunately is under medical suspension by the Athletic Comission.

Santa Fe’s Joshua Montoya is slated for MMA action as well against Edward Tomaselli. The match up features old school versus new as Tomaselli hasn’t fought since 2009 and Montoya is only 22-years old. The Alchemy BJJ fighter is true veteran of MMA despite his age having fought all over the U.S. since his pro debut four years ago.

Maybe the most interesting match up for fans of local MMA comes in the first scheduled fight on the card. FIT NHB’s Tim Sosa is making his professional debut and his first opponent will be Jordan Espinosa who spends time training over at the Mean 1 MMA in Rio Rancho.

Stay tuned for more event coverage, fight breakdowns and analysis as we continue to get closer to the September 6th event. Keep an eye out for interviews and ticket giveaways as well and as always we encourage the local MMA fans to show their support to the hard-working athletes.