Why We’re so Hype for Tonight’s Sano vs. Tenneson Amateur Fight at Jackson’s MMA Series 11 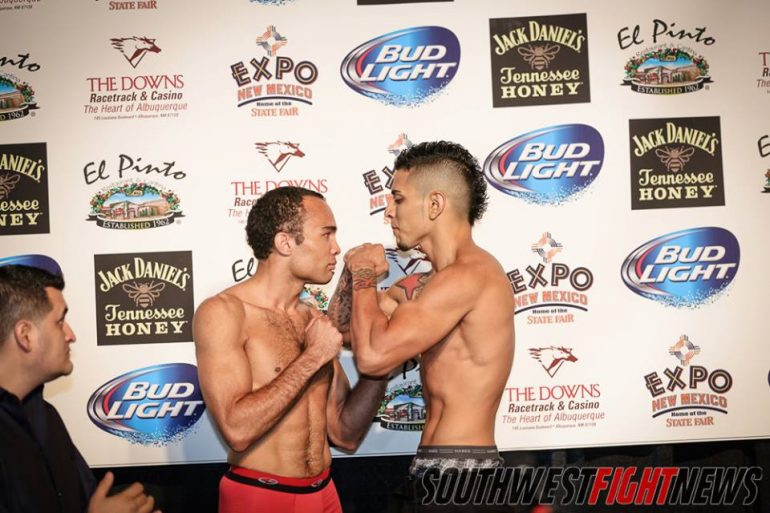 It will be the cobra versus the mongoose tonight on Jackson’s MMA Series 11’s featured amateur fight inside the Tingley Coliseum when Andrew Tenneson faces Jerry Sano.

We are not going to lie, as soon it was announced that this fight would be part of the Jackson’s MMA Series 11 card the entire SWFight.com staff became giddier than middle-school chicks at a Justin Bieber concert. That is because we know the talent Sano and Tenneson possess and not to mention they come from two of the most talented gyms from their respective areas.

Tenneson has drawn a lot of praise from his trainers including Jackson-Winkeljohn striking coach Mike Winkeljohn and is currently on an undefeated amateur campaign. Sano hails from El Paso’s Bushido MMA gym where he is trained by Shane Schuman and gym owner and professional fighter Hugo Sida. Sano is coming off a year layoff since his last contest in August 2012. Most of the layoff can be blamed on a motorcycle accident that hospitalized him and put him out of training for quite sometime.

If styles make match-ups then those in attendance might want to prepare themselves for one hell of a battle.

Sano’s continuous pressure and onslaught attacks in the stand up lead many think his punches are wild but the truth is he keeps his power punches tight and his chin tucked in like any intelligent fighter. With that same power Sano was able to knockout

Coincidentally, one of Clynes’ cornermen that evening was none other then Tenneson. Tonight, Tenneson will be looking to avenge his teammate’s loss and is looking to narrow the record margin between Bushido MMA and Jackson’s. Currently, Bushido is one of the few gyms in the world that holds a positive record against Jackson’s MMA,  boasting a three win to one loss record.

Tenneson is a self-proclaimed anime geek but do not let the glasses and his disciplined demeanor fool you. Since picking up

taekwon do, jiu jitsu and mixed martial arts in college he has been a sponge with every art he has practiced – think Mortal Kombat’s Shang Tsung, the character that had the ability to absorb his opponents skills.

Very technically sound Tenneson has the ability to finish fighters standing up or on the ground. He has never been in a match where a judges decision was rendered finishing all four of his opponents by submission or KO.

No matter the outcome of this contest both men are sure to show that they can be successful at the next level.