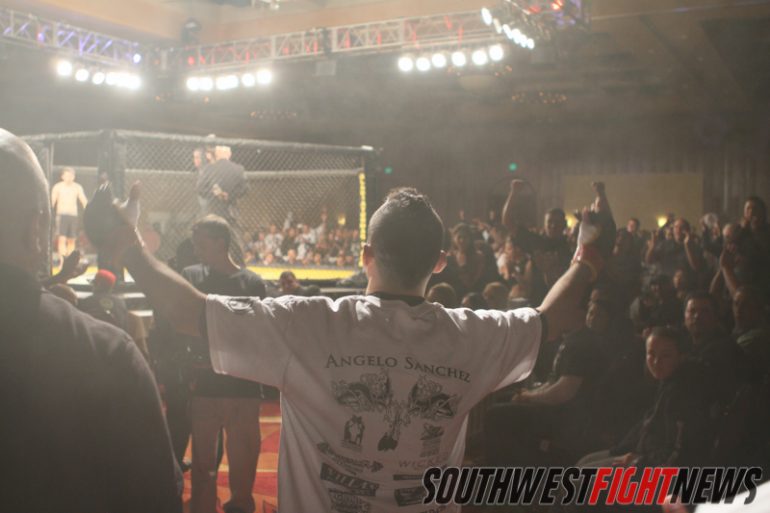 This Sunday inside the Crowne Plaza Hotel Ballroom, Triple-A-MMA promotions will hold their second event in New Mexico. The August 18th event is titled “North vs. South” and features a bout between Angelo Sanchez and Ray Borg. Identical to their first event, the show features the gimmick of “Win To Get In” which has implications of the winners in the professional bouts earning a shot to fight for Bellator MMA. Inaugural winners Felipe Chavez, Richard Jacques and Javier Palacios all just recently competed at Bellator 97 in Rio Rancho.

This second show’s matchmaking was made very similar to the promotion’s first event in that the card is entirely made up of fights between in-state fighters fighting one another. Most shows tend to bring in non-local talent to face the home town fighters and this show has strayed from that in their first two shows.

The show’s featured amateur bout will pair Judgement MMA’s hard hitting John Rozema and Lovato Total Fitness fighter Jesse Long in a 145-pound Featherweight bout. Rozema started his amateur career this year and has shown in each bout that he is heavy handed and his striking precision spells disaster for fighters who step into his range. Long hasn’t recorded a bout since 2011 but he does hold notable victories over Paul Ray and Rozema teammate Adrian Cruz during their amateur careers.

Also scheduled for the card is Long’s teammate Steven Cervantes. Many who attended the first Triple-A-MMA show will remember Cervantes for his intense duel with Falon Ring back in April. In that bout, Cervantes was willing to engage Ring in every avenue of MMA as he won the striking exchanges, took Ring down several times and worked both offensively as well as defensively on the mat. Cervantes would hand Ring his first amateur loss, stopping him in the second round after landing a very powerful head kick.

He will take on Judgement MMA’s Ozzy Chavez in a 135-pound Bantamweight bout. The bout will be the second featuring Judgement MMA vs. Lovato Total Fitness fighters matching up and Chavez will go against the Judgement MMA typical pedigree as he also has a solid wrestling background. Add in Coach Scott Marlowe’s striking acumen and we may have ourselves the early pick for “Fight of the Night”.

The youth movement will be well represented in the event as Judgement MMA/Alchemy BJJ’s Jerome Rivera will step into the cage for the second time despite being only 18-years old. Rivera fought previously for the King of the Cage promotion and made his debut emphatically successful with a rear-naked choke stoppage in the first round. He will take on Albuquerque BJJ’s Bruce Lee Romero in a 130-pound Catchweight bout.

Albuquerque Kickboxing’s Jacob Espana also fought on the most recent King of the Cage event in Albuquerque and did so in impressive fashion. Espana finished a very slick kimura from top position and will look to add to his success in 2013 when he faces off with a very tough opponent in Levi Lucero from the Perez Fighting System gym.

Rio Rancho’s Mean 1 MMA won’t have fighters in the headlining acts like they did in Triple-A-MMA’s first event but they will send two talented fighters into the cage for amateur duels. Jiu Jitsu specialist Mateo Sanchez will take on Independent fighter Garry Taylor in the 145-pound Featherweight division and Max Spiller is paired against Santa Fe BJJ’s Steven Gonzales. Spiller fought on the inaugural fight card and needed a little over a dozen seconds to pick up the victory. Spiller’s fast and powerful hands will be contrasted by Gonzales who is a King of the Cage veteran with very technical grappling and powerful ground striking.

Rounding out the amateur card is Albuquerque BJJ fighter Dorian Dixon facing off with AJ Garza of Lovato Total Fitness. Dixon as an amateur is full of experience, fighting for the Jackson’s MMA Series as well as King of the Cage. The very technical striker will have a handful with the solid striking and powerful wrestling of Garza and that fight should be a good one to start the event off with.
The amateur card has shaped up to be one of quality and of very interesting match ups. Both Lovato Total Fitness and Judgement MMA will have three amateurs fighting while Mean 1 MMA and Albuquerque BJJ send two. Stay tuned to SWFight.com for more event coverage, fight breakdowns and analysis. We encourage fight fans to clear the afternoon on Sunday and make the trip down to the Crowne Plaza Hotel for MMA action!