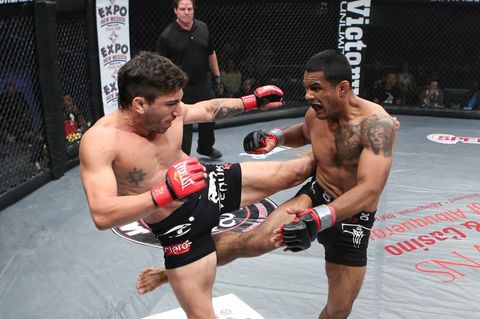 The year’s first Jackson’s MMA Series concluded on Saturday night and depending on an individual’s perspective the event was full of success, heartbreak, excitement and intrigue. The action packed card delivered decisions, submissions and knockouts while also providing upsets and triumph alike.

Heading into the event, much of the buzz surrounding the eleventh installment of the Series was the Latin American movement coming to the Jackson-Winklejohn gym in Albuquerque, New Mexico. Several of the best fighters from Mexico and Argentina based their training camp headquarters inside the famed MMA gym and four of those fighters were featured on the main card.

The results were mixed as the four Latin American fighters went 2-2 on the night making for some exciting moments. Here are a few thoughts about the Jackson’s MMA Series a few days later in reflection.

• Gabriel “Moggly” Benitez was supposed to be the budding star in the Latin American movement and was quickly defeated by Team Roswell’s Richard Villa. After opening up the round very quickly and efficiently, Benitez threw Villa to his back and was quickly tangled in a heel hook. Villa really cranked hard on it and those cageside mentioned hearing a pop or crunch possibly coming from the knee of Benitez.

• This isn’t the first big win for Villa who upset Drew Fickett back in 2008 and very nearly prevented UFC Featherweight Diego Brandao from leaving the regional scene in 2010. After the upset win, Villa got on the microphone to tell UFC matchmaker Sean Shelby (who was in attendance) that he wanted his shot in the big show. I don’t know that Villa will get that chance yet but this win definitely makes his name known to Shelby should he get another quality win or two.

• “El Cazador” Daniel Salas also was bit by the upset bug on Saturday night. After starting the dismantling process over opponent Jason Brenton, he was caught quickly by a straight right hand that folded him to the canvas. Salas was impressively offensive and aggressive early on but was caught by a powerful right hand.

• The two Latin American products that did snatch victory did so impressively. Guido Cannetti had a fun fight with Eliazar Rodriguez that saw some striking, some clinching and some ground work. The powerful Cannetti used his strong striking skills to dominate on the feet and showed his strength in true form when he lifted Rodriguez in the air to escape a submission attempt and then slammed him back down to the mat. Cannetti would secure a fight ending rear-naked choke soon after.

• Augusto “Dodger” Montaño didn’t need a whole lot of time to show why so many respect the Mexican native’s powerful striking. Montaño unloaded a barrage of punches on his way to his feet after a slip and opponent Jason Clayton was overwhelmed by the knees and uppercuts coming his way. Montaño continued his onslaught landing dozens of punches to the ground Clayton until Clayton finally submitted to strikes.

• The stoppage in that fight should be a concern for the Athletic Commission going forward as referee Raul Porrata allowed too many strikes to a defenseless Clayton. If not for Clayton’s tapping to Montaño’s strikes, it didn’t look as if Porrata was going to stop the bout. A referee should intervene should the fight be in a place where the fighter absorbing punches is in no way able to escape the position. First and foremost our referees should have fighter safety first and this lapse by Porrata could have been a dangerous one.

• In that same breathe, referee Joe Coca did the exact opposite of his peer Porrata. In the bout between Nick Urso and Ronnie White, Coca halted the bout very early after White took a knee from Urso that sent him to the mat. While the strike may have landed clean, it was very obvious that White was defending well and was not rocked. While flash knockouts are frequent, sitting cageside it was apparent that White was still fighting back and ready to continue after the stoppage.

• The Jackson-Winklejohn representative Nick Urso came into that bout touted as one of the state’s premier prospects and he engaged in a brawl with Ronnie White that saw both fighters throw absolute bombs at one another. The two Flyweights threw technique out the window during their flurries as they both stood in front of each other and tried to know the other out. While Urso came out with the victory, the bout could have turned out to be an epic one if not for the premature stoppage.

• White took the fight on very short notice filling in as the third replacement for Urso. He fought valiantly in defeat and really attempted to chest Urso’s chin. White is a tough fighter who has an impressive opponent list as he has stepped into the cage with Joby Sanchez, Jordan Espinosa, Felipe Chavez and now Urso.

• Amidst all that drama and excitement, the hometown headliner Conrad Padilla fought a very tough Apex MMA fighter in Nick Rhoads. Apex MMA has a very reputable track record at the Jackson’s Series and in continued as Rhoads won a unanimous decision. Both fighters showed their toughness, endurance, durability and heart as neither quit for 15-minutes while taking the best shots from one another.

• The amateur card was highlighted by an exiting duel between the host gym’s Andrew Tenneson and Bushido MMA’s Jerry Sano. Bushido MMA is another gym with a successful track record against the Jackson’s camp. Tenneson bested Sano in the second round with a slick arm-in guillotine after dominating the wrestling aspect of the fight with several big takedowns.

• The Dodson’s have power running through their blood apparently as Eric Dodson; younger brother of the UFC’s John Dodson has now stopped two of three amateur opponents. Eric Dodson made quick work of Thomas Mills as he launched punches from close range dropping Mills to the mat where he would ground and pound his way to victory. While it is far too soon to compare the brothers in their MMA careers, the talent is apparent for the younger Eric and he shows flashes of the same explosiveness, power and speed that John does in his fights.

In conclusion, the event was a solid one and fight fans should look forward to the twelfth event. The series has really seemed to make a home out of Tingley Coliseum and due to the fact the arena is built in stadium format; even the most inexpensive seats are quality seats. Stay tuned fight fans for more local combat sports news, coverage and analysis and join us in continuing our support of the hard-working fighters who competed over the weekend.