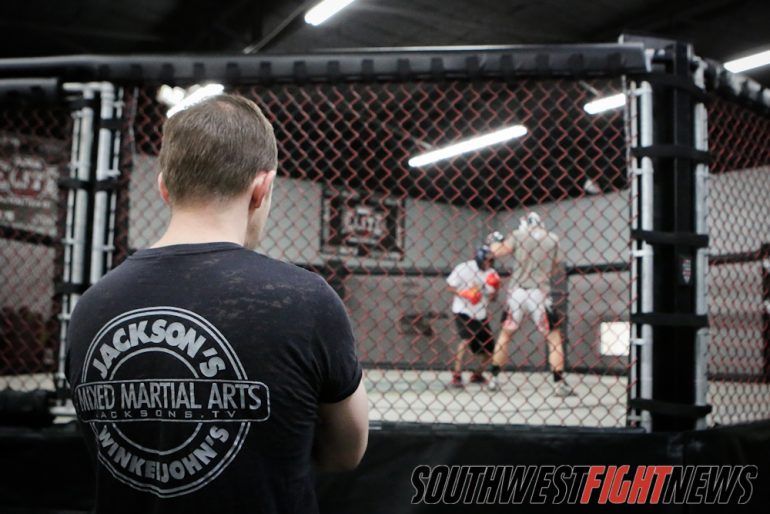 Now eight months into the year, we have not had one of the states most popular promotions hosting a MMA event. The Jackson’s MMA Series is considered to be one of the “heavyweight” promotions popular in New Mexico and its absence from the 2013 has been felt by fight fans throughout the state. All that is about to change tonight as the Jackson’s MMA Series XI event hits Albuquerque’s Tingley Coliseum at 5:00 P.M.

This will mark the 11th installment of the popular show and to commemorate that milestone SWFight.com took the time to compile a list of the ten best moments from the first ten shows. It was a tough process as the events typically produce several epic moments in each fight card but these were just ten of which stood out as mentionable moments from the first ten events.

On June 5th, 2010 the very first show was held inside the Hard Rock Casino. The inaugural event was stacked from top to bottom with quality talent and notable figures in the MMA scene. The first official bout was between Mean 1 MMA’s Tim Dennison and Colorado’s Bruce Reis in a fight that ended via triangle choke early in the second round. Later on Nick Urso, Hunter Tucker and Matt Leyva would all secure wins and would stick around to become main stays on the Albuquerque based event.

Also on the card, current and recently signed UFC fighter Julie Kedzie fought in a grueling three round fight where she would earn a unanimous decision nod over Malissa Sherwood. It wouldn’t be the only Woman’s MMA fight on the card as the evening was capped off with a fight between Jennifer Moran and Natasha Greger. The inaugural event would be a quality one and would leave an impression that would continue to grow positively as the show has now become a staple of regional New Mexico MMA.

The highly successful and ultra talented Tucker has taken the MMA scene around New Mexico by storm as the 145-pound featherweight fighter is still unbeaten in his professional career. In a career retrospect, the Jackson’s MMA Series II was the end of one chapter and the opening of another for the Jackson-Winklejohn product.

In what would be the final fight of Tucker’s amateur career, a first round rear naked choke would cap off a perfect 4-0 amateur career. Opponent Bryce Case wouldn’t have much of a chance to mount any sort of offense as Tucker was too much, too fast and dominated in his usual fashion en route to the submission stoppage. This would only be a taste as to what was coming for Tucker and his performances inside the Jackson’s MMA Series cage.

8. An upset highlights the night and propels Bedford into the Ultimate Fighter – Jackson’s MMA Series III

It was the beginning of the transition of fighters merging from the World Extreme Cagefighting (WEC) promotion into the Ultimate Fighting Championships (UFC) and several fighters were left out of the loop looking to pave their way into the sports largest stage. Unfortunately, Jackson-Winklejohn fighter Frank Gomez was not part of the immediate transition and signed up to main event the Jackson’s MMA Series III against Texas native Johnny Bedford.

Bedford would establish very early that he would not be the stepping stone into the UFC for Gomez as he would stun the Albuquerque trained fighter quickly and end up taking back control in a scramble. Bedford would lock in a fight ending rear naked choke 94-seconds into the fight and with the impressive win would secure a spot on the first ever season of The Ultimate Fighter to feature 135-pound bantamweights.

7. Brandao wins in a brawl, Villa nearly pulls off the upset

Diego Brandao was being groomed to make his entrance into the UFC but someone forgot to tell that to his opponent Richard Villa. From the touch of gloves, Villa immediately took to the role of the aggressor as he swarmed Brandao and nearly dropped his as he back pedaled towards the fence. While it looked like Villa had Brandao hurt, the Brazilian fighter recovered quickly and started mounting his own offense. Brandao attacked with crisp combinations while Villa whipped powerful hooks and head kicks. The fight would eventually hit the mat after a huge slam from Brandao and even though Brandao’s Jiu Jitsu Black Belt was marginally beyond Villa’s grappling accomplishments, Villa survived and even threatened to reverse positions on several occasions.

In the second round, Villa once again swarmed in looking to overwhelm the Jackson-Winklejohn fighter. The highlight of the round for Villa came when Brandao attempted a huge slam and Villa was able to land on his feet. Villa would look to dominate position but the accomplished and gifted grappler in Brandao would take over with a few scrambles that led him to the back mount. With a body triangle locked in, Brandao secured a fight ending rear-naked choke. The fight was one of pure excitement and had the crowd roaring in anticipation for what was going to happen next.

Brandao would join the UFC ranks soon after and Villa would become a mainstay and fan favorite in regional events but both will always be linked together for having one of the more entertaining bouts of the Jackson’s MMA Series.

6. Vallie-Flagg stops Rodriguez, leaves regional scene behind – JMMAS 4
Riding the heat from two straight finishes, the crowd in the Hard Rock Casino was ready to blow the lid off the arena in excitement. Teammates Rocky Ramirez and Jodie Esquibel had both impressively stopped their opponents and the Jackson-Winklejohn trained Isaac Vallie-Flagg was up next facing off with opponent Danny Rodriguez. Vallie-Flagg was a winner of seven of his last eight fights and was surging up the list of names to be considered ready for the next level.
Midway through the second round, Vallie-Flagg cemented that status as a crushing knee to the body crumbled Rodriguez and the following punches forced the referee stoppage. The impressive win propelled Vallie-Flagg towards bigger promotions and his next fight would take place under the Strikeforce banner.

After a tough few fights at Villasenor’s usual weight class of 185-pounds, “Smokin’ Joe” looked for some career resurgence by cutting the 15-pounds to become a welterweight. In his first fight at the new weight class, Villasenor would draw Iowa’s Chuck Parmelee in the main event of the Jackson’s MMA Series VI.

About two minutes into the first frame, Villasenor caught an aggressive Parmelee charging in landing a short hook. The punch stunned Parmelee and allowed Villasenor to find the opening he needed to swarm. With his opportunity, Villasenor took full advantage as his barrage of strikes forced a referee stoppage awarding him the technical knockout victory and jump starting his career in a new weight class.

Between marriage and giving birth to her first child, Michelle Waterson had everything BUT mixed martial arts on her mind after an April victory in 2010. Waterson had long been considered one of the premier talents in WMMA and was on the path towards stardom amongst the women ranks. During her layoff, the landscape of WMMA had changed and in January of 2012 Waterson showed she still had it going on.

Waterson returned to action against “Dynamite” Diana Rael who fight fans of regional New Mexico recognized as the women who bested Angelica Chavez at the MMA Fight Pit. Rael is a scrappy atomweight fighter who proved to be a tough out for all of her former opponents. Waterson would waste no time with Rael, sweeping her opponent off of her back and securing a fight ending rear-naked choke just minutes into the first round.

Back in active competition, Waterson would propel from her win over Rael and capture the most prestigious Woman’s Atomweight Title this past year for the Invicta FC promotion.

On the undercard of the Jackson’s MMA Series IX held inside the Tingley Coliseum, the amateurs brought the excitement in bundles as four of the fights lasted on average just over a minute long.

Robbie Gutierrez stopped Adam Knowles with strikes in just 22-seconds in the shortest bout of the evening and Ricky Esquibel had the quickest submission of the night when he guillotine choked Chris Brewer in 44-seconds. Eric Dodson, brother of John Dodson spent 80-seconds in an edge-of-of-your-seat throwdown with Fernie Garcia before a fight ending counter strike halted the bout.

Nick Gonzales spent a little longer then his three counterparts as his bout with Gene Perez went a lengthy 109-seconds. The two fighters engaged frequently in the sub-two minute bout, before Gonzales took advantage of the fight hitting the ground where he would snatch an arm-bar finish. The four bouts were just highlights of an event that saw ten finishes in eleven fights.

The main event of the Jackson’s MMA Series IX was billed as Mikey “The Burque Bulldog” Lovato out of Lovato Total Fitness versus Frank Gomez out of Jackson’s MMA. It was one of the most anticipated fights featuring two local competitors in quite some time and the buzz surrounding the event was solid in the weeks building up to the event. However, with a week to go until fight time, Lovato would suffer a knee injury that forced him off the card and with under seven days to find a replacement to the main event the promotion scrambled with their damage control.

In Lovato’s place, relatively unknown Aaron Cerda of Texas stepped in to fill the slot as co-headliner alongside Gomez. The bout was fun in the opening minutes as the powerful Gomez looked to impose his well on the smaller Cerda. After a strong takedown from Gomez, Cerda would stay active from his back landing an elbow to the attacking Gomez that landed near the eye.

Confusion took over the arena as the fight ended with many in attendance believing Gomez had earned a stoppage. The reality was that the fight was stopped when the cut and damage the elbow caused the ringside physician to put a halt to the bout. It would later be announced that Gomez suffered an injury to that eye that caused him to lose vision in that eye temporarily. The win would mark the most significant for Cerda and would be a considerable set back for Gomez.

In the co-main event of the tenth installment of the Jackson’s MMA Series, Conrad Padilla ended a lengthy layoff to face off with Rolando Cespedes. Padilla had long been known as a tough nosed fighter and returned to action picking up the unanimous decision after three rounds of action.

The bout did not come without adversity however as Padilla was nearly put in danger of being finished twice during the bout. In the first round, Cespedes landed a solid spinning back-fist that visibly stunned Padilla but he would recover and end the round strong. In the second frame, Cespedes once again landed flush but this time it was a looping left hand that dropped Padilla to the mat. Cespedes would rush in looking for a TKO and transitioned into a rear-naked choke attempt that Padilla impressively fought off. Padilla would survive once again and would dominate the third round to earn the judge’s decision.

Utilizing effective dirty boxing and kickboxing throughout the bout, Padilla showed a well-rounded skill set to remain unbeaten in his professional career. The win would eventually land Padilla the main event slot in the upcoming Jackson’s MMA Series card.

With the ten mentioned moments and the countless others that have happened in the first ten shows, SWFight.com is in heavy anticipation of what the eleventh show will bring. SWFight.com is your place for all of the JMMAS coverage, fight breakdowns and analysis. Clear the evening for some MMA action tonight inside Tingley Coliseum to catch some of the area’s premier MMA talent.

Jackson’s MMA Series XI: A Night Of Fights That Is Much More Than Meets The Eye