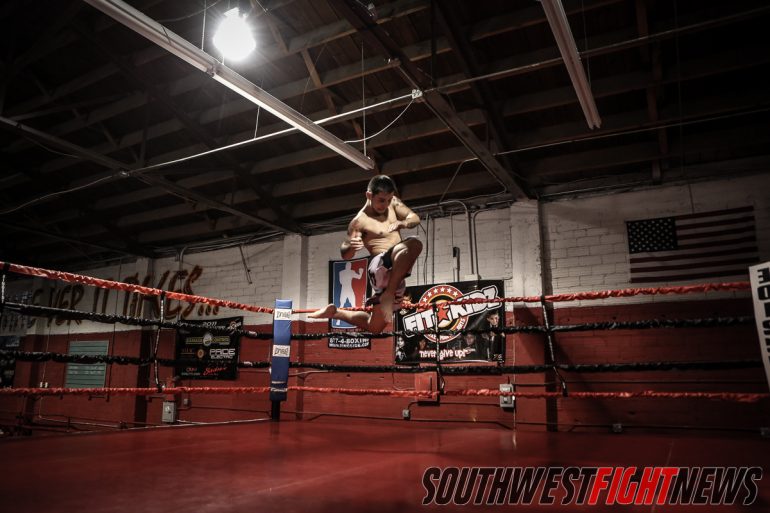 A victory against Sanchez, Borg feels would be his chance to be recognized as a legitimate force in the regions bantamweight division.

“Putting him away will really show people that I’m legit and that I’m here to make a mark on the sport,” says the Borg.

As if an 4 and 0 undefeated amateur campaign and 3 and 0 professional career isn’t enough to prove otherwise.

The success as a mixed martial artist can be attributed to the competitive hardships Borg saw as a wrestler in his youth. In his first year of junior high school Borg says his record consisted of one win and twenty-seven losses – I still can’t tell if he was joking.

“Maybe that’s why I’m so good at jiu jitsu because I’m ok being on my back,” jokes the recently turned 20-year-old Borg. Wrestling was a sport engraved early in his childhood. Borg’s father and uncle were very good wrestlers and his cousin Andrew Peña was a two-time state champion at Cobre High School in Baynard, New Mexico at 110-pounds.

“I had to learn how to make sacrifices for the sport at a young age,” says Borg who has been grappling since the age of 12.

He would go on to attend eastern New Mexico’s San Jon High School which did not have wrestling as part of its sports curriculum. MMA and grappling would eventually become his sports of choice.

While participating in grappling tournaments Borg would meet two talented New Mexican MMA fighters, Donald Sanchez and Gerald Lovato of FIT NHB in Albuquerque, New Mexico. Borg asked Sanchez to assist him in getting into the gym as a professional fighter. Two years ago, once his high school years were over Borg would join the gym.

Sunday will be the biggest opportunity in his young career to showcase the skills he has acquired over the years, especially what he has developed at FIT NHB.

In Angelo Sanchez (12-3), Borg will face arguably one of the best native New Mexican talents. Sanchez is a former King of the Cage Bantamweight champion and has not suffered a loss in MMA since losing a close split decision to rival -coincidentally Borg’s teammate – Donald Sanchez in May of 2010.

“Just because I haven’t fought for a really long time like Angelo, doesn’t mean I haven’t invested a lot into the sport,” says The TazMexican Devil, who earned his nickname over the years due to his sometimes unorthodox style of attack and defense.

It has been 19 months since Sanchez last stepped into the cage. Injuries prevented him from participating in the first Bellator MMA event in New Mexico this past February.

Before a string of unfortunate injuries Sanchez had put together four straight wins via submissions. During his activity Borg has sky rocketed up the local rankings winning five consecutive fights including four of them via submission.

This fight is likely going to be won on the ground as the both men love submissions. If you take a close look at each fighter’s records it has all the makings a war. All of Borg’s fights, amateur and pro, have ended in the first round while only two of Sanchez’ fights have ever even gone the distance.

Triple A MMA’s “North vs. South- Win To Get In” is set to take place at the Crowne Plaza Hotel in Albuquerque, New Mexico.