You know there is going to be a fight when Richard Villa (7-5) enters the Jackson’s MMA Series cage. Fans who follow the Mexican regional scene know Gabriel “Moggly” Benitez (14-3) more often than not finishes the fights he starts. Those two facts can lead many to believe that when the two come together in the co-main event of the Jackson’s MMA Series XI (JMMAS) this Saturday, we could probably pencil in the fight as “Fight of the Night”.

Benitez represents the Latin American/Hispanic movement which is calling the Jackson-Winklejohn gym their stronghold. Alongside fellow JMMAS XI participants Guido Cannetti, Daniel Salas and Augusto Montano; Benitez is one of the more successful regional fighters from the Mexican fighting scene. Many New Mexico fight fans will recognize Villa from his two fights for the JMMAS and his successful résumé fighting in our area’s regional circuit. 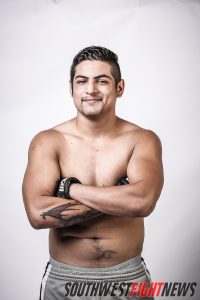 change all of that. Benitez is a precision striker with a Muay Thai base. Despite his strong striking background, he holds eight wins out of fourteen coming way of submission. Adding in his five TKO’s and Benitez has a 93% finishing rate making him one of the fighters to keep an eye out for Saturday night.

Representing Team Roswell, Villa has been in the cage with some absolute terrors from our area’s regional circuit. He holds wins over UFC veteran Drew Fickett and Jackson-Winklejohn representative Rocky Ramirez and has been in some competitive fights with UFC vets Diego Brandao and Alberto Crane. Most recently he fought Bellator MMA’s Jeremy Kimball. Needless to say, Villa holds impressive experience and will be ready for the area’s toughest fighters.

Benitez is slick on the stand-up where he encompasses the very essence of the Muay Thai discipline utilizing standing elbows, brutal leg kicks and his signature strike, the flying knee. Benitez clinches well and delivers knees from inside clinch range making him very difficult to strike with as he is dangerous from the inside and outside of striking ranges. To add to that lethal arsenal of strikes, Benitez has really shown that if an opponent is knocked down or decides to try and grapple, that they are equally playing with fire. Benitez has burned opponents with a submission ranging from armbar to guillotine and rear-naked choke to kimura.

The Tijuana native has an opportunity to shine this Saturday as the co-main event fighter but his opposition knows a thing or two about spoiling the party. Villa defeated the host gym fighter Rocky Ramirez back in mid-2012 with a keylock submission. He also derailed a comeback bid by Drew Fickett years prior with an early second round TKO finish. Maybe most memorable however was Villa’s all out brawl with Diego Brandao before Brandao’s emergence as a top UFC Featherweight.

Back at the Jackson’s MMA Series III event, Villa would engage in striking flurries and grappling scrambles. Evading Brandao’s high powered offense and inflicting his own damage, Villa and Brandao went to war for nearly nine minutes in what is one of the most memorable fights from the ten JMMAS events. Villa started the round clipping and dropping Brandao to the mat.

This fight has excitement written all over it and as it was mentioned before, could very well be the “Fight of the Night” for Saturday’s event. Stay tuned to SWFight.com for more event coverage, fight breakdowns and analysis. Make sure to get out to Tingley Coliseum Saturday night for the Jackson’s MMA Series XI to support all of the hometown and locally trained athletes.

Tickets can be purchased at the following link http://holdmyticket.com/event/134891 .