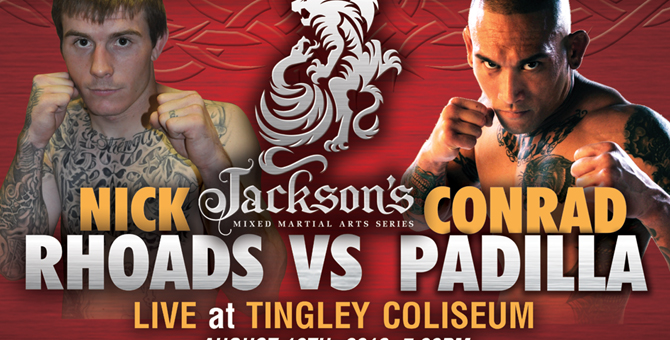 The Jackson’s MMA Series is reputable for a handful of reasons and remains one of the most successful and long lasting regional promotions in New Mexico’s combat history. One of those reasons is that the series always hosts several amateur fights that serve as “proving grounds” for amateur fighters to build their way up towards professional careers. Sometimes amateurs have short runs on that level and immediately make the switch and others stay patient with no rushed intent to take that next step.

The Jackson’s MMA Series XI event is no exception to this as the fight card is stacked with more then a handful of amateur match ups featuring some very raw amateurs and some experienced ones as well.

Expected to be one of the event’s first bouts, Jackson-Winklejohn trained Eric Griego (0-0) will make his MMA debut against Robert Fratterelli (1-2). Fratterelli will make the trip from Pacific Warrior Pueblo, Colorado and will hold a sizeable experience advantage competing in his Colorado regional circuit.

One of the most interesting fighters on the undercard is Jackson-Winklejohn’s Vincent Varela (0-0). While he will join teammate Griego in making his MMA debut, the background of Varela should make him a fighter to put firmly on your radar. Varela was a standout wrestler for Rio Rancho High School posting a 56-0 record as a Senior and winning the 2007 New Mexico High School Athlete of the Year Award. He was considered the 18th-ranked wrestler in the country heading into recruiting.

Varela would wrestle for both ASU and Hofstra where he’d continue on with that successful pedigree he captured in High School. In his Junior Year of college, Varela posted an impressive 20-13 record while placing sixth in the Pac-10 Championships. He would add to his success as a Senior, posting a 21-15 record and receiving an “at-large” bid to the NCAA Championships. It is easy to see that he brings with him a strong combat related background and working in the Jackson-Winklejohn camp can only add to that prestige.

His opponent in the 145-pound Featherweight bout is Damage Inc.’s Ray Vaiza (0-1) will certainly put Varela’s toughness to the test. The Socorro based fighter is hungry to bounce back from a tough loss and represents a multitude of challenges for Varela to handle. Not only can Vaiza test Varela’s striking, he can also attack with Jiu Jitsu. While Vaiza can’t compare wrestling chops to Varela, his skills in other disciplines will play out to be the key component to whether Vaiza or Varela get their hand raised at the end of the bout.

104.1 The Edge is concluding their second “Challenge” event that focuses around bringing athletes with minimal training experience together to formulate fight teams. The teams were coached by UFC fighters John Dodson and Isaac Vallie-Flagg and the premise of the challenge is determined by the coaches putting their fighters to the test over the course of several weeks where one stand-out from each team will meet inside the Jackson’s MMA Series cage to determine the winner.

The Edge FC finalists will be competing in the 155-pound Lightweight Division and feature Henry Barahona competing against David Binder. It is always interesting to watch debut fighters and the added intrigue here is that they were prepared and coached by successful UFC fighters.

Speaking of UFC Fighters and the 125-Pound Flyweight Top Contender John Dodson; Eric Dodson (2-0) will return to the JMMAS looking to 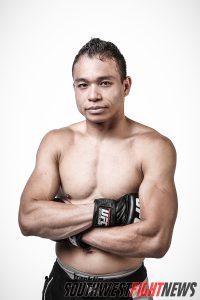 keep his perfect record intact. The fan favorite Dodson brings with him an exciting style that has earned him the fandom of the JMMAS crowds in both of his fights in 2012. The Jackson-Winklejohn representative wowed the crowd back in September in his 80-second fight with Fernie Garcia and in this go-round; he will have another tough opponent looking to defeat him.Fighting out of the Perez Fighting System’s gym, Thomas Mills (2-1) will have the opportunity to steal the hype from Dodson and throw his name into the discussion of being one of the area’s top amateurs. The Perez fight camp is well known for producing very tough fighters who are tough draws for opponents in that they are hard to put away and will throw everything to put their opponent’s away.

These opening fights have an immense amount of potential excitement looming around them. This is not the kind of event where you’d want to come late just to see the main fights, traditionally the JMMAS has provided some of the most exciting fights for those in attendance in the opening bouts. Stay tuned to SWFight.com for more event coverage, fight breakdowns and analysis. We look forward to seeing all of the fight fans at Tingley Coliseum this Saturday, August 10th to cheer on your local, hard-working MMA fighters.

Tickets can be purchased at the following link http://holdmyticket.com/event/134891 .