The Mexican promotion XFL (Xtreme Fighter’s Latino) has been home to essentially each and every up and coming Latino fighter competing in that areas regional scene. This Saturday’s Jackson’s MMA Series XI event will feature a five fight XFL veteran in 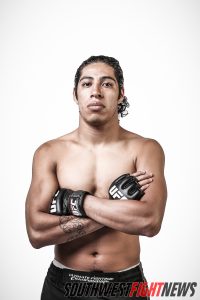 Ending a 17-month layoff, Salas will enter into the cage Saturday night representing the Jackson/Winklejohn camp and will be one of the featured fighters on the main card. Salas has never won a bout that he didn’t finish with strikes or a submission and since 2007; his only defeats have come by way of judge’s decision. That should be an indication that opponent Jason Brenton has a tough job ahead of him.

“The Showstopper” Jason Brenton represents the 8th Street Gym in Grand Junction, Colorado and will be in Albuquerque looking to play spoiler to Salas. Brenton has spent most of his career fighting for the BCP (Bush Cree Promotion) organization and has shown himself to be exactly what his nickname suggests; Brenton has stopped six opponents with strikes either in the first round or early in the second round.

Formerly of the Galvan Combat Systems fight team, Salas is immensely exciting despite being most impressively a creative defensive specialist. Salas has a lengthy body and utilizes a stance that makes him even lankier. Salas checks just about every kick that comes his way and has both effective head movement and active footwork. Salas is confusing to figure out on the feet and very aggressive on the ground; splitting twelve wins between five TKO’s and seven submissions.

Coming off two wins to right the ship of two consecutive losses, Brenton represents a style of fighting that contrasts the game of Salas almost perfectly. Brenton is a very straight puncher that often makes him longer then he really is and creates problems for fighters with wide stances. He throws hard and crisp, creating an overwhelming flurry of strikes that are delivered with fight ending power. He is offensive minded in comparison to the defense savvy of Salas.

Salas will hold a marginal grappling advantage in the match up if their records are any indication of the fighter’s talents. The most telling loss in Brenton’s career is his submission loss late in the first round in late-2012. In that fight, Brenton was winning in the stand up until he was put on the mat and submitted. Salas has shown his bread and butter to be grappling efficiency; taking the back mount or locking up triangle chokes seem to be where Salas finds himself comfortable.

This fight has loads of variables and that adds intrigue to the match-up. Stay tuned to SWFight.com for more event coverage, fight breakdowns and analysis. The event is set go down on August 10th at Tingley Coliseum and we encourage all of the local fight fans to make their way out to the show. The Jackson’s MMA Series historically over ten events has always delivered fight cards full of exciting bouts.