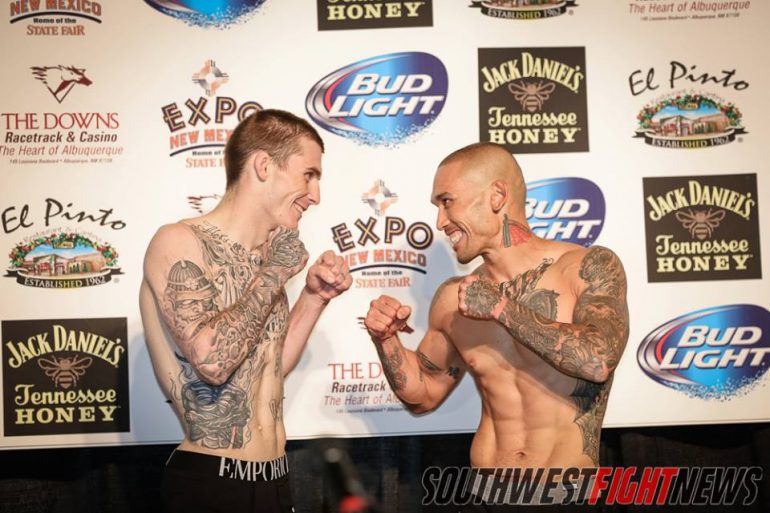 Tonight, August 10th there will be two fighters who will have their opportunity to truly shine as the featured main eventers for the Jackson’s MMA Series XI event. Inside the Tingley Coliseum within the Expo New Mexico State Fairgrounds, Jackson-Winklejohn’s Conrad Padilla (4-0) will face off with APEX MMA’s Nick Rhoads (5-2) in what is arguably the biggest fight of both fighters’ careers.

Serving as the main event for the eleventh installment of the popular Jackson’s MMA Series, the talents of Padilla and Rhoads serves as the headline and the premier bout for an event that is full of intrigue, potential excitement and interesting storylines.

This fight amounts to be a huge step up for both fighters. While Padilla has been a mainstay on the Jackson’s MMA Series and Rhoads has been featured by Arizona’s top notch promotion World Fighter Federation, the pair will be getting the chance to compete as the featured bout for a promotion that is front and center as one the top regional shows the UFC and main MMA companies keeps tabs on. 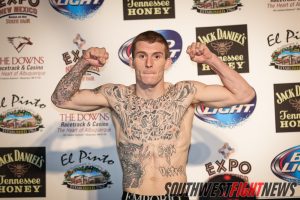 Rhoads represents a gym in Apex MMA that comes with respectable reputation amongst the regional scene here in New Mexico. The Arizona gym has found loads of success against some of New Mexico’s premier regional talent. Rhoads comes equipped with quick, sweeping leg kicks and precision striking that wears down opponents to the point where Apex MMA fighters are known to kick their aggression to top gear hunting for finishes. With an 80% finishing rate himself, Rhoads tends to work the ground game until he makes his way to the back mount utilizing powerful ground and pound until he can sink in his patented rear-naked choke.

Bringing the championship pedigree into the cage from the Jackson-Winklejohn camp, Padilla exemplifies all the characteristics of star waiting to emerge. Padilla is undefeated, possesses loads of experience and contains a lot of talent. While he is young in his professional career at four fights, Padilla has been competing in active mixed martial arts competition since 2009 where he fought for the first ever Jackson’s MMA Series event.

Padilla has the crisp technique in his string arsenal that is indicative of a fighter who has striking coaches Brandon Gibson and Mike Valle in his gym’s training stable. Padilla has some exceptional power in his strikes and when he lands his combinations, Padilla’s aggressive style makes it very hard to counter. When opponents look to slip his punches Padilla can switch on his dominating grappling where Padilla is well versed in single and double leg takedowns. 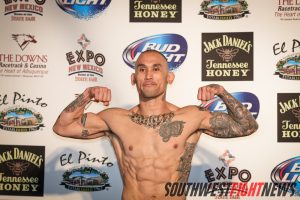 Coming from a military background, Padilla also has another asset that he brings with him to the cage. Padilla is very tough. He is tough in the sense that he will press forward even if it means he will get him coming in, in the context that he has seen adversity in his professional career and endured and being that Padilla has the rare skill to turn on an “instinct mode” allowing him to find a way to will his way past any obstacle. In his last bout back at Jackson’s MMA Series X, Padilla would be stunned and nearly finished by his opponent Rolando Cespedes in two of the three rounds. Fighting through the near-finishes, Padilla went home with a unanimous decision victory and earned the chance to headline this event.

Padilla is known to push a high pace and that has done one of two things to opposition so far in his professional career. Either that pace has worked to wear down an opponent quickly allowing Padilla to pounce looking for the TKO finish or it has worked as a gradual “beat down” helping Padilla win his last two bouts by unanimous decision.

Both of these fighters are very exciting and extremely durable fighters with Rhoads having the higher finishing rate. Padilla may be able to grind through Rhoads en route to a dominant decision or TKO stoppage but Rhoads has the ability to wear down Padilla, pushing the pace until he has a vulnerable Padilla awaiting a submission. Both fighters have the skills in their striking arsenal to nullify all of that and just end the fight by knockout making this bout extremely hard to predict and potentially a “Fight of the Night” candidate for the August 10th event.

The main event is just one of several exciting scheduled bouts for the Jackson’s MMA Series XI event. Stay tuned for more event coverage, fight breakdowns and analysis. As always, SWFight.com encourages the local fight fans to get out to Tingley Coliseum to support our local, hard-working athletes. SWFight.com is your home for all of the event coverage including tomorrow night’s live blog and pkay-by-play for those of you who cannot make it out to the arena.

Why We’re so Hype for Tonight’s Sano vs. Tenneson Amateur Fight at Jackson’s MMA Series 11