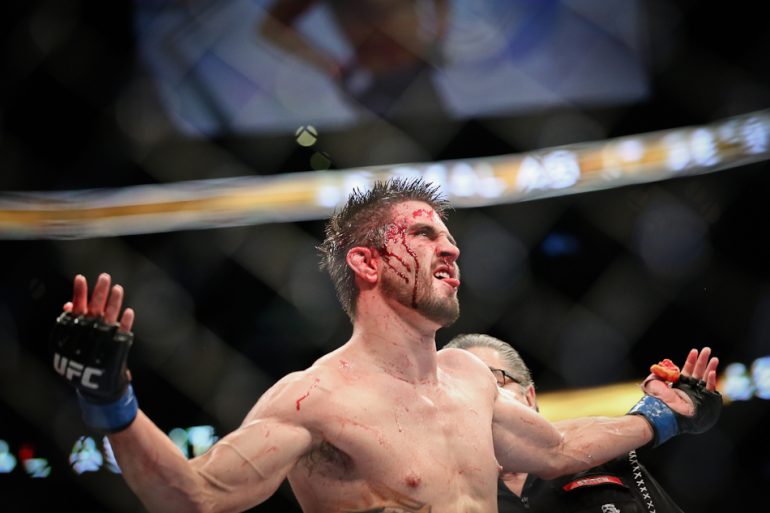 When Carlos Condit (28-7) fought Martin Kampmann (20-6) back in April of 2009, fight fans everywhere were salivating for a fourth round after the pair fought to a judge’s decision. Condit and Kampmann would battle back and forth for fifteen minutes as the headlining feature bout on the UFC Fight Night 18 event in Nashville, Tennessee. While the bout ended in a split decision victory in favor of Kampmann, many had solid arguments to make for the fight to be swayed towards Condit and for the past four years a re-match has been heavily anticipated.

The news months ago that we would indeed get the rematch. In just two short weeks on August 28th, the pair will lock horns again as the headlining act for the second UFC show on Fox Sports 1.

If we take a retrospective glance back on the first fight we have Carlos “The Natural Born Killer” Condit making his UFC debut coming over from the WEC. Condit was the promotions champion and came into the new organization with hype of becoming a quick challenger to the Welterweight title. Martin “The Hitman” Kampmann was a six fight UFC veteran and had just won his first fight as a 170-pound Welterweight four months previous. Each fighter had a claim as potential title contender in the weight class. Condit brought his WEC championship pedigree and Kampmann brought with him success as a middleweight in the UFC.

From the opening bell it became apparent that those in attendance and viewers watching it on the television would be treated to an all out brawl. Condit landed hard on Kampmann, Kampmann countered with a takedown and submission attempt. Condit would reverse position and Kampmann would sweep back into top control. Condit upon getting to his feet would land a strike that bloodied Kampmann and Kampmann would fire back stunning Condit. It would be an epic first round that had media members and fans divided as to who was the clear victor of the round.

The second frame would be much of the same as Kampmann earned a takedown and Condit would show his tricky and crafty guard to defend while attacking from his back. On the feet, Condit would utilize his length and risky striking arsenal as Kampmann would respond with his tight, technical punches. At the conclusion of the round, it would once again be razor thin making it nearly impossible to score the round.

In the third and final round, Kampmann would control the pace throughout as he gained top position from a takedown and would work patiently and effectively from atop Condit. While Condit would still attack with submissions and strikes from the bottom, it was apparent that Kampmann controlled and remained aggressive from his position. It was the only round that was decisively awarded and it would be a crucial one as the judge’s awarded the split decision victory to Kampmann. The final cards would read 29-28 for Condit and 29-28 (twice) for Kampmann.

While the loss spoiled the debut of Condit, his performance earned him not only UFC fans but respect from the entire Welterweight division. Despite the loss, Condit was treated as if he won which was best shown by the UFC featuring him in a consecutive main event against another formidable foe in Jake Ellenberger. Kampmann would also move up the ladder as he was awarded a main card slot on a PPV event against top contender Paul Daley.

The road since the fight has been mixed for both fighters. Kampmann has never found a consistent road to the title running a record of 5-4 with wins over Jake Ellenberger and Thiago Alves and losses to Diego Sanchez and Johny Hendricks in that span. Condit would reach the pinnacle of the Welterweight division, after losing to Kampmann he would make a run of 5-0 that included finishes of Dan Hardy and Rory McDonald as well as an Interim Title victory of Nick Diaz.

However, Condit has fallen onto some rough times losing his unification bout with Champion St. Pierre and would lose again in his fight after the bout to current number one contender Johny Hendricks. In both bouts, it was evident that wrestling was the poison of choice to defeat Condit and in a bout Condit desperately needs to win to remain relevant, the UFC paired him with a Dutch kickboxer in Kampmann that will be more then willing to exchange strikes much like their first bout.

Condit through defeat still showcased high level, elite striking skills which may have best been displayed when he very nearly finished St. Pierre with a head kick in their championship bout. In the bout with Hendricks, Condit avoided the power shots of his opponents and landed elbows and knees throughout the fifteen minutes of fighting. While grounded by Hendricks and St. Pierre, Condit still showed activity from his back in blooding the faces of both foes.

There is a lot on the line for this fight for both fighters as a third loss for Condit and a second loss for Kampmann could really spell the end for divisional title chances. Condit can escape too much trouble with his two losses as one of them was for the title against one of the sports premier fighters, but a third consecutive will really put him into danger of losing his chances as remaining top ranked. For Kampmann, a second loss would put him into jeopardy of keeping his comfort as a UFC fighter. The UFC has cut a lot of notable fighters as they continue to expand their roster with new fighters in the newer weight classes.

Expect two hungry Welterweights come August 28th and be in anticipation of fireworks as these two fighters are almost tailor made for one another to bring out the best of their skill sets. Stay tuned to SWFight.com for more event coverage, bout breakdowns and all the MMA news for New Mexico combat sports.