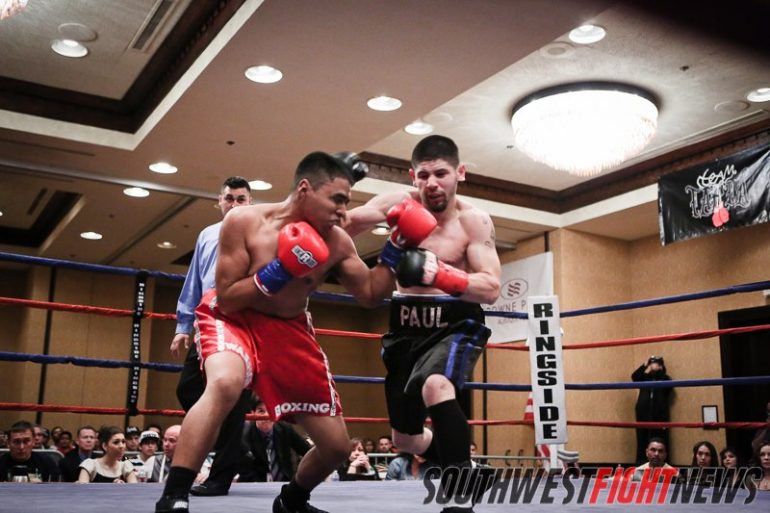 The first half of the year has seen our two biggest boxing stars not very active. Holly Holm announced her retirement after her only fight this year and is now making a full time transition into mixed martial arts and in April, Austin Trout lost a decision to Saul “Canelo” Alvarez in a fight that was much more competitive than the judges scores indicated.

A big surprise this year has been the professional boxing debut of Albuquerque heavyweight Cody East, who has gone 2-0 with two knockouts including a stoppage of a former Texas Golden Gloves champion.

The biggest disappointments we feel are the fact that New Mexico and El Paso fighters continue to be pinned against each other.

It’s a no brainer. With Holly Holm retired and the state’s most talented boxer Austin Trout winless this year, the nod goes to Albuquerque’s Fidel Maldonado Jr. who so far this year has won his fights by early stoppages.

Against the advice of his world renown advisor and manager Cameron Duncan, Maldonado took at fight against hard hitting Jorge Romero in February in Mexico. He also continued his road warrior ways and faced Abraham Alvarez Osuna three months later.The fight was a late notice one but Maldonado was in shape as he was looking to face 23-1 Luis Ramos in a bout that with a victory would have catapulted to title contention talk. Unfortunately, that fight fell through as Ramos pulled out for personal issues. Let’s hope that fight gets rescheduled!

to the top fighters of the state. There was a breath of fresh air in March however. None of us expected the show Team Tapia Boxing Academy’s Paul Castillo and Warrior Boxing’s Diego Bautista would give us at Johnny Tapia Presents: The Next Chapter 3.

Here’s how we saw the action that evening:
The first two rounds saw these men trade knockdowns both of which appeared to be caused my fouls. The first came in the form of Paul Castillo throwing a hard over the top right hand that did seriously hurt Diego Bautista but would floor him in combination of an inadvertent trip not seen by the referee.

The second knockdown came as the crowd chanted “Diego! Diego!” Castillo would join them by mocking the chants of his opponents name and waving his hand in the air. This moment of carelessness opened the opportunity for him to get caught by a serious three punch hook combination to the face capitalized with an over the top right hand to the back of the head. Castillo would struggle to get up and once action resumed Bautista appeared to at one point have Castillo out on his feet. Castillo’s arm would dangle on the top rope for a few seconds but a straight right from Bautista would reawaken him.

Regaining his composure in the third Castillo would look to time a tired Bautista. Both men were patient but is was a huge right cross from Castillo that would highlight the round. Bautista would shake the punch off by dancing (think Adrian Broner).

The final stanza would be controlled by Castillo’s pressure and speed. Bautista’s punches would lose their accuracy but would find a home in the final ten seconds of the fight.

Against the advice of his world renown manager Cameron Duncan, Maldonado took a fight against the hard hitting Romero. The Mexican was on a seven fight win streak and had won his last six bouts by way of knockout.

The blow would send him falling straight back, feet glued to the ground. His legs were gone completely, they and his equilibrium would let him down. As Romero attempted to use his arms to get him of the canvass he would tip over to his left forcing referee Jose Guadalupe Garcia to stop the contest before even reaching the count of six.

never expected what would come about.

Here’s how we saw the contest:
Guereca purposely grabbed Muñoz’ right arm for most of the round to the dismay of the crowd. Once the arm was free, Muñoz would land consecutive uppercuts with it.

As the men battled in the trenches, Guereca would force his forehead into the center of Muñoz’ chest, throw an over the top right and as he pulled his head from Muñoz’ body would land a very slick thunderous left uppercut. The punch would catch Muñoz solidly against the chin sending him flat on his back.

Muñoz would quickly attempt to stand back up but was extremely dazed and struggled to first get up from his hands and knees. He would beat the ten count but would stagger as referee Rocky Burke asked him if he could continue. Burke would rightfully wave the fight off with one second left in the round.

Ticket Sales One of Many Ways to Support Local Fighters