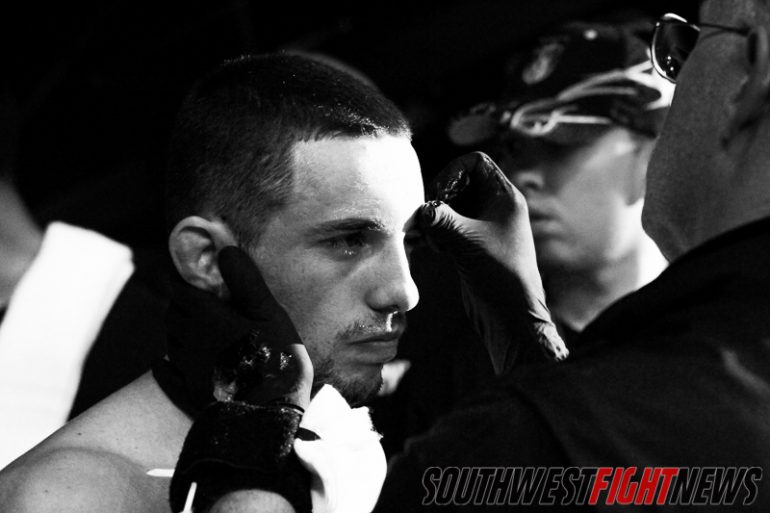 SWFight.com is excited to introduce a new feature to the site! We will periodically be playing the role of match maker and creating dream match ups between local fighters where we will take a look at each fighter’s style, career and opponent comparison. While the fighters will be assessed as accurate as possible, the outcomes and analysis of the match up will be strictly for fun and will show no bias or favoritism. We hope to intrigue readers and make this feature into a method to have a fun and entertaining debate. We would never attempt to diminish a fighter’s abilities or cast a negative perception on their skill set.

We hope you enjoy the breakdowns!

For our first dream match up, we come very close to reality as we discuss a rematch of a fight that already took place in Clovis, New Mexico. In May 2011, Evolution Combat Sports Championships hosted Friday Night Fights 4 which was main evented by a flyweight 125-pound bout that ended in a razor thin split decision after a hard fought, back and forth affair from two very talented New Mexico fighters.

Gracie Barra and Chavez Dojo’s Rafael “Barata” de Freitas would leave Clovis with a narrow victory after a memorable fight with opponent, Alchemy BJJ’s Joshua “the Destroya” Montoya. The fight solidified the idea that non-title bouts should always be in consideration to be scheduled for five rounds. The two warriors put it all on the line for fifteen minutes only for the result to be debated back and forth by those in attendance. While the Clovis crowd was in support of Montoya, two out of three judges would score the bout 29-28 in favor of de Freitas.

“Barata” has fought plenty since this fight against the likes of Eric Buck and Antonio Banuelos. Barata defeated Buck for the second time in his still very fresh MMA career and left Texas with a draw over the former WEC fighter in Banuelos. The flyweight prospect has also stayed busy competing in elite Jiu Jitsu tournaments. Montoya has seen mixed results since the bout, going 3-3 since the fight including a huge win in a redemption match over undefeated Jason Sampson, in his home state of Texas in December of 2011.

Montoya earned a flying knee victory over Frank Morris before landing a spot on Bellator 91 where he would be paired with Bellator mainstay Ed “Wild” West. After a very competitive first round, Montoya would succumb to a well timed kick from West that earned the referee stoppage. Montoya has also competed in the ESPN televised boxing event in Santa Fe during the time since his bout with Barata. 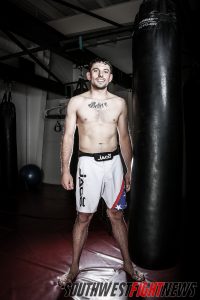 The match up would be compelling for a number of reasons, most notably that each fighter will be more prepared now that they have felt each other’s games out in an actual fight. While Barata was able to push the pace with his speed more often, it was Montoya who landed more of the power strikes. Each would adequately prepare for that in a rematch making the intrigue that much more interesting. The grappling was nearly a forgotten aspect of fighting once the fight started with the exception being a brief standing kimura attempt by Montoya and a near back take by Barata. The fight was mostly a stand up affair with Montoya stuffing Barata’s takedowns and attempts to take the fight to the mat.

The first round of the fight arguably scored in the favor of Montoya. While Barata pushed the pace with his kicks and agility, Montoya stood strong on his base to throw counter hooks and jabs. Several times in the opening frame, Montoya caught Barata with counter hooks and overhand right hands that looked as if they might drop him to the mat. A flying knee and spinning back-fist both nearly landed for Montoya and his effective striking seemingly won him the round.

In the second frame, it was convincingly Barata’s round as the high energy and speed overwhelmed Montoya over the course of five minutes. Barata’s high output of strikes dictated the pace over the course of the round and he landed several inside leg kicks that visibly effected Montoya. The only moment of danger for Barata in the round was when Montoya nearly extended out a straight armbar/kimura attempt standing as Barata attempted to take Montoya’s back along the cage.

Heading into the final round, the fight arguably was even at 1-1 with each fighter winning a round. Montoya had established his counter strikes and Barata had pushed the pace for ten minutes. Montoya landed more effective single strikes while Barata was landing more often but with less significant power. It was anyone’s fight heading into the third round and the two New Mexico fighters did not disappoint fans in attendance who were on their feet hoping that the close fight would remain competitive.

After catching an inside kick, Montoya unleashed a powerful outside leg kick that forced Barata into a full spin to which Barata playfully turned into an unorthodox stance that he attacked out of bouncing on one leg. Montoya would throw the power leg kick again nearly chopping Barata down to the mat. Moments later, Barata would go back on the offensive chasing down the counter punching Montoya landing kicks and punches a plenty forcing the fight into the cage. The fighters dueled in close range with even results as Barata focused on the kicks and clinch and Montoya with the punches and controlling distance.

After Barata landed a head kick, punch combination it looked as if the early momentum of Montoya had shifted to the Chavez Dojo fighter. Then after a failed single leg from Barata, the roller coaster of momentum turns continued as the defending Montoya rose to his feet only to land another power outside leg kick. While getting their range together, Barata landed a straight punch that stunned Montoya and got Barata to a favorable clinch position.

With the position, the Brazilian Jiu Jitsu Black Belt dragged down the Purple Belt Montoya to the mat. However, Montoya slickly rolled as Barata was establishing back mount and got back to his feet leaving Barata with his back on the fence in a sitting position. Barata would attempt to keep Montoya grounded, looking to isolate the shoulder to possibly set up his invented “Barataplata” submission. Montoya would land some ground punches and escape the grip Barata had captured. Upon returning to their feet, the two fighters would reestablish rhythm until Barata planted Montoya on one knee with yet another inside leg kick. On the fence being swarmed, Montoya would get the crowd screaming with a right hand counter that looked as if it would topple over Barata.

The crowd would be on their feet as Montoya threw, Barata threw, Montoya threw and Barata threw strike after strike at one other each not ready to succumb to the other. In a true test of will and heart, both Montoya and Barata put it all on the line for that final round. While both fighters were visibly exhausted in the final seconds, they left the Clovis crowd with an epic display of mixed martial arts action.

The judges in the arena would score it 29-28 twice for Barata and 29-28 once for Montoya much to the dismay of the crowd. While the fight could have been fairly been awarded to both as well as being recognized as a draw, the official win stays with Barata. In a fight so contested and exciting, it is a shame that a winner or loser has to be decided.

While each has undoubtedly worked on their game since the epic bout it would be a dream match up for SWFight.com and fans of regional MMA to see where each fighter has made their progressions since their match up. The younger Montoya has made strides in his stand up game as shown in his fights with Sampson and against Frank Morris. Barata on the other hand has been less active in MMA and from what we saw in his recent match up with Eric Buck and Antonio Banuelos, he is still the slick and savvy submission artist we’ve known him to be.

Picking a winner is extremely tough as they showed in their split decision outcome that they were very evenly matched. Would the promotion to Brazilian Jiu Jitsu Brown Belt be more likely to test the grappling chops of Barata’s Black Belt skill set? Would the heavily improved striker in Montoya be able to finish what he nearly started when he repeatedly stunned Barata? Would Barata’s speed and agility still give Montoya fits and will his laser quick inside kicks be fight altering once again? These are just a few of the exciting aspects of the fight that fans would benefit from in a re-match.

The hiccup in the fight may be size however, as Montoya had difficulty in his cut down to 125-pounds. Even though Barata fought after the Montoya fight at the bantamweight, 135-pound limit he and his team have expressed their desire to continue to pursue his career at 125-pounds. Regardless, this is a fight that would treat the New Mexico fans to so many different technical aspects of mixed martial arts.

Barata vs. Monotya? Who do you all pick? And who would want to the epic re-match go down in New Mexico?