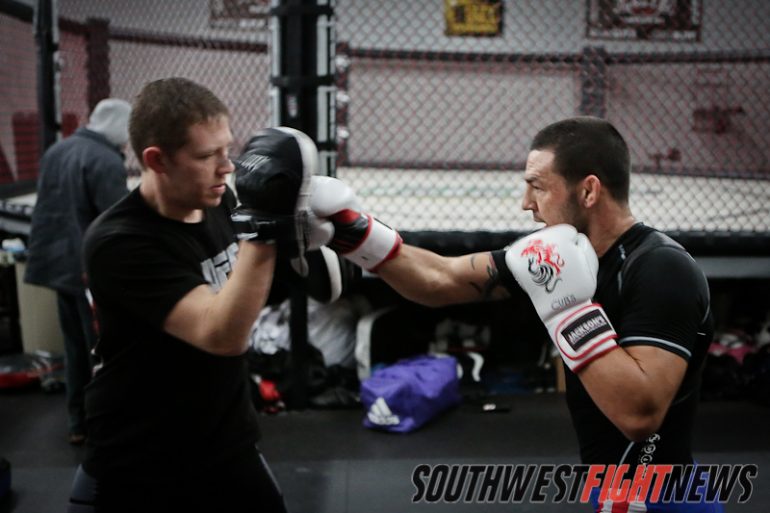 There will be a fight card of epic proportions going down tonight. July 6th will be the date it all goes down when UFC 162 is live inside the MGM Grand Garden Arena in Las Vegas, Nevada. In the main event of the evening, The Pound-For-Pound greatest fighter in the world Anderson Silva will defend his Middleweight Title against one of the sports most promising prospects Chris Weidman. Also scheduled for the event, former Lightweight Champion Frankie Edgar, former middleweight contender Tim Boetsch, fan favorites Chris Leben and Edson Barboza, as well as Tom and Arlene Vaughn trained Seth Baczynski.

In addition to all that excitement, there is one more main card bout scheduled that should have New Mexico fight fans glued to the TV screens Saturday night. Jackson-Winklejohn fighter Cub Swanson (19-5) takes on the versatile striking of Dennis Siver (21-8) in what many believe is a title eliminator for the 145-pound Featherweight division.

Earlier this year in February, Cub Swanson picked up that key win at the UFC ON FUEL 7 event over Dustin Poirier. While Cub didn’t earn the finish in their three round bout, he did show his ability to win a fight against a very formidable grappler and hard hitter in Poirier. Many believed the win would launch Swanson into title talks and they were right as his fight with Siver is considered by many to be Swanson’s audition for a title fight.

The German Karate savant Siver is no slouch and will not be overlooked by Swanson. The former Lightweight is on a two-fight win streak since his cut down to Featherweight. Siver has announced his arrival into a new division with convincing, unanimous decision victories over Nam Phan and Diego Nunes. Before a loss to Donald Cerrone at 155-pounds, Siver was considered one of the next Lightweights to challenge for the title. With that under his belt, Siver can find a quick path towards championship glory with a win over Swanson.

While Swanson has beat strikers before, knocking out Ross Pearson and George Roop; he will need an effective and technical striking arsenal to best Siver. The German fighter has crisp striking and comes from a background of striking that rivals anyone in the division. While Swanson has power to end the fight, Siver has the discipline, cardio and striking skills to fight with a frenetic pace for the duration of 15-minutes.

While training under the tutelage of striking Coaches Mike Winklejohn, Joel Diaz and Brandon Gibson, Swanson has evolved into a premier (even elite) level striker over the years. Interestingly, Diaz is the striking coach for World Champion boxer Timothy Bradley. Add in the world class kickboxing skills Coaches Winklejohn and Gibson bring, Swanson has a diverse striking arsenal that has made him one of the most dangerous strikers at 145-pounds. His combinations are lethally accurate and his strikes land with impressive knockout force.

It has been a very long road since Swanson’s first chance at Championship glory back in 2009 when he met up with current UFC Champion and at the time, WEC prospect Jose Aldo. With a win over Siver he may very well get his chance at redemption fighting Aldo and opportunity to finally get that World Championship Title Fight.

If that wasn’t enough reason to watch UFC 162, Swanson’s teammate Tim Kennedy will be in action on the main card as well. He will have a very interesting match up as the wrestling based Kennedy drew Jiu Jitsu Icon Roger Gracie in a fight that will be UFC debuts for both fighters.

Stay tuned to SWFight.com for updates and results. We encourage all the fight fans in New Mexico to tune into the UFC 162 Pay-Per-View and catch Cub Swanson fighting for title implications. We send our best wishes to Swanson and teammate Kennedy in tonight’s event.