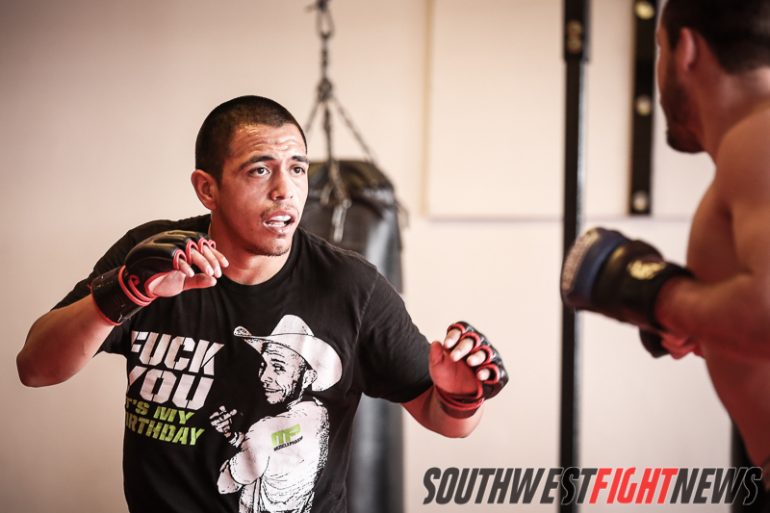 Sometimes match-making can be very difficult in combat sports. You must decide how you want to pair people up, whether by the fighter’s records or there win/loss streaks and maybe even based on styles of the fighters and whether you believe matching a grappler with a striker is a good idea. Is there a fighter being pushed towards superstardom that needs to be paired with someone not able to exploit their weakness or is there a fighter that needs to be paired with elite talent in order to show up with his A-game? While the process may be difficult, Bellator 97 has a bout that was almost too easy in creating. At the inaugural Triple-A-MMA event this past April, the main card was featured on the slogan “Win To Get In” which implied a win for that event would eventually grant the victor a fight for Bellator MMA. The four winners of the professional card now will go on to compete on the Bellator 97 undercard.

With the bout between Judgement MMA’s Adrian Cruz and Mean 1 MMA’s Felipe Chavez already announced and broken down, we move on to the next match up scheduled for the card between Mean 1 MMA’s Javier Palacios (1-0) who will face off with Gracie Barra Las Cruces fighter Richard Jacques (1-0).

Palacios punched his ticket to the Bellator 97 card with a win over a teammate of Jacques, when he took home the unanimous decision victory over Steven Ortega at the Tripe-A-MMA event. The Mean 1 MMA fighter set a steady pace of offense over the course of fifteen minutes in a fight where Ortega was always creeping back into the fight until Palacios would put together his combinations and strikes to the body.

In a very impressive manner, Gracie Barra’s Jacques forced Eric White to quit on his stool. After the second round, Albuquerque Kickboxing’s White did not answer the round three bell which would then award the victory over to Jacques who effectively punched his ticket to the bigger show. Jacques showed his grappling chops effectively over the course of the fight and complimented it with effective striking that wore down White over the course of ten minutes.

The match up will be highly intriguing from the fan perspective as both fighters contrast enough to make a game plan necessary but similar enough to wonder what fighter can execute it the best. They both have shown their strengths in different areas, Palacios with his stand up and Jacques in his grappling but they both like to dictate the pace and use their skill set to fight offensively.

There is also significance in this bout in the context that a win and loss will mean so much for the 1-0 professionals. A win propels their record to 2-0 and the loser will end up at 1-1. While the numbers only contrast a difference of 1; at this level it is much more meaningful to keep a winning record intact to remain on the positive side of promotions like Bellator where they are more likely to promote you if you have a winning record.

Stay tuned to SWFight.com for more Bellator 97 event coverage, bout breakdowns and analysis. We encourage fight fans to show their support to these hard working locals who undoubtedly will be putting it all on the line for their hometown crowd inside the Santa Ana Star Center in Rio Rancho, New Mexico.

Tickets can be purchased by clicking here.