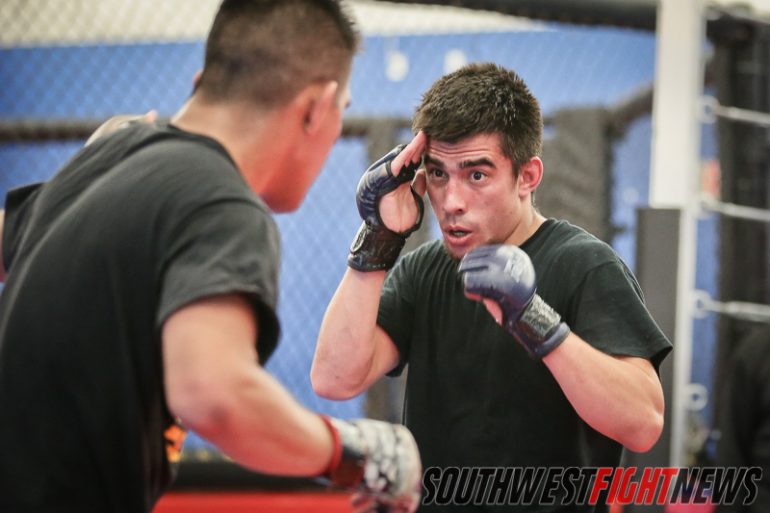 There has been a late addition to the Bellator 97 fight card being held next Wednesday on July 31st. The event will be held inside the Santa Ana Star Center in Rio Rancho and is set to feature several prominent local MMA fighters including FIT NHB’s Frank Baca competing in the promotions Bantamweight Tournament.

Expected to fight on the card, Mean 1 MMA’s Steve Garcia was forced to pull out of the event due to injury and according to Bellator.com, Lovato Total Fitness fighter Russell Wilson (1-2) will step in on short notice to take on the task of preparing in 7-days to compete against the highly talented Shawn Bunch (1-0).

Bunch will come from the same championship pedigree as Bellator 97 fighters Bubba Jenkins and Will Brooks. Arguably, Bunch surpasses the normal collegiate pedigree having attended the highly accredited Edinboro University of Pennsylvania where their wrestling program is a no-nonsense, blue collar program that produces All-Americans and NCAA top ten finishers consistently year in and year out. Bunch most notably earned the role as a World Team Member and U.S. Olympic Alternate. Equipped with an insanely effective double leg, Bunch dominated in his only MMA bout where he took down Chad Coon down at will back in November at Bellator 82.

Wilson is no stranger to the bright lights of Bellator MMA as the young, talented wrestling stand-out last competed at Bellator 91 where he fought in the evening’s “Fight of the Night” against Albuquerque trained Featherweight Andres Quintana. Russell would show that his stand up was solid, his wrestling was outstanding and his submission skills were dangerous.

While dropping the bout to Quintana late in the third and final round, Wilson impressed thoroughly in defeat. Coming from a state wrestling championship background, Wilson has been able to show his ability to strike effectively. His submission abilities are both defensively crafty and offensively powerful. He may not share the national accolades with Bunch but he brings his own blend of successful MMA talents.

This fight can be easily chalked up by anticipating whether or not Wilson can stifle the double leg and technical chain wrestling of Bunch and put on a better performance in the stand up. Wilson has shown his talents to be fan favorable and fight fans can expect an exciting fight between the pair.

Stay tuned to SWFight.com for more Bellator coverage, bout breakdowns and analysis. We are less than a week away from Bellator 97 which features such notable fighters as Ben Askren, Michael Chandler and “King Mo’ Lawal.