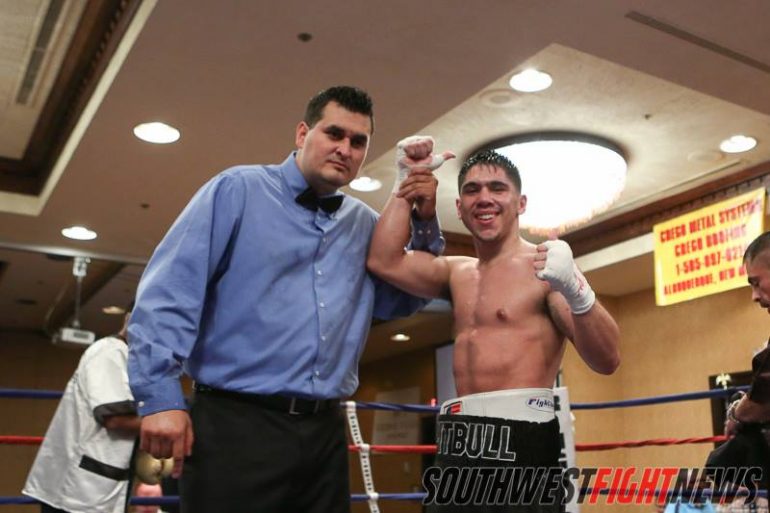 The fourth installment of Johnny Tapia Presents: The Next Chapter 4, Friday night at the Crowne Plaza Hotel in Albuquerque, New Mexico, saw a five-fight card filled with one-sided performances.

In the evenings main event Albuquerque’s top welterweight Josh Torres took an easy unanimous decision over Amarillo, Texas’, Marcus Brashears. The Texan was reluctant to come out of his turtle-shelled defense for most of the fight and did little to win any of the rounds. It wasn’t until after the fight that an engagement of any kind took place as Torres would propose to his longtime girlfriend and mother of their child.

You could say Torres went 2-0 that evening.

In the other main event of the evening Santa Fe’s Joaquin Zamora easily outpointed and outscored the much shorter Bernardo Guereca. Las Vegas’ Arturo Crespin improved his record to nine wins and two losses by overwhelming Albuquerque’s Charles Alderete, forcing the formers corner to throw in the towel in the last round of the contest. In a rematch from months ago, Adrian Lopez once again defeated Ricky Villafuerte by unanimous decision. A pair of fighters making their debut gave the small crowd on hand the only close fight of the evening as Brandon Muñoz and Julio Gomez fought a to majority draw.

Make sure you check out all the photos on our Facebook page https://www.facebook.com/SWFight.