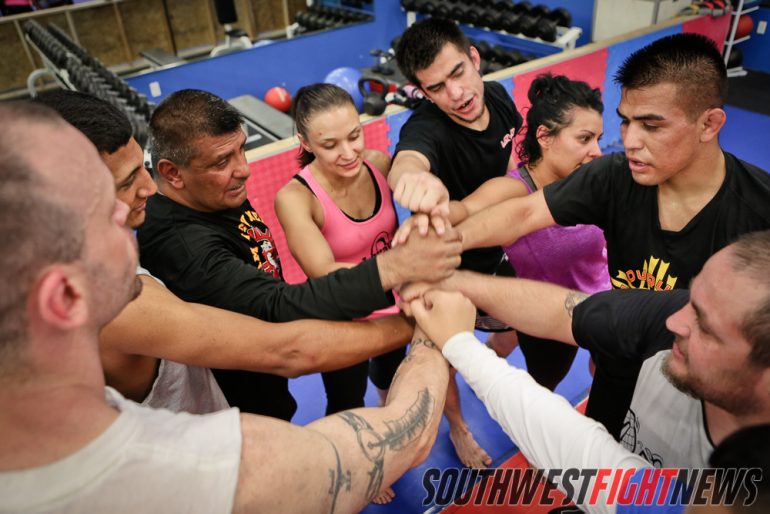 This past week SWFight.com paid a visit to one of New Mexico’s most popular combat sports gyms to take a peek in as to what is happening inside the Albuquerque based gym. Sitting in on a Jiu Jitsu and MMA class we got an up close and personal look inside Lovato Total Fitness.

The gym is located at the address of 6500 Hanover NW right off of I-40 in a massive warehouse equipped with a cage, a boxing ring, plenty of mat space, cardio and weight machines. The gym is lead by Head Coach Lenny Lovato Sr. who brings with him a plethora of wrestling success, not only as a coach but a competitor as well. Hailing from West Mesa High School, Coach Lovato has to his name a state title as a competitor as well as boasting four NCAA All-Americans and was inducted to New Mexico Wrestling Hall of Fame. 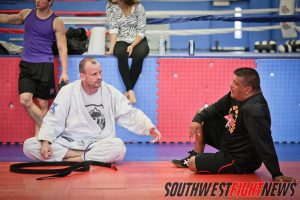 While the head coach is as decorated as they come in the wrestling world, the gym shows its diversity with Jiu Jitsu Coach and Black Belt Josh Lanier who has MMA experience to compliment several tournament victories and grappling titles.

The gym boasts several successful MMA fighters from the Lovato family who have found success in our region including Lenny “The Godfather” Lovato, Mikey “The Burque Bulldog” Lovato and Lynae Lovato. To add to the roster of success in the gym, Russell Wilson, Ron White, Steven Cervantes and Jesse Jaramillo all call the Lovato Total Fitness gym there home.

The gym is well known for their wrestling pedigree and that should come as no surprise as the gym has several state champion wrestlers as well as playing host to athletes who are making the jump to the collegiate wrestling level. The MMA and wrestling success of the gym has been promising since the gyms opening in 2011 as several amateur and professional fighters have taken big steps in the right direction in their careers. 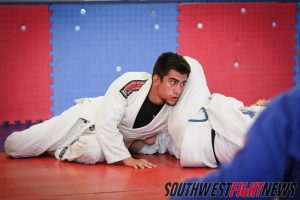 Russell Wilson working on a few drills in the Lanier’s gi class.

Keep an eye out for several upcoming events and bouts featuring Lovato fighters. Ron White and Russell Wilson are expected to be competing later this month in Colorado Springs. Joining the duo is Samantha Montoya, who is expected to make her amateur debut after competing in the gyms smokers. Josh Lanier returns to action later this year and Lenny Lovato Jr. is also expected to return to MMA action in the near future.

The gym is vast and full of avenues for physical progression, the people are welcoming and ready be part of an individual’s journey whether martial art related or not and SWFight.com encourages the locals to show their support of a thriving local business that supports our hard working athletes.