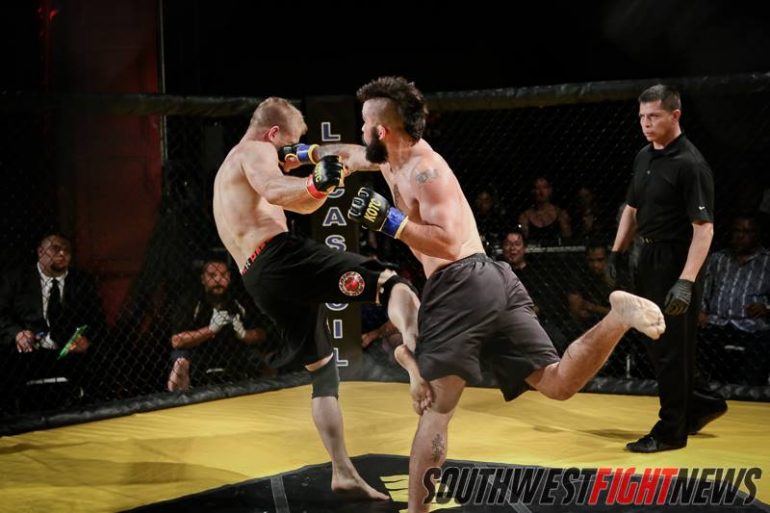 As is the case with most regional shows, not all of the locals fans can make the time to attend the event. Whether people have job obligations or just have other obligatory events going on, it is hard to make each and every show. SWFight.com makes every effort to bring fight fans the best coverage for fans in attendance and those not in attendance. When someone misses a regional fight, it is very difficult to find results or any sort of updated avenue to follow their local fighters. SWFight.com has attempted to consistently bring live updates via social media as well as having a round by round or fight by fight results article available for anyone to view. However, to add to our content and coverage we are adding a feature to the site called “The Next Day Perspective” where we have an opportunity to talk about the highlights and interesting aspects of the previous night’s events.

In this instance, we have King of the Cage “East vs. West” which was hosted by the Sunshine Theater in Downtown Albuquerque. The event filled up most of the venue and inside the theater environment, the crowd got very loud in support of their favorite local fighters. The event had several finishes and even in the judge’s decisions the fights had several moments of excitement.

In all, the event was an entertaining regional card full of our hard working local fighters. Several of the events participants have made a name for themselves to become anticipated fighters for upcoming events. The Sunshine Theater was loud on Saturday night and hopefully regional fight fans bring that passion and those roars of support to the next regional show which looks to scheduled for July 31st inside the Santa Ana Star Center for Bellator 97. Stay tuned for more fight news, coverage and breakdowns and a huge thank you from SWFight.com to everyone supporting our pursuit of innovative, fun and thorough coverage for all of our local fighters and events.