SWFight.com names 5 things to watch for tonight at King of the Cage “East vs. West”

Tonight is the night King of the Cage fans within New Mexico have been waiting for! The promotions first show of 2013 is inside Albuquerque’s Sunshine Theater later this evening for their event titled “East vs. West”. The show is full of local talent and for all the in-depth breakdowns of participating fighters head over to SWFight.com where we have all the original content and thorough analysis for your viewing pleasure.

For those fight fans attending the show and those who just want to keep current with their regional MMA fighting scene, we have put together a list of five key components to be on the lookout for in tonight’s fight card.

1. The young guns filling up the undercard.

Earlier in the week we detailed the fresh and promising young careers of Jacob Espana and Jerome Rivera. Representing the Albuquerque Kickboxing Academy and Judgement MMA gym respectively, the youth of the two amateurs is overwhelmingly impressive.

Those two aside, also making their debuts are Mark Vogel, Get Fit Fight Gym’s Robert Chavez and Damage Inc’s Ray Vaiza III. The new wave of this generation fighters are coming full force and it will be in plain sight in tonight’s undercard. Look for younger fighters to look well rounded and athletic, more so then what fighters looked like years ago.

We fully expect exciting bouts from our young fighters and they should set the tone early on for what promises to be a fun night of mixed martial arts action.

2. King of the Cage Back To Albuquerque

December 6th, 2008 was the last time King of the Cage was in Albuquerque, New Mexico and on that date in the Isleta Casino, then Champion Abel Cullum headlined a show that included Angelo Sanchez, Donald Sanchez, Alberto Crane, Quinn Mulhern and Felipe Chavez.

It has been a long road traveled since then as the promotion has had shows in Ruidoso and Pojoaque. They have also lost several of their local stars as they have moved on to other shows. Mulhern made the jump to the UFC, Donald Sanchez has competed around the world and Cullum became a popular fighter for Japanese promotions.

Fast forward to tonight and the King of the Cage promotion has local star and Amateur Champion Tim Sosa on the card as well as potential new Heavyweight Champion Cody East. Either fighter has the capabilities to become the promotions top in-state draw.

3. The Lighter Weights Dominate The Card

It is well known to the fans of the New Mexico areas fight scene that while we host tons of elite talent, we hardly feature the heavier weight classes. Outside of two scheduled fights for tonight, the other ten bouts all feature fights in the 155-pound division and lower. From 125-pounds to 155-pounds is where we typically see most of our local fights and because of that each division in that range is packed with talent and intriguing match ups.

As per the case with so many studies of weight classes, the lighter weights are known less for knockouts and more for ground fighting and cardio. Expect to see very conditioned athletes who can launch strikes at one another for fifteen minutes if needed and also expect to see some good ground battles whether it is ground and pound or submissions.

4. Heavyweight Title Back In New Mexico

The King of the Cage Title was first awarded to the first ever winner in New Mexico and now years later it will come back. Former Champion Tony Lopez has defeated both East Brothers (Tyler & Cody), keeping them from holding promotional gold. Now Cody East will have his second crack at it but this time against freshly crowned champ Nick Rossborough.

East is a physically imposing fighter much like his nickname “Freight Train” suggests. He has very powerful strikes and has strength that really defines that of a heavyweight. While Rossborough is a large man himself, East has trained at several camps within Albuquerque and has proven to be a very tough training partner for the best heavier weight fighters in the area.

With a win, East becomes the newest King of the Cage champion from New Mexico and joins a list of fighters that includes Quinn Mulhern, Frank Baca and Abel Cullum. He will capture the most relevant Heavyweight Title of any New Mexican currently active in MMA.

After several years as a successful amateur, FIT NHB’s Tim “Timbo Slice” Sosa will turn professional. He faces off with an opponent he lost too in the amateur ranks and in turning pro will vacate his 125-pound World Amateur Championship Title. It is an expected event in the career of Sosa, as many believed he would make the turn in 2012.

Sosa represents the new hybrid style of fighting that the evolving and new generation possesses. He has solid kickboxing, sharp wrestling and the ability to adapt in fights. He is also an incredible self-promoter, Sosa is considered one of the more entertaining personalities in the New Mexico fight scene. Fight fans can always expect entertainment in a Sosa bout and this fight should be no different.

SWFight.com will be inside the Sunshine Theater tonight for the King of the Cage event. Fight fans in attendance, we hope to hear your cheers of support for our locals and those who aren’t attending stay tuned to our Facebook and other social media pages for fight updates and results.

King of the Cage “East vs. West” Weigh In Results 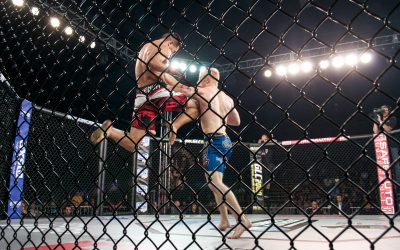 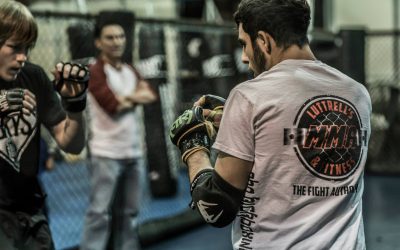 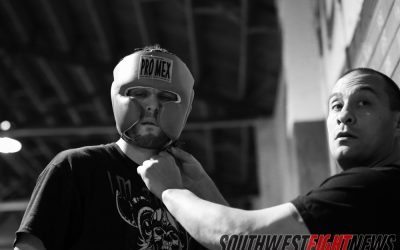 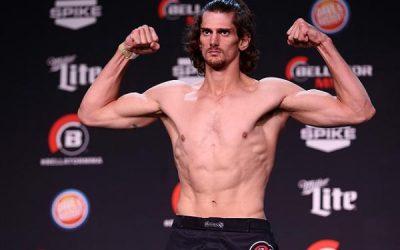