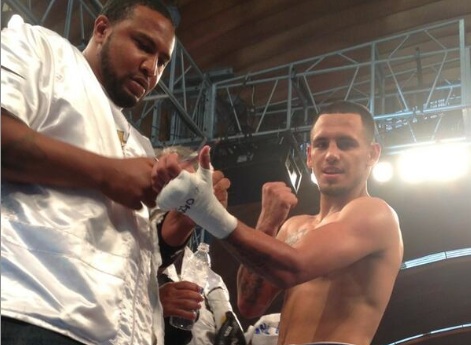 The following report was originally posted by the online publication Quequi on their Facebook page in Spanish. We have translated it to the best of our ability. Make sure to like their Facebook page by clicking here. We appreciate their updates on the fight.

“In the second fight [sic in Spanish report] of the evening, showing the strength he has in his hands, the native of Albuquerque,

United States, Fidel “The Atrisco Kid” Maldonado Jr., “anesthetized” in the initial assault (1.44 seconds), the native of Culiacan, Sinaloa, Abraham “The Swift” Alvarez, in a light welterweight fight that was supposed to go eight rounds.

There was no round of studying (each other), from the opening bell both fighters entered and exchanged shrapnel during the first round, Maldonado landed a straight left shot against the body of Alvarez, who immediately knelt and complained of an illegal blow, so the referee Fernando Lopez let him recover.

The action continued in the same round and the American immediately attacked with a flurry of punches to the Sinaloan [sic in Spanish report], who visited the canvas where he heard a count to 10.

With this result Maldonado added win number 16, with two defeats and 13 knockouts while Alvarez was left with 16 wins, four defeats, on draw and seven knockouts.”