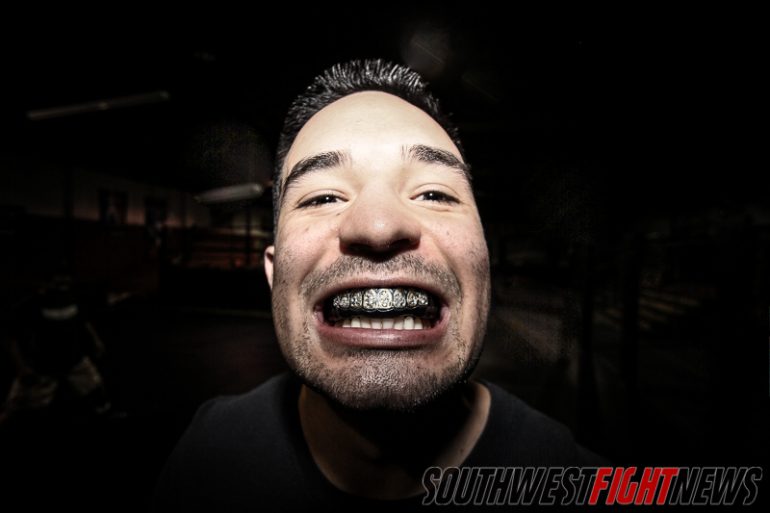 Tim Sosa is ending the chapter on an extensive amateur career and opening up the new page as he begins his professional career. On June 22nd, just down the street from where Sosa trains at the Sunshine Theater in downtown Albuquerque, New Mexico, King of the Cage “East vs. West” will feature a whole slew of storylines for fans of regional MMA.

One of those storylines features Sosa, the King of the Cage Amateur 125-pound Champion making his professional debut after a four year, 15-fight amateur career. “Timbo Slice” will be making that debut interestingly enough against an opponent he faced in the amateur ranks. In fact, the opponent took a win over Sosa back in a 2009 Desert Extreme event in Los Lunas which just so happens to be Sosa’s hometown.

In that bout, Curtis Johnson was awarded a very narrow split decision win after three rounds of action. The bout was Sosa’s second documented amateur fight and would serve seemingly as a motivator as he would bounce back from the loss with five straight decisive victories in a row. Since the bout, Sosa has rattled off eleven wins in thirteen fights while Johnson has flown under the radar in comparison. Sosa had gone on to reach the pinnacle of the amateur ranks and now comes full circle facing off with Johnson once again.

Johnson similarly is now making his pro debut and will give up the experience advantage as Sosa has been fighting under the bright lights of the King of the Cage spotlight, Sosa clearly is favored in his opportunity for redemption as he is well acclimated to big fight scenarios having won and defended the King of the Cage 125-pound Amateur Title. As in the case of most rematches, the intrigue for fight fans comes in the improvement and overall progression made by both fighters since their previous face-off.

Clearly Sosa has taken huge strides throughout his amateur career, including an impressive five fight win streak since his last loss in 2011 where he has finished every single opponent via submission or technical knockout. The FIT NHB fighter has shown diversity in his skill set from a fourth round submission victory in his last outing to his first round stoppage due to strikes in his title capturing fight in September of 2012.

While Coaches Tom and Arlene Vaughn specialize in the striking facet of MMA, Sosa has shown that the Albuquerque gym boasts fighters who are well versed in several areas of mixed martial arts. Sosa is extremely explosive and can attack with takedowns, technical striking and submission grappling. He matches up favorably with Johnson this time around and should be able to showcase his every evolving skill set as he seeks to earn his first win as a professional.

A pro debut with chance at redemption from a loss early on in a career is just one of many storylines taking place this Saturday at King of the Cage “East vs. West”. Stay tuned to SWFight.com for more event coverage, fight breakdowns and post-fight analysis. SWFight.com will be live inside the Sunshine Theater on Saturday night and look forward to seeing all the fight fans coming out to show their support.