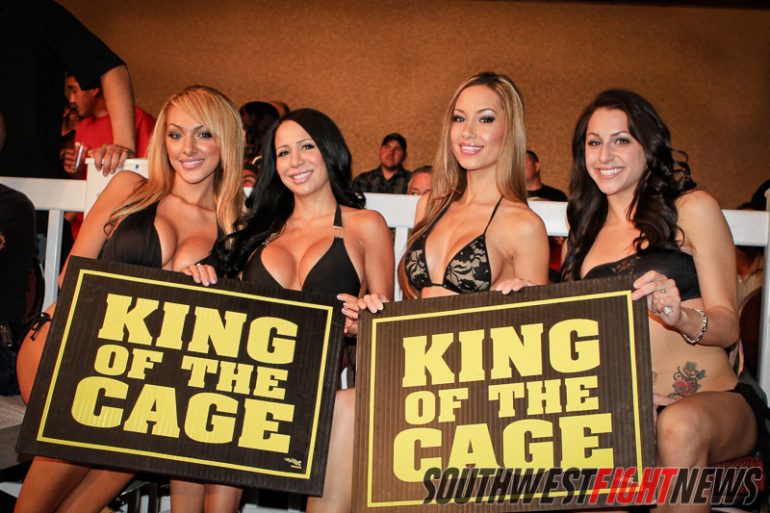 King of the Cage - Sunshine Theatre

This upcoming weekend, King of the Cage returns to Albuquerque!

“East vs. West” will be the first King of the Cage of 2013 to be hosted inside New Mexico and the popular regional promotion will return to Albuquerque’s Sunshine Theater on June 22nd with a very promising fight card to entertain local fight fans.

In the main event of the evening, Albuquerque based Cody East (5-1) will fight Champion Nick Rossborrough (23-16) of Jeremy Horns Elite Performance MMA in Orem, Utah for the King of the Cage Heavyweight Title. It will be the biggest fight in the career of East and marks the first title fight held in Albuquerque for King of the Cage in several years.

Also on the card, FIT NHB’s Tim “Timbo Slice” Sosa will make his professional debut after a successful stint as an amateur where Sosa had over ten wins and captured the promotions amateur World Title. The 125-pound flyweight will fight Custis Johnson of Soccoro who will also be making his professional debut. The fun back story in this one is that Johnson defeated Sosa in the amateur ranks and stands as one of the rare losses on Sosa’s resume.

Rounding out the professional card is a middleweight bout between Judgement MMA’s Josh Todd (0-1) and Terry “TJ” Nunalley (2-3) of Cheyenne, Wyoming.

The amateur card is packed with talent from not only Albuquerque but so many surrounding areas within New Mexico. From Santa Fe to El Paso, Texas and from Rio Rancho to Grants, this event has the state well represented for the amateur portion of the card.

Amongst the notable match ups will be a rematch of sorts as Shannon Curlee (1-2) of Judgement MMA faces off with Santa Fe Brazilian Jiu Jitsu Academy’s Aaron Perls (3-0). The pair fought earlier this year in a kickboxing smoker held inside Curlee’s home gym of Judgement MMA. Curlee won a judge’s decision after three rounds of solid, technical action.

Joining Curlee in representing Judgement MMA, John Rozema (2-0) who will be looking to continue in building his reputation of being a knockout artist when he puts his unblemished amateur record on the line against Vic Masayesva (1-2), an independent fighter out of Albuquerque. Teammate Jerome Rivera (amateur debut) will be facing off with El Paso’s Adrian Lopez (0-1). Rivera is an 18-year old bright prospect who has flourished in the boxing, kickboxing and Muay Thai scene as well as the Jiu Jitsu circuit. He is a young, bright prospect and while he trains out of Judgement MMA, he is also a product of Santa Fe’s Joshua Montoya.

Dorian Dixon (2-2) is becoming a popular name amongst the amateur scene and will be competing again on this fight card. Representing Rosales Kickboxing and Albuquerque BJJ, Dixon will add to his amateur experience. His teammate at Albuquerque BJJ, Mike Manning (2-0) will meet up with Los Vatos fighter Dominic Valencia.

The J5 MMA gym in Grants will also be sending two of their fighters to make the trip to Albuquerque. Brent James (4-1) will bring in with him the most extensive amateur career and will be matched with Ray Vaiza III (amateur debut) of Soccoro. Kyle Platero (0-2) will seek out his first amateur victory when he fights Jacob Espano (0-1) who represents Ray Yee’s Albuquerque Kickboxing Academy.

The card is extremely promising and should be a great event to make a mark as their first of the year for the promotion inside New Mexico. The fight card is full of locals and SWFight.com encourages fight fans to come down to the Sunshine Theater to support these hard working athletes. Stay tuned for more event coverage and fight breakdowns.

King of the Cage “East vs. West” Fight Card: