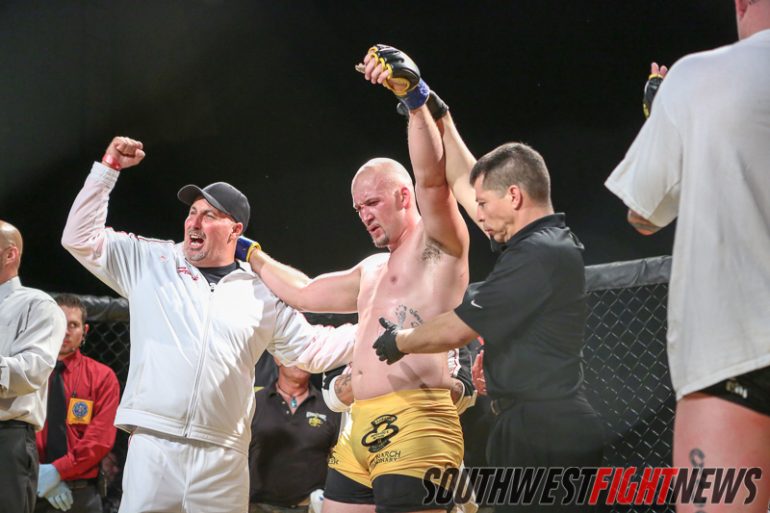 King of the Cage is live inside the Sunshine Theater tonight June 22nd, featuring a whole slew of exciting match ups and local fighters. Headlining the event is Albuquerque’s Cody East fighting Nick Rossborough for the promotions Heavyweight Title. Also on the card, FIT NHB’s Tim Sosa who will be making his pro debut against Curtis Johnson.

As always SWFight.com brings you all of your local MMA coverage and follow throughout the night for live updates and post-fight results.

King of the Cage “East vs. West” Results:

Espana came out circling and Platero rushed in with a superman punch that missed. Espana answered with his own flying punch and got in close to snatch on to a body lock. With the clinch, Espana would plant Platero to the mat where he would swiftly hunt for a Kimura. Espana would step over the head latched on to the arm and would really apply the pressure on Platero’s bad position. Platero would tap and Espana would get his second amateur win.

After both fighters exchanged punches, the two got into a scramble that led to Vogel with a top position. Vogel focused on positional advancing and snatched an arm bar. While Alba fought valiantly out of it, he eventually succumbed to the submission.

Rivera threw a front kick and then shot in for a takedown. Lopez would grab a guillotine and drag the fight down to the mat. Off of his back, Lopez closed up his guard and it looked like Rivera was in danger of being choked out. Rivera would stay composed and fight out of the submission. Rivera popped his head out and started unleashing brutal ground and pound as he hovered above Lopez in top position. Rivera would dive into the guard and land a body, body, head combination. Lopez would try to scramble out and Rivera would slickly take the back and lock in the fight ending submission. Rivera looked phenomenal for a debut fighter.

James and Vaiza would quickly meet in the middle of the cage where an initial flurry let to a scramble taking the fight down to the mats. With each fighter looking to stay off their backs, the two fighters would keep going on scrambling for position. James would get the position taking over the top game where he would advance smoothly and quickly into better position. With Vaiza’s arm isolated near the mat, James would grab the wrist as he began jockeying for a kimura. Using his strong base and wrist control, James cranked the arm behind the back of Vaiza making the kimura dangerously at a position that looked as if Vaiza would give up the dislocated shoulder then tap. While Vaiza hung tough in the submission, James would keep on with the pressure until the tap out came.

Masayesva would immediately close the distance clearing wanting no part in Rozema’s reputable power. After some takedowns and scrambling, Rozema would unload powerful shots on the ground and would continue to wrap around Masayesva like a snake remaining in dominant position. Masyesva defended valiantly but could not outlast the well conditioned and aggressive Rozema as the referee stepped in as Rozema unleashed from the back mount. Rozema has some serious power and his 3-0 record justifies that well with 3 TKO finishes.

Ronald Smith was just too strong and too well versed in the clinch. Smith immediately latched onto the neck of Chavez and never let it go as he unloaded knees and punches from a variation of a front head lock position. Quickly, Smith landed a brutal knee that floored Smith completely for the clean KO.

Stepping in on short notice Valdez would take on the well rounded Dixon. The Jiu Jitsu based Valdez immediately showed his hand and he rushed in for takedowns. He got Dixon down twice and worked some punches from top position. Dixon weathered well and defended while his Coach alerted him Valdez was tiring. Despite the defense, Dixon lost the opening round because he spent the duration beneath Valdez’s grappling.

t was first fight that made it out the first round and both fighters looked opposite coming off the stools. Dixon looked calm and Valdez tired. Valdez drove in after eating a jab and managed to get the fight to the cage with Dixon grounded. After a referee stand up, Valdez got a kick and shot for a single leg. Dixon defended with a standing guillotine. In a rolling scramble, Dixon took Valdez’ back but ended up once again underneath. When Valdez dove for a leg lock, Dixon started unleashing punches that nearly finished Valdez. Nonetheless, Valdez took the round with aggression and the takedowns.

A visibly stunned Valdez started the round looking exhausted. Dixon walked him down until he landed a big leg kick that prompted a takedown from Valdez. Dixon from the sprawl worked to the back of Valdez hunting a rear naked choke. Dixon spent minutes working the choke as Valdez went into defense mode. Never really getting his hooks in, the round ended with Dixon hunting the choke. Dixon won the round but may have lost the fight. The fans weren’t too excited about the bout, but Dixon didn’t push the pace and Valdez wore out after the first.

After some punches, Perls would throw a knee that Curlee caught for a takedown. Perls threw up a lightning quick triangle and it looked deep but Curlee worked to create space enough to keep from choking. The submission would be in too long, too deep as Perls would get the tap. Curlee really fought hard to escape but Perls was consistent and persistent in applying the choke.

The fight would be waved off while Manning was on the stool, prompted as a doctor stoppage. Good call as Manning really took some damage in that round and the cut he suffered was near the eye.

This was the first professional fight of the evening and it was between two fighters who had some heated words at the weigh ins. The two fighters exchanged blows early and Todd looked to land kicks while Nunalley worked punches. After Nunalley would attempt a spinning back kick, Todd landed a flush one of his own that landed clean. After Todd hurt Nunalley, Todd would nearly get the stoppage but Nunalley would survive. Nunalley would recover well and get to top position on Todd and would turn the tides with a barrage of punches. Just before the bell, the referee would wave off the fight.

Much to the dismay of the Albuquerque crowd, this fight was announced as cancelled due to Curtis Johnson being unable to make the event. Johnson is a firefighter and was called in to work on a mandatory call. Unfortunately, Sosa would not be in action and would be scheduled for the next event.

The crowd in strong support of Cody East as the chant of “Cody, Cody” echo inside the theater even during the announcement of Rossborrough. The two monster Heavyweights would attack evenly early with each fighter throwing inside low kicks. East would land first as the most significant striker wobbling Rossborrough and powering a double leg getting him to the ground. East would land some shots and solid knees to the body before Rossborrough would work to standing. The heavyweights spent the rest of the round exchanging strikes. East should win that round with the near finish and takedown.

East would start round two with another powerful combo to double leg takedown transition. Landing powerful knees, East looked like he may get the stoppage but the veteran Rossborrough covered up and defended. East and Rossborough would once again exchange strikes with East looking like he was tiring and Rossborough seemingly the fresher fighter. Knee in the clinch to the body lands for East and drops Rossborrough allowing East to open up with some ground strikes. Rossborrough would recover again. The round would continue with the two landing punches in exchanges. The round was an East round.

Third round starts with Rossborrough on the offensive and a tired East not doing much of anything. East countered with a power double leg and really tried to work some ground strikes. After a referee stand up, East was looking completely tired and Rossborrough began to land at will. Just when Rossborrough looked like he would win his first round with effective kicks and uppercuts, East barreled through with another power takedown. The round was close but it should be three rounds for East heading into the championship rounds.

Rossborrough opened up with a huge head kick that ended up causing Rossborrough to slip and East to gain top position. East started to unload as Rossborrough defended and the crowd got behind the exhausted Heavyweight. East worked position as Rossborough turtled to get to his knees. Rossborrough went to a leg lock and attacked with a knee bar that had the referee on alert. The submission looked deep but East fought out with punches and solid technical defensive grappling. East would attack Rossborrough and went to the back mount and looked to finish the champion. East pounded away with huge punches and it looked again as if he would get the stoppage but Rossborrough showed HUGE heart in surviving. The round ends and it should be four to zero for East but he looked exhausted to end that round with his hands on his knees. Rossborrough has one round to catch a finish.

The two tired fighters began slow, circling each other. Rossborrough unwisely shot in for a single and East sprawled to top position looking to land ground and pound. East would get to side control and had control of the head. While Rossborrough shrimped, East looked to hold position as I am sure his corner told him he was up in the score cards. East would stay in position landing peppering strikes to a nearly flattened out Champion. Rossborrough looked too exhausted to form any sort of offense or defense and East stayed busy enough to keep the fight grounded. Towards the end of the round, East unleashed some heavy hammerfists and with that he should win the round and capture the title. Bringing back another KOTC title to New Mexico.

SWFight.com names 5 things to watch for tonight at King of the Cage “East vs. West”