King of the Cage “East vs. West”: Albuquerque Kickboxing’s Jacob Espana is much more then meets the eye 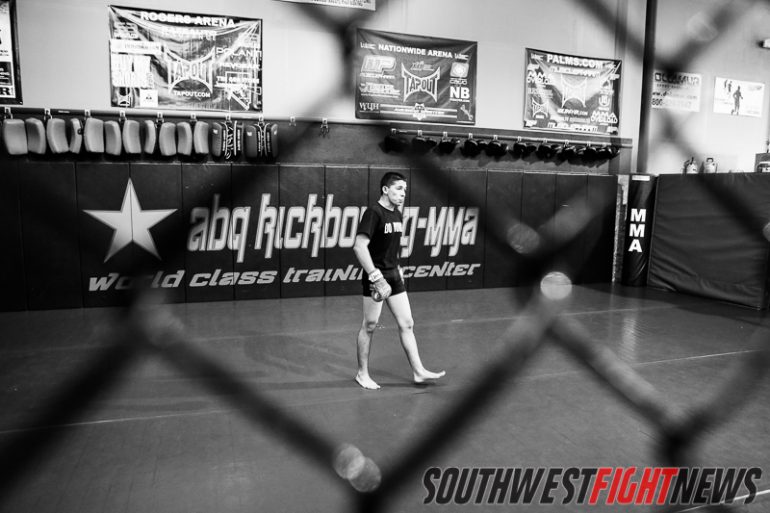 When King of the Cage announced its first show of 2013 in Albuquerque and within New Mexico, it may not have been apparent as to how intriguing the fight card would be. The event titled “East vs. West” is full of interesting story lines and match ups. The main event features New Mexico’s Cody East fighting for the Heavyweight title, the co-main event features Amateur Champion Tim Sosa making his professional debut and the undercard is full of notable names from all around the state.

While the undercard is full of talented amateurs, Jacob Espana (1-0) stands out to be a fighter that fight fans should really be able to get behind this weekend. Scheduled for June 22nd inside the Sunshine Theater in downtown Albuquerque, Espana is matched up with Kyle Platero from Grants and representing the J5 MMA gym.

In context of the amateur ranks, Espana is very well rounded despite his inexperience fighting in MMA. With just one fight, you’d likely tend to believe a fighter is still very raw and very green. That isn’t exactly the case with Espana who has extensive experience in several areas of martial arts starting with what many consider as the best base for mixed martial arts.

Jacob Espana is a talented wrestler.

During his wrestling career at Volcano Vista High School, Espana trained under Jimmy Melek and MMA fighter Mikey Lovato who have produced several high level wrestlers in their time as coaches. Espana captured championship glory when he won the Southwest Wrestling National Championship tournament and was part of a squad his junior year that won the team state title. While many wrestlers excel in a single form of wrestling, Espana excelled in collegiate, freestyle and Greco-Roman wrestling forms as a New Mexico All-Star.

Where his limitations begin in MMA with a wrestling base, his grappling acumen begins to transcend into his skill set. Where many wrestlers falter is at the submission level and that is another area Espana shines. Training at the Clube De Pitbull Brazilian Jiu Jitsu School, Espana is a four-stripe blue belt that has won the New Mexico State Grappling Tourney, a Colorado State Grappling Tourney, two NAGA tournaments and has won several matches in New Mexico’s Grapplefest.

It becomes apparent quickly that the young prospect from Albuquerque is a talented ground fighter and if you think that is where his talent ends then you’d be in a heap of bad assumptions. Espana started training under Coach Ray Yee at Albuquerque Kickboxing Academy over a year ago to work on his Muay Thai and MMA skills. Immediately Coach Yee had Espana training with the competition team and in that short time span has begun working in an intern program with the gym to begin as an assistant coach under Coach Yee.

Coach Yee had high compliments of Espana, sharing with SWFight.com some very insightful comments. Coach Yee told SWFight.com, “Jacob is a sponge when it comes to martial arts and training. He has an amazing work ethic that you’d expect from a wrestling up-bringing and has excelled in the arts of Muay Thai and Brazilian Jiu Jitsu.”

If that wasn’t enough to have fight fans pledge their support, Espana up until recently held two jobs while training full time. He is a full-time student at UNM representing the Sigma Chi fraternity. It is unclear so soon to know what his ceiling of potential truly is, but it can be clearly seen that Espana has a bright future ahead.

Saturday’s fight will be Espana’s second MMA bout having fought his debut fight for the Southwest MMA promotion where he beat a Carlsbad fighter via submission. His opponent swung wildly and Espana weathered the early storm before shooting in for a takedown where Espana would use solid position to land some ground punches. After connecting with his ground and pound, Espana’s opponent would roll over exposing his back where the blue belt would see the opening to sink in the fight ending rear-naked choke.

If Espana’s first MMA bout and thorough martial arts background has any bearing as to his skills as a martial artist, fight fans in attendance Saturday night should be in for a treat. Stay tuned to SWFight.com for more fight coverage and updates and make sure to send some support in the way of the hard working athletes participating this weekend.

“King Mo”, Jacob Noe set to face off in tournament finals at Bellator 97 in Rio Rancho