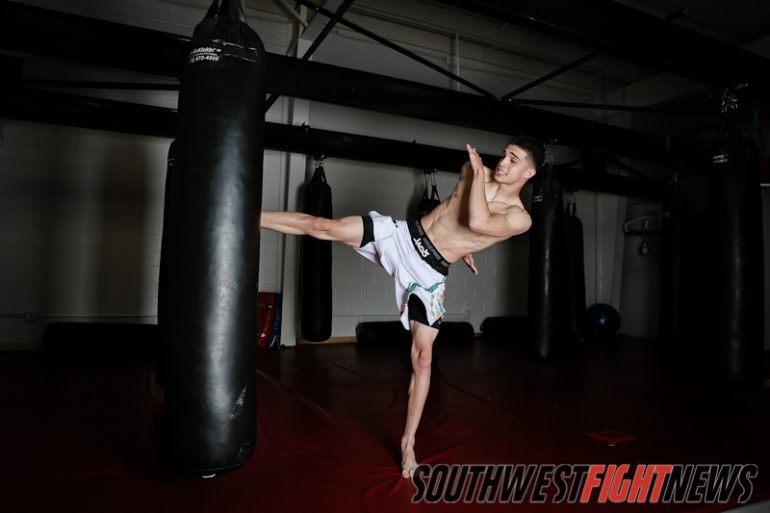 There are rare instances in sports where it is quite obvious that an athlete will be successful before they even make their name known in their respective sport. Sometimes it has to do with the athlete’s work ethic and embracing of the grind; it involves the natural talent and ability that sets the athlete apart from others sitting parallel to them and most of the time it quite simply involves that intuitive feeling that the athlete just has that special feeling about them.

While his name may not be popular amidst conversations in combat sports gyms within New Mexico, Judgement MMA and Alchemy BJJ’s Jerome Rivera has special written all over. The 18-year old Rivera lives in Santa Fe and has already committed and sacrificed so much into combat sports you would’ve thought he has already been competing for years.

The truth is that Rivera will be making his amateur MMA debut on Saturday night inside the Sunshine Theater. June 22nd is the date of King of the Cage “East vs. West” and the event card is stacked with local talent from all around New Mexico. Rivera will be one of the promotions youngest competitors as he just turned eighteen this past April and one of the most unknown to fight fans when they see the fight card.

Rivera has roots in just about every facet of combat sports starting from Jiu Jitsu and now includes boxing, kickboxing and Muay Thai. Success has been part of the combat history for Rivera and it started with taking home several first place medals from New Mexico’s premier grappling competition “Grapplefest”. Starting as a beginner, Rivera progressed through the ranks with stops in the intermediate and advanced teen divisions and most recent competing in the men’s divisions.

A Blue Belt under Jiu Jitsu Coach Benjahmin Sandoval of Alchemy BJJ, Rivera’s tall frame makes going to the ground a risk many do not enjoy once they get there. While it makes for highly effective grappling, the long limbs also have made their presence felt when competing in striking based competitions. Under the tutelage of Judgement MMA’s Head Coach Scott Marlowe, Rivera’s striking has become just as dangerous as his ground game which was best shown in his addition of an amateur kickboxing title that he won last year.

While the accolades and awards speak volumes for the young fighter, it is his work ethic that really makes Rivera an athlete to really keep any eye on. While he spends time between both Santa Fe and Rio Rancho for his training, Rivera has been exposed to the hard work based lifestyle needed to succeed in this sport by 20-fight veteran Joshua Montoya. Of course many know Montoya has one of the more notable names in the regional circle of New Mexico combat having fought for not only King of the Cage but Bellator MMA, Evolution Combat Sports and Ring of Combat. Montoya has been in the cage with fighters like Abel Cullum, Rafael “Barata” de Freitas and Jason Sampson and through his extensive knowledge and experience within MMA, Rivera has been exposed to more then his age could possibly suggest.

Committing to a full time training regiment alongside a job and pursuit of education, Rivera has developed a work ethic that rivals established fighters. Rivera has yet to lose back to back fights which at his age impressively shows both that he works hard to progress and he has the desire to succeed. Those ingredients mixed with his natural talents make him a very dangerous fighter.

Look our for the dangerous arsenal of Rivera this weekend as the 18-year old looks to make a successful splash in yet another combat sports discipline. The Jiu Jitsu and striking enthusiast can take that step from debut fighter to one of New Mexico’s up and coming prospects with a good showing on Saturday night.

Rivera takes on Adrian Lopez from who is also making his amateur debut and will be representing the Get Fit Fight gym. The two will square off on what is expected to be an exciting undercard of amateur mixed martial arts and SWFight.com will be live inside the Sunshine Theater on Saturday night to bring you live updates. Stay tuned for more event coverage, fighter analysis and fight breakdowns.

“King Mo”, Jacob Noe set to face off in tournament finals at Bellator 97 in Rio Rancho