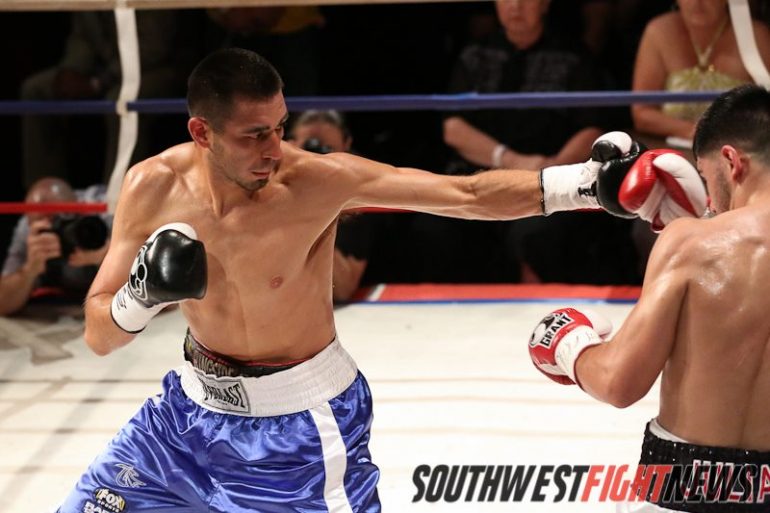 When a young up and coming prospect is set to go up against a tested veteran fighter it is usually a forgone conclusion that the veteran was put in a no-win situation.

This Friday night’s Joe Gomez (18-7-1, 8KOs) vs. Cristian Cabral (5-0-1, 3KOs) Aztec Warriors main event at the Albuquerque Convention Center in downtown Albuquerque, New Mexico is anything but an obvious foreshadowed result as both sides have now planned to hurt the other.

“I’m gonna do work on this kid,” says a confident 29-year-old Gomez, nine years the elder of Cabral. “I don’t want to sound big-headed but this is a different training camp

from what I’ve had.”

The difference is that Gomez has been in the gym since October and as had two solid months worth of a full training camp in preparation for this weekend’s card. Ample time to lose weight, nothing like having to drop nearly 30lbs in three weeks like his previous match.

In that July outing against New Mexico welterweight kingpin Josh Torres, Gomez weighed in at 148.5lbs, by far the lightest he ever has before a fight since 2008. The contest against Torres was a grueling power punching presentation by both pugilists. Torres came away with a narrow split-decision but Gomez, despite draining himself to make the fight possible, many New Mexican professional boxers on hand felt came away with the victory; Cabral was among them.

Gomez has fought most of his career at the light middleweight and middleweight classes. Against no slouches either. You can count undefeated El Paso prospect Abraham Han, recent world title challenger Alfredo Angulo and Patrick Majewski, who will be challenging Marco Antonio Rubio next month for the interim WBC middleweight title, as some of the top competitors Gomez has faced.

Whether it is because he is battle tested or seen as an easy target Gomez’ phone continues to ring. “I was getting a lot of calls from matchmakers to get fights on two weeks notice but I wasn’t training,” he says.

Joe Gomez and his team pose for a photo after his war with Josh Torres last July.

Incorporating marathon running into his new training regiment, Gomez, believes it will give him an edge in the six-round fight.

This past October at the Shiprock Marathon, Gomez, finished 22nd out of more than 1,600 participants; this was the first marathon he had ever participated in. The following month in his first half-marathon in Farmington he finished in first place.

It does not hurt that his employers at Conoco Phillips where he works as Chemical Corrosion Technician themselves work around his training for bouts. Gomez’ daily routine includes getting up at 4:30am to go to gym to work out. Going to work until 2 or 3 four days a week and train into the evening at his home gym.

Despite the fact that no one has brought it up publicly Gomez, believes that people are underestimating mostly because of what he thinks others see as a change in trainer. For a long stretch of his career Gomez, was trained by his uncle Dominic Martinez. For personal reasons his uncle has stepped aside and the reigns for the match-up against Cabral have gone to Larry and Lorenzo Whitey brothers, and longtime trainers and operators of the Bloomfield Boxing Club. The change in coaching Gomez says will not hinder his way to being victorious Friday night.

In a recent interview with us, Cabral’s trainer Ray Zamora, predicted that his fighter would stop Gomez.”I’m glad that they think that,” says Gomez. “He’s gonna realize it’s not going to happen when he gets hit by me.”