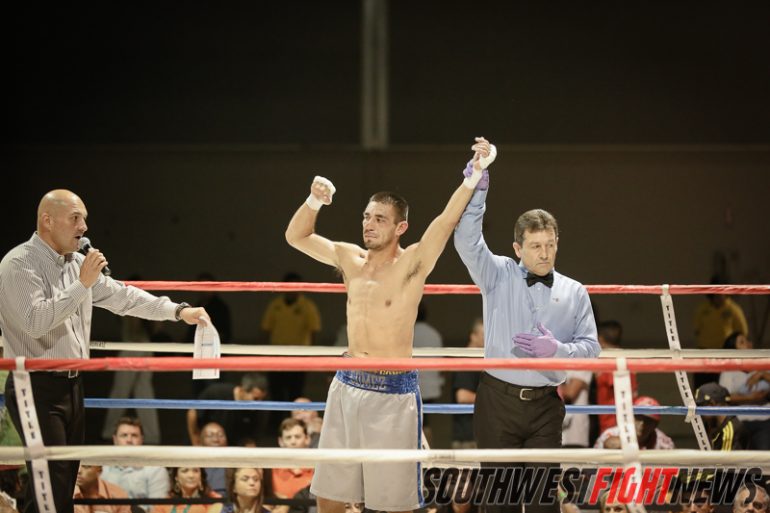 In front of a small crowd of about 250 fans at the Albuquerque Convention Center one of New Mexico’s most tried fighters, Joseph Gomez, went up against one of its undefeated but untested in Cristian Cabral on Chavez Promotions – Aztec Warriors boxing card.

The initial round started with Cabral doubling and tripling up his punches. As expected Gomez who was shaking off ring rust from almost a year of inactivity was slow in warming up and trying to time Cabral’s combination with a one-time counter.

An onslaught of punches from Cabral awaited Gomez out of the gate to start the second. The veteran fighter continued to try to weather the light storm with one big counter which would not come. He would instead find success against the ropes implementing a huge body attack on Cabral who would end the brief scuffle with a sneaky right uppercut.

As the two men met against the ropes a second time, it would be a short left hook from Gomez as Cabral attempted to duck that would serve as the cause of a swollen eye the undefeated fighter would have to deal with for the longevity of the match. The wound to media at ringside appeared to be caused by a follow through elbow from Gomez‘ errant punch.

The right eye continued to close as Cabral would also have to deal with a lightly bleeding nose in the third. He would eat left hooks and body punches, trying to defend himself from the outside. Gomez appeared to have his opponent confused stalking him around the ring. A halt to the action due to an untied right shoe bought some time for Cabral whom once action resumed was reluctant to come inside would easily give the third to Gomez.

In fourth Cabral’s plan was to be first on everything. He was extremely aggressive but the far more experienced Gomez would sidestep him and land flush one-time body hooks to each side. The blows would hurt Cabral as he would lean his back against the ropes to buy himself time but the crafty Gomez would make him pay staying busy on the inside. The adroit 26-fight veteran would grapple and position Cabral for meaningful shots that would set the stage for what would be the final round.

A very fresh Gomez greeted the jumpy “Puma” in the middle of the ring continuously peppering Cabral with a long jab then eventually against the ropes. A big straight right from Gomez would lead to a short exchange that ended with a left hand, right uppercut finish from Cabral. Realizing his arm length disadvantage Cabral would finally work the inside impeding Gomez from landing a clean shot.

A huge left hook to the body would momentarily crumple Cabral sending him in retreat to the adjacent ropes. The area he looked for as a haven would be where his undefeated campaign would end. After receiving what appeared to be 10 consecutive body and head shots the referee would jump in and stop the contest at 02:45 of the fifth round.

“I thought it was too early,” said Cabral of the stoppage, in a post fight interview.

“I care about him; he’s like my son,” said Cabral’s trainer Ray Zamora. “I was gonna throw in the towel too but I know him he works off the ropes.”

“It’s a learning experience,” said a smirking Cabral. “I’m not going to quit.”

Cabral also admitted to not wanting an immediate rematch instead hoping for something against Gomez four or five fights down the line.

“I did notice a lot of inexperience,” said Gomez. “I was reserving myself and picking my shots.”

With the victory Gomez picks up his first victory in 15 months. Despite this fight being believed to earn the winner a shot at New Mexico welterweight king Josh Torres, Gomez is in no rush to call anyone out.

“If it’s Josh it’s Josh,” he says. “If it’s the guy from Colorado (John Ryan Grimaldo), I heard he wanted the winner of this fight.”

“I plan on being more active this year,” says Gomez. “I want to fight every two months; every month, as often as I can.”

Crespin Closes Out Castillo by UD

In a battle of middleweights Las Vegas’ Arturo Crespin used volume punching to walk through Albuquerquean Jose Cruz Castillo. Unable to effectively counter Crespin’s wide punches Castillo was forced to try to land one-time shots. When Castillo would land they would not have a big impact as he was unable to sit on his punches.

Crespin showed an improvement in this rematch with regards to stamina. During the middle rounds he wisely took time to pace himself and outwork Castillo once regaining his breath.

The Queen of War Victoria Cisneros, took the first round to feel out her opponent but from that point on her aggressiveness backed Kita Watkins down. As Watkins would become more flatfooted in the later rounds, Cisneros would equal the volume of all her opponents punches with power shots alone.

In the opening bout of the evening Robert Josh Chavez used a long lead left jab to keep Mike Quezada at bay all the way to a victory. The taller and longer Chavez also had no trouble staying away from Quezada‘s lunging punches.