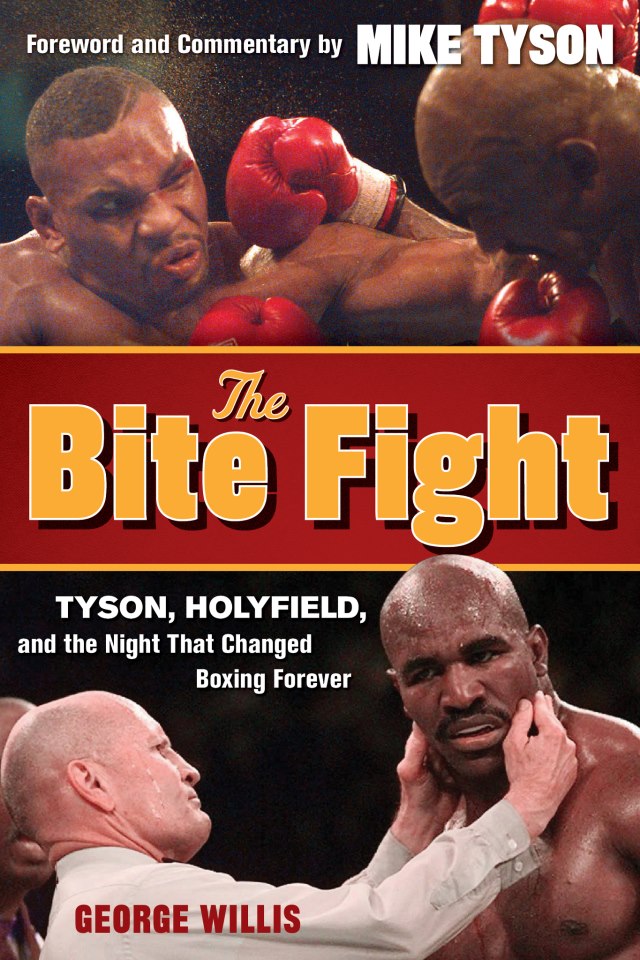 This afternoon New York Post Sports Columnist and New Mexico State University alum George Willis will be in his hometown of Las Cruces, New Mexico promoting his first book “The Bite Fight”, and will serve as a guest speaker later this evening at the New Mexico Boxing Hall of Fame Induction Ceremony.

Willis will be on hand to promote his book and sign copies at Barnes and Noble inside the Mesilla Valley Mall from 1pm-3pm followed by a visit to the Las Cruces Boys and Girls Club from 4pm-6pm.

The book recounts the infamous June 28, 1997 boxing rematch that took place between Mike Tyson and Evander Holyfield. The fight would go down in boxing and pop culture history as the one that ended prematurely in the third round by disqualification due to Tyson inexplicably biting off part of Holyfield’s ear.

In his new book Willis, who also serves as a boxing reporter at the New York Post, recounts the boxing rematch between Tyson and then WBA Heavyweight Champion Holyfield. The fight would go down in boxing and pop culture history as the one that ended prematurely in the third round by disqualification due to Tyson inexplicably biting off part of Holyfield’s ear.

The fight at the time was highest grossing boxing match in history in all categories: A crowd of 18,187 were at the MGM Grand Garden Arena, the gate raked in a total of $17,277,000 a record broken this week by the upcoming Floyd Mayweather vs. Saul “Canelo” Alvarez match. It also held the record for the most domestic pay-per-view buys totaling more than 1.99 million, generating a flabbergasting $99,822,000.

In the book Willis, breaks down the gruesome fight, and the ongoing aftermath of that one scandalous night and explains how much impact it really had on the sport.

Recently, SWFight.com had the chance to have a Question and Answer session with Willis to discuss his book and the honor of being a guest speaker at tonight’s New Mexico Boxing Hall of Fame.

“The Bite Fight” is available for purchase at bookstores everywhere and http://www.amazon.com/.

SWFight: This is your first book. Was it a difficult process?

George: Fortunately, I’ve been covering boxing on a national basis since 2002. I knew a lot of the principles involved and where to go find information about the fight. A lot of them were friends of mine. I was fortunate at times to find people I didn’t know.

SWFight: The fight, and the actual bite, had three primary participants: Mike Tyson, Evander Holyfield and referee Mills Lane. How did each of them play a role in your book?

George: I had an extensive conversation with Mike Tyson and a long conversation Evander. Mills Lane, as you know, had a suffered a stroke a few years back; his sons Terry and Tommy were great resources on what their father was thinking. (Mills) actually wrote a book on the bite.

SWFight: The book also coincides with the recent induction of Mills Lane to the International Boxing Hall of Fame.

George: The Hall of Fame was a great honor for him. I’m glad he was able to attend. Mills’ book took you into his thinking during the fight. Mitch Halpern was actually the one that was supposed to referee that fight. The Tyson camp didn’t want the same referee as their first fight. The Nevada Commission voted in supporting Halpern but Halpern pulled himself out.

It was the first time anything like that had happened. To get inside what was in his mind is in the book. Terry and Tommy sent me a lot of interviews of his father.

SWFight: Where were you the night the fight happened?

George: I was actually in Little Rock, AR with my in-laws and friends watching it on pay-per-view just like other millions of people. I was totally stunned by what (Tyson) did in the ring. It was quite an astonishing. The fan man, when people talk about the bite fight. It was a unique.

When you read the book you sort of get brought up the point of what Tyson had gone through a lot with the deaths of “Cus” D’Amato (trainer) and Jimmy Jacobs (friend and co-manager), and the soap opera with Robin Givens. His trainer and everyone else were just “yes” men. He had gotten away from the discipline.

SWFight: What are some unique stories you share in the book; without giving out too much?

George:  There’s a story that not many people know about Evander, biting someone during a fight as an amateur. The new things in the book are like that. A lot of people talk that there is nothing new about “The Bite Fight” but there’s a lot of detail with what was going on in the fight and why the Vegas police acted like they did that night. They were being cautious; the Tupac Shakur incident had happened a few months before.

SWFight: You’ll be a guest speaker at the New Mexico Boxing Hall of Fame Induction Ceremony. How does it feel to be chosen as a keynote speaker?

George: It’s going to be an honor to be there because I basically started my career as the Las Cruces Sun News. I’m also really good friends with Louie Burke (Austin Trout’s trainer). I’ve known him since 6th grade. Back then Rocky (Louie’s brothers) was fighting Louie hadn’t started his professional career. Austin Trout (2013 New Mexico Boxing Hall of Fame Inductee) has on my radar for a few years basically because I heard how good he was from Louie. This is well before he won the world championship. I was touting Austin when people didn’t think he was worthy. It’ll good to be back home.
***
For more information on the book please visit the book’s Facebook page https://www.facebook.com/TheBiteFight.