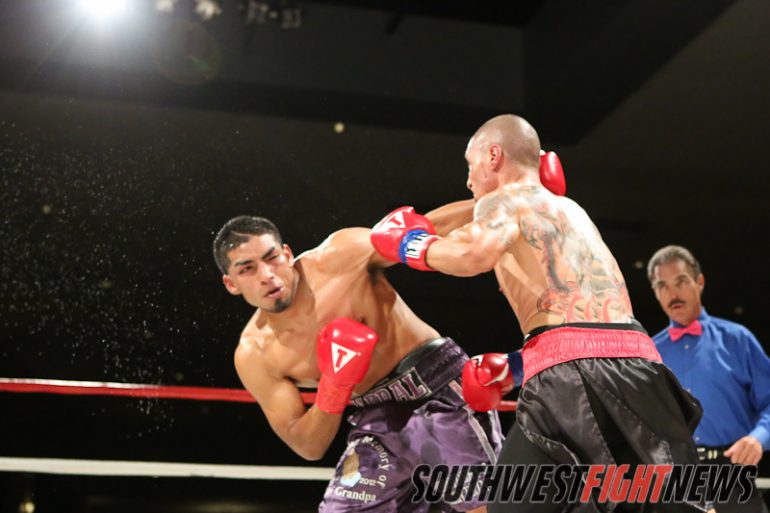 Next Friday’s bout against Joseph Gomez might not launch Cristian Cabral into stardom but with a victory it will serve as a stepping stone into regional recognition.

Cabral (5-0-1. 3KOs) impressed many in his last outing when he took on hybrid fighter Donald Sanchez, a former King of the Cage Champion in MMA. Sanchez was undefeated at the time as a professional boxer. Cabral weighed in at an flabbergasting 143lbs, four pounds below the welterweight limit of 147lbs.

Many reporters picked Sanchez to win the contest based off the weigh-in disparity and overall fighting experience. Sanchez came into the fight with over 40 career bouts in MMA and boxing. Were they ever proven wrong. Cabral would go on to put on a masterful performance and showed that he could mix technique with power.

In Gomez (18-7-1, 8KOs ), he will see the toughest boxer of his career. A tested gritty fighter who has fought in multiple

weight-classes with the likes of title contender Alfredo Angulo, at light middleweight and top El Paso prospect Abraham Han at middleweight. Last July Gomez also gave current New Mexico Welterweight King Josh Torres a run for his money, losing a six round split decision, in what despite losing, might be one of the best performance of his career. After the fight Gomez said that he felt that welterweight is where he belongs.

In the same venue he will headline next Friday night Cabral fought what many think is his most controversial contest against Michael Coca Gallegos this past October. The majority of fans present at the fight saw the match in favor of Coca Gallegos while 5 ringside writers, whether they admit it or not (one in particular changed his opinion a week later) had the it in favor of Cabral. The judges matched what the fans and media thought scoring the fight a draw.

The bout between Cabral and Gomez many hope is the middle of an unofficial round robin tournament of sorts between the two and Torres. There is no guarantee that the winner will face Torres in the immediate future. With an impressive win Cabral should be considered one of the top five pound for pound boxers in the state of New Mexico.

Check out our interview with Cabral on his upcoming fight against Gomez:

King of the Cage “East vs. West” Weigh In Results