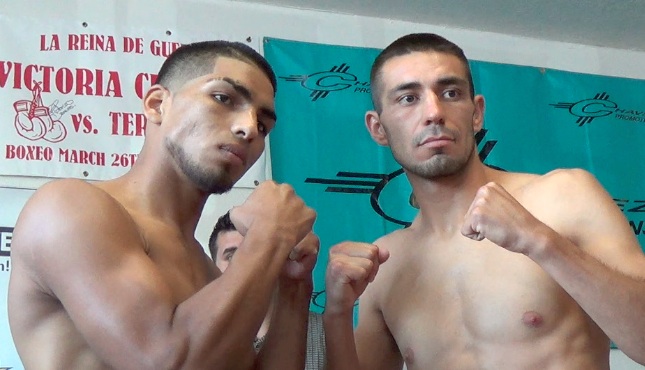 Earlier today the official weigh-ins for Friday night’s Chavez Promotions Aztec Warriors took place today at La Reina De Guerra in the Albuquerque’s South Valley. The small building was packed with friends, families and teammates of the fighters on the card.

Tickets to the fights which will take place at the Albuquerque Convention Center are still available and can be purchased at the door. You can also reserve tickets by contacting Isabel Chavez at 261-1502. Tickets are priced at: $25 for general, $45 for prefered, and $85 for ringside. Doors open at 6pm with fights expected to start at 7pm.

*Crespin was not present at the time of the official weigh-in. According to the promoters Crespin had issues with traffic while driving in from his hometown of Las Vegas, New Mexico..He did arrive an hour later and weighed in two pounds over the 156lb +/-2 limit. A finiancal agreement was made between Crespin and Castillo’s camp. The fight will still take place.