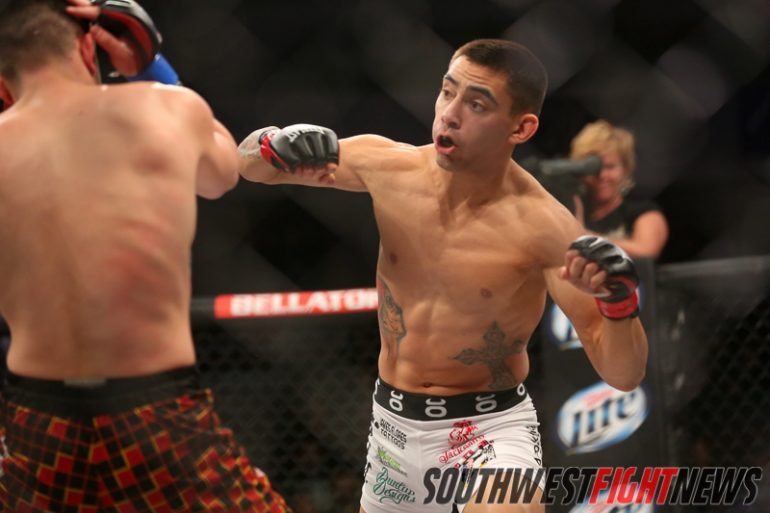 The “Bullet” is heading back into MMA action after taking less than two weeks to recover from his last bout. Tonight, Andres “Bullet” Quintana (5-1) will be fighting for Ayala Promotions in Scottsdale, Arizona. The 145-pound featherweight Quintana just competed in Mexico at the Chinaco MMA event where he scored a TKO victory over Bushido MMA’s Brian Castillo.

Up next for Quintana is Cody “Crazy Legs” Huard (4-1) of Surprise, Arizona. Huard is a regional fighter and veteran of the Gladiator Challenge promotion. In all four of his career victories, Huard has finished his opponent with strikes or a submission but has no record of fighting since late-2011. Up to that point, his lone career defeat was to Freddie Lux, who might be familiar to New Mexico fight fans as he defeated both “Ox” Wheeler and Nick Urso in New Mexico events.

As many fight fans know by now, Quintana is amongst the brightest young prospects in our entire state. Beaming with potential, the Roswell native is coming out of the Mean1 MMA camp with momentum on his side as well as loads of activity. Quintana will have fought three times in a span of less then three months starting with his promotional debut under the Bellator banner.

In that February 28th bout, on the undercard of Bellator 91, Quintana stepped in on short notice to face off with Lovato Total Fitness fighter Russell Wilson. The fight would go back and forth until a well timed knee would stun Wilson and allow Quintana to attack heavy with a barrage of punches en route to a referee stoppage. Quintana followed that up with his stoppage of Castillo in Mexico that was also started with a knee.

The technical improvements seen in Quintana after each and every outing are indicative to his status as a top prospect. With an excellent camp behind him and the athletic tools he has already been blessed with, Quintana is a fighter to keep an eye on as he continues on his path of success. A win over Huard adds another coveted “W” on the resume and may be the one needed to get the call to a big promotion.

Stay tuned to SWFight.com for fight results and analysis and as always we encourage fight fans to send a local, hard working athlete support in his travels and fight endeavors.