Mary McGee Plans to Beat Holly Holm Back Into Boxing 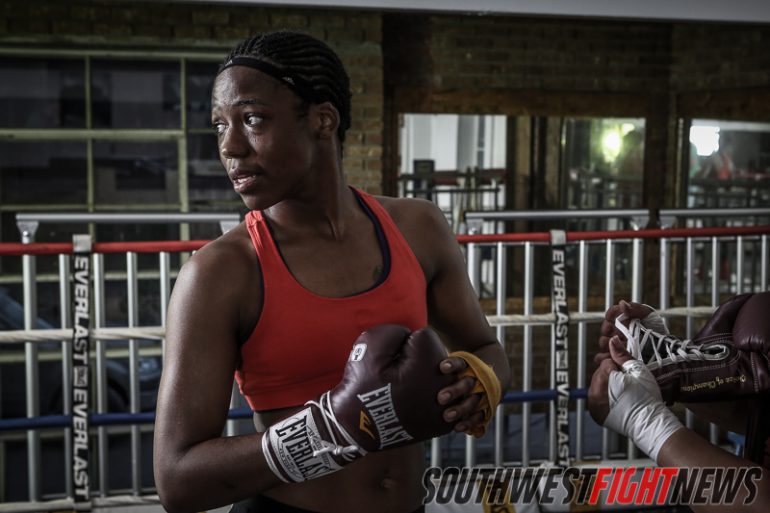 Escaping the streets of a rough city can seem like a never-ending exodus. If one is not consumed by the environment itself it is simply life that takes over them or their loved ones. For Gary, Indiana’s Mary McGee (20-1, 11KOs) boxing has provided a haven but it is the real world that has given her the biggest fight.

So far the keystone victory in McGee’s career is a majority decision over Kristy Follmar in February of 2010 to claim the vacant WBC International Lightweight Title. It would quickly be overshadowed by the events that would take place the following months.

her older brother Maurice was murdered and the passing of her trainer Octavius James. Following their deaths McGee would go 10 months without a fight before finally facing Brooke Deirdorff who at just 5-4-1 was coming off a monumental upset victory over Mia St. John. McGee would lose a close six-round unanimous decision to Deirdorff and not fight for nearly a year and half after it.

The spirit that drives residents of rust belt cities would reflect in McGee’s next three fights where she would bounce back from her first loss with two easy unanmious decision victories and a third fight, on what she says was three days notice, this past December on the Holly Holm vs. Diana Prazak undercard where she easily stopped local Albuquerque favorite Victoria Cisneros.

“I was eating Thanksgiving dinner when they first called me about it,” says McGee who was 12 pounds over the 140 lb. light welterweight limit they wanted here to fight Cisneros at. “I’m used to getting calls for fights and them falling through. I told them I would have to go over everything with my manager before accepting (the fight).”

Hailing from a steel producing midwest town where McGee was raised by her maternal grandparents, it would be her attraction to physically fit teenaged boys that would first lead her to the Gary Police Athletic League (PAL) boxing gym.

“I was a cheerleader in high school and there was a boy there who said he was boxing at Gary PAL,” laughs McGee a graduate of Theodore Roosevelt High School. “I said ‘Well I’m going, I’m gonna train’, so I went down there with the guy because I knew there’d be guys in shape.”

Once a bustling industrial town Gary has lost more than half of its population since the 1960s with the fall of the metal industry.

“Gary is nothing like Albuquerque, it’s rougher there,” explains McGee. “Trying to come up in boxing was pretty difficult in Gary.” In fact the city which makes up part of the Chicago metropolitan area has only had one native world champion in former middleweight Tony Zale.

This weekend McGee will look to become the first world champion from Gary in 65 years having to do it by facing arguably one of the top three female boxers of all time Holly Holm (32-2-3, 9KOs).

“I have respect for what she’s done in her career but at the end of the day I’m a fighter,” says McGee. “I feel that I have the skills and the will to win this fight.”

McGee looks to play spoiler this week in a fight many boxing pundits believe she has a small chance in against Holm who herself recently announced that this contest will be her last in boxing and will transition full time to mixed martial arts.

“I want to beat her back into boxing,” says McGee. “I want to take those titles so she wants to come back to the sport.”

Doors open at 6PM with the first fight starting at 7PM. Tickets can be purchased by visiting HoldMyTicket.com.

Check out our full interview with Mary McGee…

Fight Introduction: Keep an eye out for Jordan Espinosa