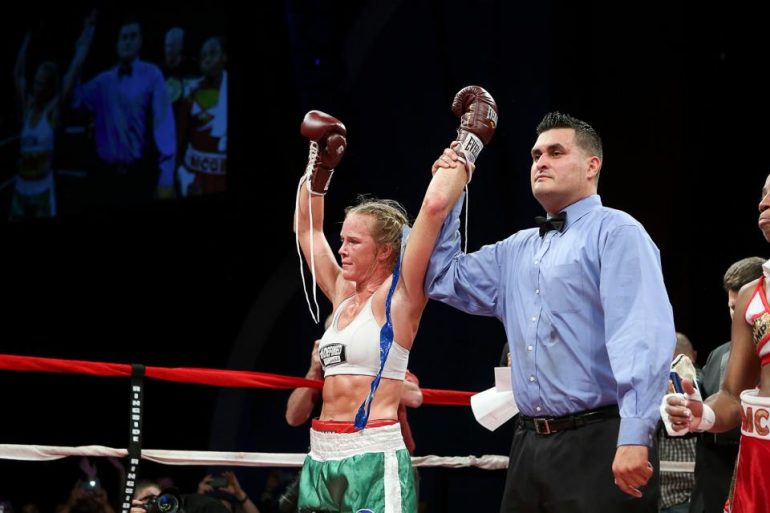 A chapter in women’s boxing history closed last night as Holly Holm was victorious in her final match in the sport against Mary McGee in a light welterweight contest. Nearly 3,000 fans were on hand at the Route 66 Casino in Albuquerque, New Mexico to pay homage to the 11 years of service Holm has provided to boxing.

Holm looked anything but a fighter ready for retirement. She extremely elusive and punched with more power than she has displayed in quite sometime.

From onset the southpaw Holm would use her footwork to jump into McGee and fire off one-two combinations which McGee, usually a very good counter puncher was unable to combat due to the speed of Holm’s feet. McGee would try to force the action by running at Holm (literally) in the early rounds.

She would soon realize that the move up to her walk-around weight of 140-pounds to take one a fighter in Holm who has fought at light middleweight and probably at that weight fight night, may have not been a good idea.

“She’s stronger than I thought she would be.” admitted McGee. “I don’t know if it was because of the size but she was pretty strong.”

The middle rounds is when Holm started to initiate her feints to which McGee would bite by either covering up or backing up. Holm would then attack the body or shoot straight punches right up the middle.

In final half of the fight Holm would uncharacteristically throw several powershots in a row in an attempt to end the contest. She would come close but McGee’s strong chin and will would not give way to Holm’s 10th career knockout.

Despite the loss McGee finds herself as the mandatory opponent at lightweight for Argentina’s Erica Farias. The interest in the Holm-McGee fight drew so much interest in Argentina that TyC Sports in nations capital Bueno Aires purchased rights to show the fight. As is in the modern-age several unauthorized streaming websites showed the fight live online worldwide.

With Holm’s departure, for the first time since 2004, New Mexico will be left without a boxing world champion.

“We’re still here. Austin Trout is still here. I can guarantee it; he is gonna come back stornger than ever.” affirms Holm. “I’m still here and hopefully I can be a champ in MMA, you never know.”
Holly Holm vs. Mary McGee Full Fight
[youtube id= “-7S_Wi2dVa0″ width=”600″ height=”350”]